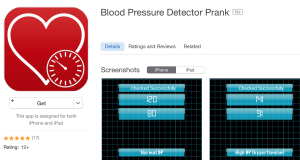 Nearly two thirds of Americans have smartphones and are increasingly using these devices to manage their health. And there are a growing number of health apps out to help.

Finding the right ones, however, can be a challenge. A recent study looking at depression apps found that less than a quarter of the apps resulting from a search using the word “depression” were actually relevant1.

And among those apps, the quality and validity of apps varies widely. While there are certainly useful apps available, they can be tough to identify. For consumers, the most readily available resource to determine whether an app is worth trying out or not are the ratings.

There is, however, a growing body of evidence that app store user ratings are totally unrelated to the quality and effectiveness of medical apps.

In a study of hypertension apps, Kumar et al evaluated over one hundred apps intended for use for patients with high blood pressure. When they looked at app characteristics that predicted favorable user ratings among Android apps, they found that the strongest predictor of a good rating was if the app claimed to actually measure blood pressure using just the phone – a completely baseless and irresponsible claim (incidence rate ratio 1204 vs. 157 for tracking function and 8.58 for free). 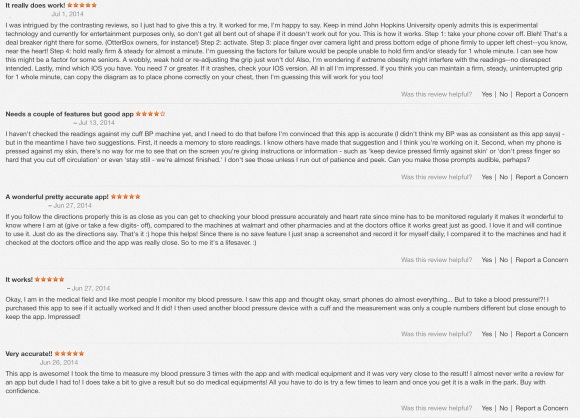 In another study we recently covered on apps for bipolar disorder, researchers found similar findings. In that study, they looked at just under one hundred apps using detailed evaluation criteria based on clinical practice guidelines. As Nicholas et al describe, “Neither comprehensiveness of psychoeducation information (r=-.11, P=.80) nor information quality (r=-.02, P=.96) were significantly correlated with average user ratings.”

Yet another study by Abroms et al looked at smoking cessation apps and evaluated their adherence to clinical guidelines. They reported a correlation between user ratings and adherence for Android apps; the reported r value of 0.32 however suggests that the correlation was quite weak. When they looked at iPhone apps, the relationship was even weaker (r=0.29, p<0.1).

Overall, these studies highlight the challenges patients face when trying to find effective, safe apps to help manage their health. We’ve covered useful apps for everyone one of the the above described health conditions: hypertension, smoking, and depression. However, these apps aren’t necessarily at the top of search results nor are they necessarily the highest rated.

Hopefully, with the focus on health from both Apple and Google, we’ll see some changes to improve the usefulness of user reviews such as a more effective “review of reviews” system analogous to Amazon’s rating system. Its also important for patients to discuss apps they are using to manage their health with their physician. Finally, resources that identify and disseminate effective, evidence based apps can help ensure that patients discover the right health apps for their needs.