Yelp’s addition of health metrics into doctor reviews has pitfalls 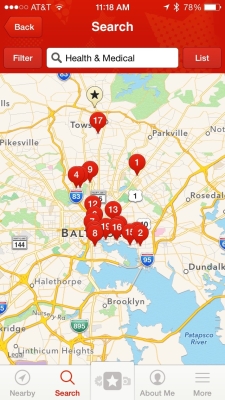 Patients have been able to post reviews of doctors and healthcare facilities for a long time. On my own periodic tours of Yelp reviews in healthcare, it’s really not that useful. For example, searching for reviews of pediatricians in Baltimore returns about 20 reviews and about six of those are for the Kennedy Krieger Institute, a specialized pediatrics center for kids with neurological and development disorders.

However, Yelp has a unique opportunity here in comparison to the usual players in doctor rating sites – they already have millions of people providing reviews on all sorts of things. In fact, they boast 83 million unique visitors per month. If even a small fraction of those users start providing healthcare reviews, they could change the landscape of consumer ratings in healthcare. According to an analysis by NPR, we could be heading towards that inflection point. There are almost 300,000 reviews of doctors on Yelp and the majority were posted within the past two years.

In its analysis of Yelp reviews, the NPR team found that the majority of doctor reviews were positive – five star reviews were the most common. However, the doctors with most reviews tended to have bad reviews. In other words, angry patients speak up but happy patients don’t. That’s clearly a problem for Yelp and one that’ll be harder to solve than for restaurant reviews. I doubt anyone really wants to be an “Elite” Yelper for healthcare reviews (for non-Yelpers, that’s a status you get by doing lots of reviews).

Yelp will now be adding a lot more data to those reviews. Many physicians will be familiar with ProPublica, which has published some fairly high profile reports in recent years. For example, they recently published a highly publicized surgeon scorecard, making complication rate information available for thousands of surgeons who perform eight elective procedures [Not saying this is being added to Yelp, just using it as an example. See note below]. That’s just the tip of the iceberg on the data they collect, which is captured from CMS data as well as their own research. 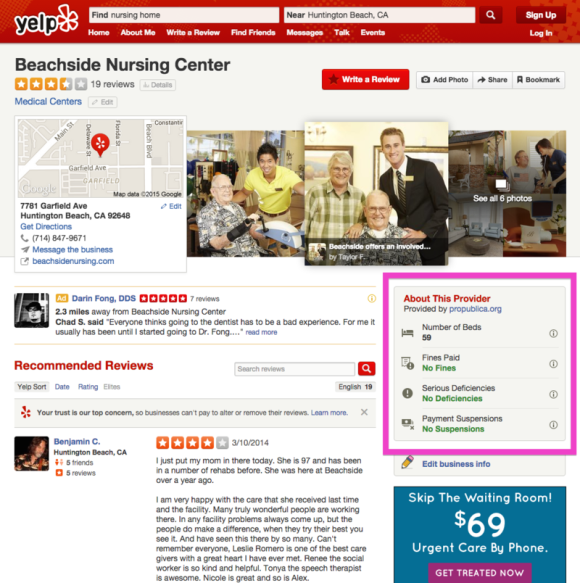 According to Yelp, they will display ProPublica data on the pages of healthcare facilities:

Hover text on the business page will explain the statistics, which include number of serious deficiencies and fines per nursing home and emergency room wait times for hospitals. For example, West Kendall Baptist Hospital has better than average doctor communication and an average 33 minute ER wait time, Beachside Nursing Center currently has no deficiencies, and San Mateo Dialysis Center has a better than average patient survival rate.

While some of ProPublica’s data may be pretty cut and dry, like code violations at a nursing home, a lot of it isn’t. In fact, a lot of these ratings are based on incomplete data and susceptible to a great deal of bias depending on methodology. There are some great discussions about the strengths and weaknesses of the surgeon scorecard and the overall challenge of ratings in medicine.

Patients want resources to help them become more informed consumers of healthcare. While I doubt their motives are entirely altruistic, we should recognize that these companies are responding to an unmet need. And whatever your opinions are about validity of Yelp doctor reviews or ProPublica ratings, that’s the information currently available to patients.

It will be interesting to see how healthcare organizations respond. With the increased attention of patient satisfaction scores, we’ve all seen and heard of some “interesting” programs in hospitals very targeted at raising that survey score. On the other hand, there have also been changes that genuinely improve the experience our patients have.

If Yelp induces a rapid growth in consumer reviews of healthcare facilities and doctors, perhaps we’ll see more of the latter at every point in the system from scheduling, to the clinic, to the lab. Or maybe we’ll start seeing Yelp coupons – free appendectomy with your cholecystectomy anyone?

Note: Just to clarify, I’m not saying that data from the Surgeon’s Scorecard is going into Yelp now. I’m using it as an example in this article to illustrate the point about the challenges and complexities or ratings in healthcare since it is a very recent example of ProPublica’s work in this space. I’d argue that similar limitations exist with data like survival rates at a dialysis center. As it stands, Yelp’s press release & the linked Washington Post story only mentions hospitals, dialysis centers, and nursing homes. In the NPR article, which is from ProPublica, they say “In addition to reading about consumers’ experiences with hospitals, nursing homes and doctors, Yelp users will see objective data about how the providers’ practice patterns compare to their peers” which does seem to hint at plans for inclusion of more than what is listed in the Washington Post article.