MyHeart Counts, an iPhone app that offers users insights into their own cardiac health while at the same time enrolling them into a large cardiology study, has released a new version that offers more valuable features.

In addition to collecting data on a subject’s physical activity and cardiac risk factors, the new version “focuses on empowering participants with more feedback about their individual behaviors and risk, based on the American Heart Association’s “Life’s Simple 7″ recommendations,” explained Tracie White, with the Stanford University School of Medicine.

The smartphone app, which is now being used by more than 41,000 people, is based on the recently released ResearchKit, Apple’s open source software that allows investigators to create customized medical research apps. The MyHeart Counts app taps the iPhone’s built-in motion sensors to collect data about the user’s physical activity and a variety of other cardiac risk factors, which is then fed into the Stanford cardiovascular research study.

With the release of a new version of the app, the researchers are now extending their reach into Hong Kong and the United Kingdom. According to Euan Ashley, MD, a professor of cardiovascular medicine at Stanford and co-investigator on the project, “We plan to add more countries every few months.”

Users who want to participate in the study answer surveys delivered to their iPhones and carry out a few simple tasks. For instance, every 3 months, they have to monitor 7 days’ worth of physical activity, complete a 6-minute walk fitness test—if they are able to–and provide risk factor information. The researchers are now providing users with a summary of their heart health and suggestions on how to improve it.

Finally, Tracie White explains that “Researchers are reporting that they have collected the most data ever on the 6-minute walk fitness test for a single study. The new version of the app will include information comparing the user’s data to others participating in the fitness test, as well as a newsfeed section that provides updates on heart health news.”

Dr. Iltifat Husain’s take on this:

Clearly, the most exciting part of news out of Stanford is the massive number of individuals enrolled in the study — but that doesn’t mean all the 41,000 study subjects are active users of the app. As the following publicly released data from the Asthma Health Research Kit app out of Mount Sanai shows, there is usually a drop off in utilization on a weekly basis. But even if the Stanford researchers are able to collect data consistently on just 10,000 users that would be huge. Any researcher will tell you how expensive subject enrollment can be as well, and ResearchKit’s electronic enrollment gives opportunities for researchers to spend precious dollars elsewhere while collecting massive amounts of rich data. 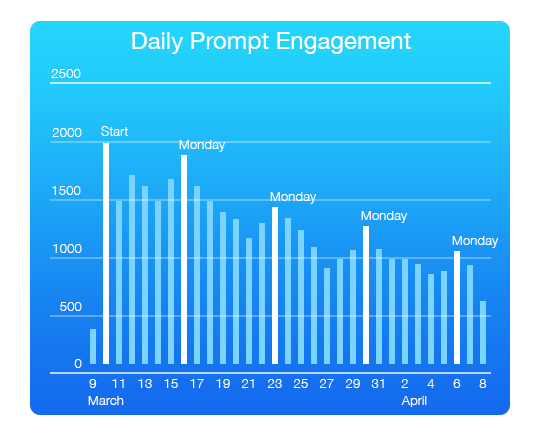