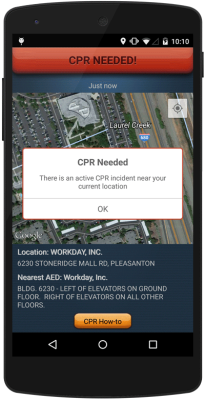 Every year, more than 300,000 people suffer an out-of-hospital cardiac arrest. And for those individuals, the prognosis is grim. Only about 7% of these patients will survive to hospital discharge. One opportunity to potentially improve outcomes for these patients is early initiation of CPR. According to the CDC, every minute that passes reduces the chances of survival by 5-10%.

A San Francisco based nonprofit is trying to help eliminate those passing minutes by engaging nearby good samaritans through their smartphones. PulsePoint signs up volunteers with CPR training who are willing to help when there is a cardiac arrest nearby. According to Richard Price, President of the PulsePoint Foundation, this platform is now live in 1,300 cities across 22 states; in San Jose, California, there are nearly 24,000 volunteers signed up.

Here’s how it works. A call comes in to the emergency response center and as soon as the dispatcher realizes it’s for a potential cardiac arrest, they activate EMS. Simultaneously they activate PulsePoint volunteers. If there’s a volunteer nearby, based on their phone’s GPS, then they get an alert with the location and directions on how to get there. 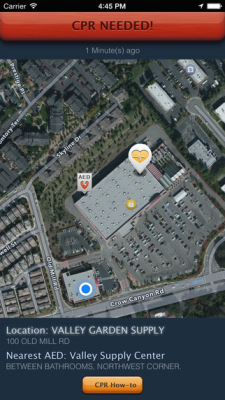 When they get there, they can start CPR if it hasn’t been initiated. Even when CPR is being done, it’s often by a distressed friend or family member who may not be doing adequate CPR (for understandable reasons) whom the volunteer can help or relieve. Mr. Price also told us that not infrequently will multiple volunteers show up and simply provide encouragement & support.

By design, each time PulsePoint rolls into a new city, they market heavily to first responders, police, and healthcare professionals so that tends to form the bulk of the volunteers. They also enroll good samaritans from the public who have obtained CPR training on their own, generally on the philosophy that this will be a pretty self-selected group.

In a recent study, a similar system was tested in Sweden where 10,000 volunteers signed up for the platform used. There, they were able to improve bystander CPR rates by about 25%.

An accompanying editorial pointed out several barriers that would make such a system difficult to implement in the United States. I spoke to Mr. Price about the points they raised. First, they noted the highly fragmented emergency response system here – each city or county has its own system, using its own software, and its own protocols. While he agreed, Mr. Price noted that PulsePoint now has experience and the necessary APIs to integrate with the major US software vendors. Another concern raised in the editorial was the risk of getting sued in our more litigious society. Mr. Price points out that protections in the setting of cardiac arrest, a scenario where death has basically occurred and the chances of harm are slim, are much stronger than the general good samaritan laws and that no one has ever successfully been sued for providing bystander CPR.

Overall, it’s a really interesting and exciting platform with a great deal of potential, both domestically and abroad. In fact, we recently highlighted CriticaLink, a platform launched in Dhaka, Bangladesh that provides even broader crowd-sourced emergency response where such resources are sparse. It would be fascinating to see pre/post data on the effect on bystander CPR rates and even outcomes. There’s also an opportunity here to study the platform in a sort of natural experiment – if they have resources to launch in 5 cities but 10 choices, randomly pick and compare outcomes between intervention/control cities1.

PulsePoint has plans to deploy in many more cities both in the US and internationally in the coming months.