Psychiatric apps aren’t quite where they could be as compared to their primary care and fitness counterpart apps. Though much of the digital health space has focused on creating attractive tools for maintaining fitness, there hasn’t been much in the way of usable tools for mental health.

In fact, a quick glance at the Google Play Store shows that many of the depression apps could use an interface makeover. 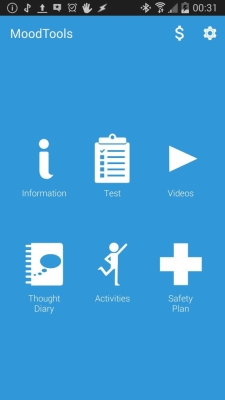 Enter MoodTools. This no-frills free app — with optional paid premium features — provides a sizeable amount of psychoeducation on different types of depression, various treatments for depression, and what to do in situations such as suicide safety.

And no-frills makes the app seem like a no-brainer. Although the interface, at first glance, seems plain, I quickly grew to appreciate how responsive the user interface was. There were no mystery-meat icons, no unconventional interface quirks, no surprise pixel-hunting. There were a few odd dialog boxes and grammar issues here and there, such as this one that confusingly asks people two diametric questions in which the choices are “yes” or “no.” What exactly does it mean to “continue”? Continue the entry, or continue throwing the entry away? And what does having a “5” for “Distress” mean? 5%? 5 out of 10? Distress isn’t even a standard numeric scale in psychiatry, so you can bet that both doctor and user will be baffled. But, I am nitpicking. These issues don’t occur much in the interface. 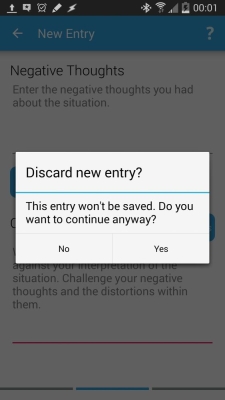 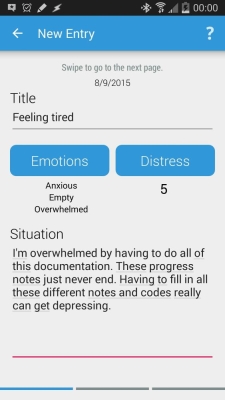 The app is unfortunately saddled with heavy amounts of text. There are few multimedia features, aside from links to YouTube videos and TED talks. It does make some elements of depression treatment — such as cognitive behavioral therapy (CBT) thought records and depression symptom tracking — more interactive. In fact, as you can see, I had so much fun targeting my own negative thoughts of having to do computer documentation and progress notes. Suicide safety plans are also nicely done, though with one caveat. 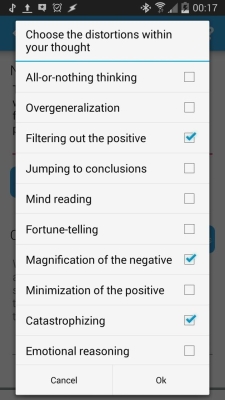 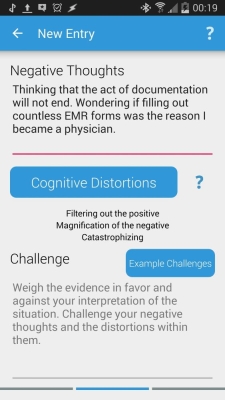 Symptom tracking is not very robust. The app uses a PHQ-9 questionnaire, presents scores in neatly-printed rows, and that’s it. The most dangerous part is that it doesn’t quite handle suicidality very effectively. When that issue does come up, all the app does is provide a link to a Helpguide.org page on suicide which — while nicely designed — is an organization I hadn’t heard of until now. It would have been nice if the symptom tracker used parts of the user’s existing safety plan, along with immediate phone numbers to suicide safety hotlines. Cognition can be impaired in the severely depressed patient, so the last thing that I would want to give someone who was actively suicidal is page after page of text to read. I’d want to get someone talking with them stat. 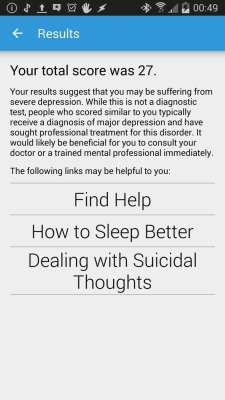 This brings me to the next point. For a smartphone app, it doesn’t do much to take advantage of smartphone features. No alarm settings. Not many graphical or communication features asides from web links and plain old telephone numbers. The activities that it suggests below, as you can see in the screenshot, don’t do much else to help or coach the user. And, of course, the app employs almost no graphics.

The no-frills interface may actually discourage people from using this app, as it doesn’t exactly provide a more welcoming aura. Overall, the interface does take on more of an academic aura, more than it needs to be for an app that targets consumers. 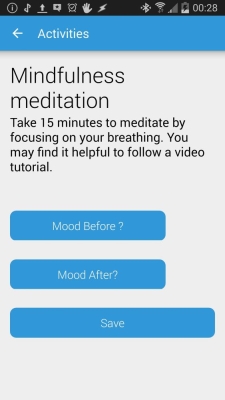 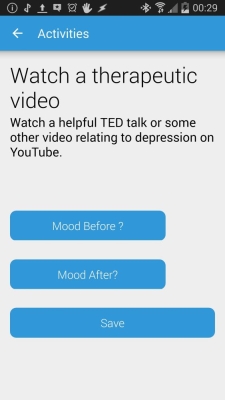 But this is one of the better, cleaner apps I’ve seen out there. Much could be done to improve this. Perhaps the app developer could boost the app’s credibility by partnering with known, respected institutions such as UC Health or the American Psychiatric Association. It’s a little unusual as the app itself has no mention about the app’s authors, but it seems to be authored by two Duke University undergraduates and a psychology professor.

As more and more medical students choose to pursue psychiatry residency in 2015, and are more tech-savvy than ever before, an app like Moodtools will have a place in the outpatient psychiatrist’s and mental health clinician’s arsenal of tools.
For more information, go to Moodtools