A study published this week has found that the vast majority of currently available apps for bipolar disorder fail to follow accepted clinical guidelines for education & management. Some even include patently wrong and potentially dangerous information.

Mental health conditions have attracted a lot of interest as areas where digital health technology could make a big impact. Australian researchers took a close look at the apps currently available in the marketplace for bipolar disorder. In total, they looked at 82 applications that were related to biploar disorder and intended for patients.

The derivation of the evaluation criteria was particularly interesting. Information about bipolar disorder was assessed against criteria derived from 11 core topics recommended for discussion in face-to-face interventions. They used best practice guidelines and meta-analyses of therapies to create 13 criteria to assess conformity to evidence-based practices. Finally, they developed criteria for specific functionalities including screening, symptom tracking, and treatment.

Among the 82 apps included, 59 were Android-only apps and 23 iOS-only apps. Ten apps were on both platforms. In terms of functionality, about 30 were informational apps while the rest provided management tools like symptom trackers.

Among informational apps, they found that these apps covered an average of 4 of their 11 educational criteria and 2 of their 13 best practice criteria. They also point out that there were many apps with essentially identical content and that 2/3 of apps failed to reference information sources. 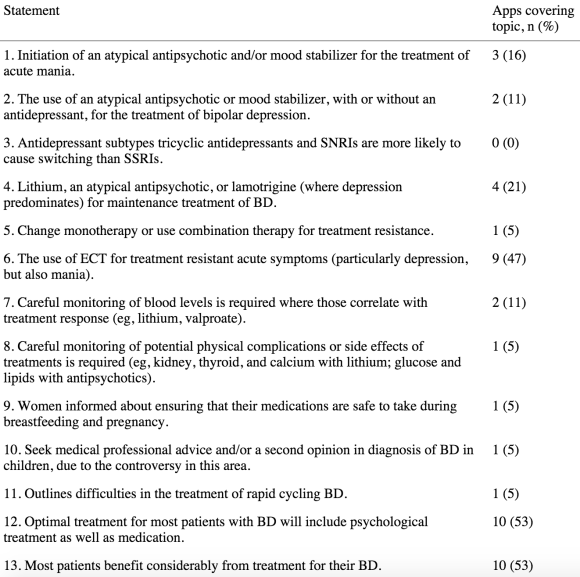 Management apps didn’t do any better. Among the thirty five symptom trackers, 22 apps had a reminder function & 15 had a reminder function that worked reliably. More concerning was how the apps responded when someone recorded being severely depressed for days or even that they were suicidal – none of the symptom monitoring apps generated alerts for persistent severely depressed mood and suicidal ideation.

They also found some pretty concerning recommendations in some apps that could be harmful:

Two contained critically wrong information; the first suggested, “take a shot of hard liquor a [sic] hour before bed” (app ID 404) to assist with sleep during a manic episode. The second incorrectly informed users about the types of BD and indicated that BD was contagious “sometimes [BD] can transfer to another relative if they spend too much time with you and listen to your depressive life” (app ID 28).

While these apps have a lot of potential, they also have potential for harm whether through inaction & wasted time or even direct harm through dangerous recommendations to a vulnerable individual. Clinicians caring for patients with bipolar disorder should tread carefully with the use of self-management apps, at least until we see more carefully vetted and tested apps come to market.