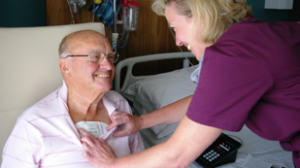 The United Kingdom’s National Health Service (NHS) is funding a pilot testing the use of a vital sign monitoring, wearable patch in hospitalized patients to detect & intervene faster on signs of clinical deterioration.

The device being used in this pilot is the SensiumVitals wearable patch. The device is a low-power patch sensor that goes on the chest and includes ECG electrodes and what appears to be an axillary temperature probe. The device can measure heart rate, respiratory rate, and body temperature. That information is then sent via a bridge to the SensiumVitals system where alert thresholds can be set. So if you set a threshold for a temperature of 38.0 C and your patient hits 38.2 C, then an alert is sent to nurse via a page or through secure text messaging solutions. This information can also be fed into the hospital’s EMR.

In this pilot at St. James University Hospital in Leeds, the SensiumVitals wearable patch will send vital sign information to the hospital IT systems every 2 minutes. The initial pilot will include 100 post-surgical patients. The pilot is being funded by the research arm of the National Health Service. Outcomes from this pilot will help inform plans for a larger, multicenter trial using the platform in several NHS hospitals.

There are important limitations to this platform, and this type of technology in general, that were highlighted in a feasibility study published earlier this year. That study involved 61 patients recruited in 2009 – 2010; oddly the paper was only published this year, nearly five years later, which raises some questions about the study itself.

In that study, one important limitation was patients’ atrial fibrillation – the ability to accurately monitor heart rate fell apart for those patients. That’s because the heart rate is measured by capturing a 30-second single-lead ECG every two minutes and calculating the heart rate based on the R-R interval. In atrial fibrillation, that doesn’t quite work due to significant R-R variability. That said, for patients in normal sinus rhythm, the accuracy was quite good.

A lot of telemetry systems currently in use are pretty burdensome for patients. Hardwired systems tether them to their bedside monitor and wireless monitors worn around the neck aren’t exactly comfortable. Emerging platforms like these that take into account the experience of the person actually using them – the patient – are important and useful for several reasons.

Impacting things like death, in-hospital complications, and others will take a lot more than just a patch sensor. We need to understand what signals matter and how to act on them. Studies like these (and hopefully larger ones to follow) will help us understand how we can design & use them to actually impact outcomes.