Review of Tensio from Humetrix, an app for people with high blood pressure

Review of Tensio for iPhone

There are nearly 70 million Americans with high blood pressure and anywhere from a third to a half of them don’t have their blood pressure under control.

Tensio is an app designed to help people manage high blood pressure. It’s designed by Humetrix, whose iBlueButton apps have been a consistent iMedicalApps favorite.

The app works with HealthKit and, on first use, gets your permission to get data including demographic information, blood pressure, weight, step count, sodium intake, and potassium intake. It’s also designed to work with the iBlueButton app, which automatically pulls health information for patients with certain types of insurance (like Medicare or those in the VA system).

The app opens to the main screen with the most recent heart rate & blood pressure at the top followed by several alerts in the form of tabs. 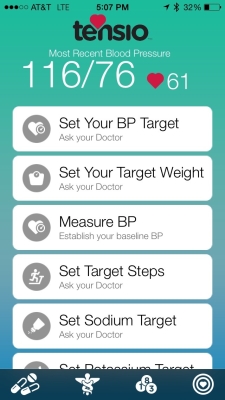 The first time you use the app, you’ll be asked to enter targets for things like blood pressure, sodium intake, and step counts. When doing that, Tensio reminds you to set these targets in conjunction with your doctor. I particularly appreciated that not just because it ensures people have the appropriate targets but, more importantly, it encourages that discussion with their doctor. 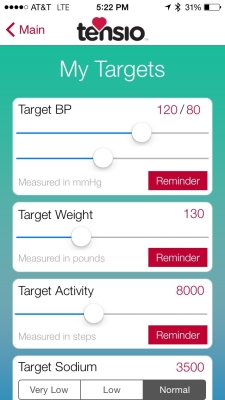 You can also set up reminders for everything you’re tracking, such as checking your blood pressure every morning or weight every few days. That didn’t quite make as much sense to me for things like sodium intake (what exactly are you reminding yourself to do?). You can also set up medication reminders when you’re entering your medications (see below); you can’t however track that you took them. 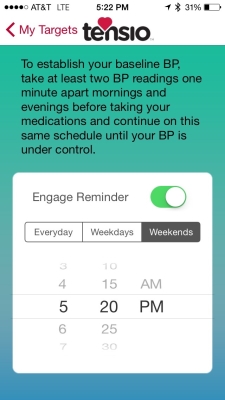 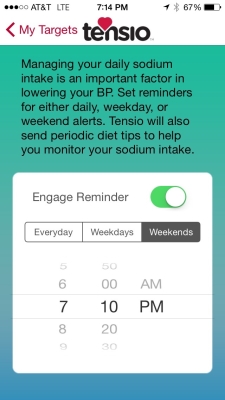 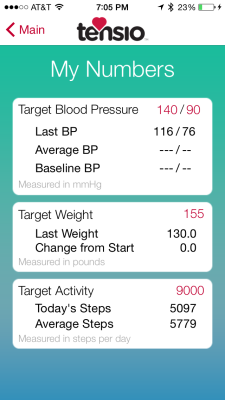 One glaring deficit we noted in the app is that you can’t manually enter blood pressure, so you’re out of luck unless you have an iPhone compatible blood pressure monitor. Given those monitors already have apps (and generally pretty good ones), I hoped Tensio would target people without those devices which it obviously doesn’t.

The app also includes tips, in the form of alerts, on managing hypertension. For example, it reminds patients to use an FDA approved and clinically validated wireless BP monitor and gives advice on how to properly measure blood pressure. I did note there that it includes Qardio as an option – however, as we previously pointed out, Qardio currently hasn’t published their independent third party validation. 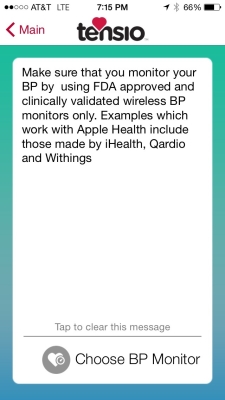 Other tips cover areas like low sodium foods, guidance on getting more aerobic exercise, and feedback on how you’re doing relative to your targets such as falling behind on your step count. Unfortunately, there aren’t any references for where these tips are coming from. Ed. Note: According to Humetrix, recommendations were pulled from European and American practice guidelines by physicians on their team. 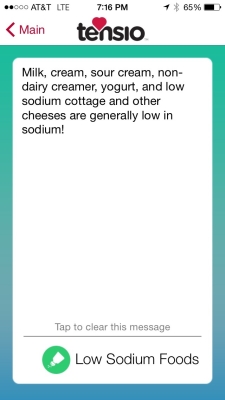 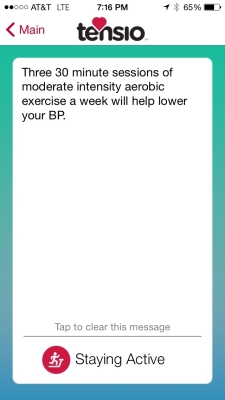 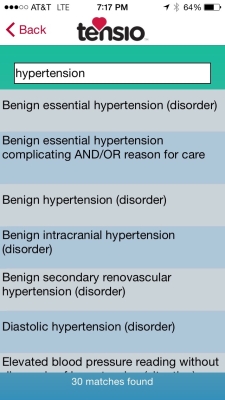 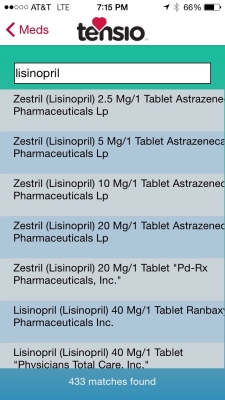 One feature I couldn’t test out is integration with iBlueButton from which Tensio can apparently import information on health conditions and medications (according to the FAQ). We discussed this feature with Dr. Chris Burrow, executive vice president at Humetrix and nephrologist. According to Dr. Burrow, a big focus of the app design was integration with iBlueButton. iBlueButton automatically pulls health data from Medicare, the VA, insurance plans, other Blue Button enabled portals, and health records sent by doctors or hospitals. That includes health conditions, medications, and more. Using App Groups, Tensio can pull information relevant to high blood pressure from iBlueButton. It then flags things that could affect your blood pressure, like a new diagnosis of thyroid disease or starting a prostate medication.

Finally, the app works with Apple Watch so alerts, like reminders to be more active or to check your blood pressure, can be viewed without having to pull out your phone. 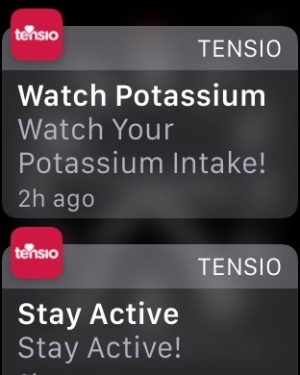 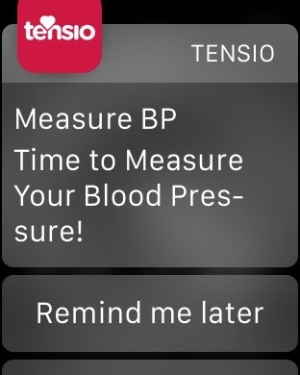 This review was updated after publication to correct an erroneous statement that there was no privacy policy. I also added some information on the iBlueButton integration which I couldn’t test myself after talking to Dr. Burrow.

Review of Tensio from Humetrix, an app for people with high blood pressure