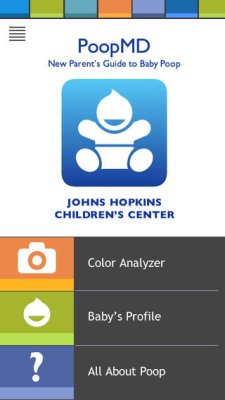 Biliary atresia is a serious disease that affects infants and is the leading cause of pediatric liver failure in the United States. Catching it early can facilitate interventions before this life-threatening complication has developed. And, believe it or not, there is an app for that. Now there’s also data saying it works.

The PoopMD app was developed by Dr. Douglas Mogul, a pediatric gastroenterologist at the Johns Hopkins Children’s Center. Basically, parents can take a picture of their child’s stool. The app then analyzes it, determines the color, and tells parents what that color means. We reviewed PoopMD a few months ago and were impressed with its design and the idea overall.

We did point out the description in the app stores that said the app would “analyze the color to determine if you should discuss it further with your pediatrician” and similar descriptions in the app suggesting parents use it any time they are concerned about abnormal stool. In our admittedly simple tests, the app didn’t seem to do very well with bloody stools in particular. And at the time, we couldn’t find any data supporting the app’s accuracy.

This week, that changed and the app’s developers published a study evaluating the accuracy of PoopMD in identifying acholic stools. They started with a set of 34 normal stool images and 7 acholic stool images. When analyzing these images, PoopMD delivered an impressive performance identifying all acholic stools correctly and misidentifying 3 normal stools as indeterminate (100% sensitivity, 89% specificity). They also tested the app under varying light conditions and using both an iPhone and Samsung Galaxy S4, finding good agreement (k above 0.8). When performed by three non-healthcare participants, the agreement wasn’t quite as good but still fair (k = 0.68).

Of note, they intentionally didn’t include images of other types of abnormal stool like bloody stools. The rationale was that (1) the primary goal of the app is to screen for acholic stools and (2) parents would recognize red or black stools as concerning and presumably then wouldn’t use this app or would ignore its findings if discrepant with their own assessment.

For the latter point, while that’s generally probably true, we’ve seen plenty of examples of people using apps well beyond their intended scope. It would probably be prudent to be more direct on the intended use of the stool analyzer both on the app description and in the app. For example, the stool analyzer could be clearly identified as a screening tool for a liver disease rather than an all-encompassing stool evaluation tool.

According to the paper, there are plans for a new version of PoopMD that will facilitate further studies of app usage and real-world accuracy studies.

Overall, PoopMD and its stool-analyzer functionality is a great example of the opportunities that mobile technology offers and the innovative ways that these tools can be used to address real needs. The educational material in the app is also important, practical, and reliable; that makes this app a solid resource for parents independent of the stool analyzer as well. It’s important that parents using this app, in particular the stool-analyzer, understand the intended use of the app. Through that intended use, screening for biliary atresia becomes a highly scalable, low cost endeavor that could make a big impact.