3 interesting health apps in the pipeline

Usually I’m skeptical of health apps that promise a lot but haven’t been released — but a recent article by Scientific America was interesting because of the academic backing of the apps mentioned. The three health apps in the pipeline are backed by or use technology from University researchers and are undergoing clinical trials — something a majority of the health apps never get.

ApneaApp: The most exciting app mentioned, ApneaApp diagnoses sleep apnea — but not in the traditional way. It actually turns your phone into an active sonar — without requiring any additional hardware. In initial testing, ApneaApp captured sleep apnea events as accurately as a hospital polysomnography test 98 percent of the time. The researchers for this app are from the University of Washington.  They have a great Youtube video demonstrating the app in action.

Currently they have plans to do clinical trials at patients’ homes. If they are able to pull off similar results using their sonar algorithm, this app could be a huge boom. Sleep Apnea testing requires patients to be hooked up to lots of wires and requires overnight stays at hospitals or clinics — not easy to do and also expensive. Having an app that does this on a smartphone would be a game changer. 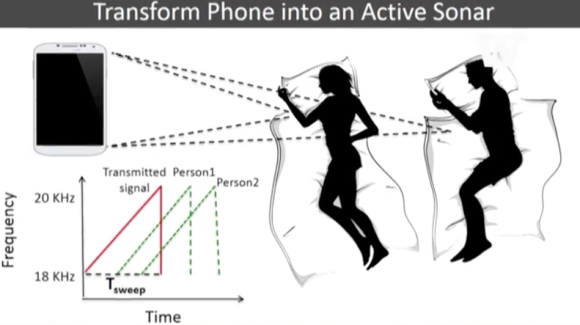 PRIORI: Listens to a patient’s voice during phone calls to determine onset of depressive or manic episodes, and gives alerts to providers when intervention might be required. University of Michigan researchers have funding for clinical trials that are currently underway.

ResApp: Listens to the sound of your cough to determine the type and severity of the respiratory illness. Developed via algorithms by University of Queensland researchers. The researchers were funded by the Bill and Melinda Gates Foundation. I wrote about the research 5 years ago, and it’s nice to see the app finally getting testing.  I’m skeptical if this app will ever see final meaningful use due to how long it took from the research to testing phase.