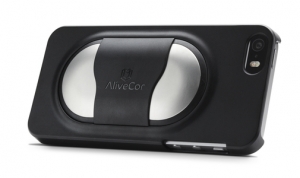 A few months ago, we described a small case series in which a modified AliveCor Heart Monitor was used to generate a 12-lead EKG on patients in the emergency department with EKG evidence of an ST-elevation myocardial infarction. Investigators at the Intermountain Health System in Utah are now getting ready to launch a larger clinical trial testing this device in patients presenting to the emergency department with chest pain.

In the case series, investigators used a modified AliveCor Heart Monitor that basically enabled sequential capture one lead at a time. The three limb leads are captured plus the six precordial leads (using either the right or left leg as the grounding lead). The augmented limb leads are derived from the limb leads. In that study, the agreement between the conventional ECG and the AliveCor generated EKG was quite good, though we did raise some questions about the methodology and potential bias.

The device used in this study does sound like it will be an upgrade from the prior study including a wider signal diagnostic bandwidth (more in line with a 12-lead ECG), improved software, and new components to connect the ECG leads to the smartphone.

As I noted in my article on the initial case series, there are some interesting potential advantages here. The AliveCor “12 lead” device will probably be a lot cheaper than a 12-lead ECG machine. It’s also a lot smaller and more portable. And it has built in connectivity to enable rapid ECG transfer wherever it needs to go. Those features could make it particularly useful in remote or resource-limited settings.

On the other hand, the AliveCor “12-lead” seems to take longer to capture. In the case series, each of the 9 directly captured leads is measured one after the other for 15 seconds. That’s over 2 minutes of actual measuring team plus the time it takes to switch the leads each time and wait for the signal to stabilize. Hopefully, this pilot study will include a measure of time to capture the 12-lead as well.

Overall, it’s a really interesting idea that’s definitely worth testing as is being done here. And as with prior AliveCor studies, it’s also a great example of how digital health companies can work with clinicians to evaluate & improve their products.