Last year I had a teenager come to the ER concerned about a cyst they had on their wrist. The cyst was painful at times, and over the weekend had increased in size. The patient’s mother had just noticed the cyst and was very concerned.

The teenager looked at me, with their iPhone in hand, and said the following — “I don’t know why my mom is freaking out, I searched for it on Google, and it’s a ganglion cyst. I read up on it using Wikipedia and I’m not concerned, but my mom was worried so that started to get me worried.”

I looked at the teenager’s wrist, and he had a ganglion cyst on the volar aspect of his wrist. Nothing to do in the emergent setting as family wanted to discuss possible surgical interventions versus observation with their pediatrician.

This situation is one facing many physicians, and supported by the following report released this week “Teens, Health and Technology” by researchers at Northwestern University that looked at how adolescents ages 13 to 18 utilize technology to learn about health. The survey was nationally representative and conducted from October 21 to November 9, 2014. The report also stretched across various socioeconomic blocks.

One of the most surprising things to me was table 5 of the survey results: 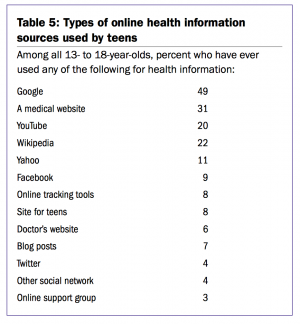 Notice the lack of traditional social networking sites. When I looked at the questions asked in the survey, social network groups were defined as the following: Facebook, Tumblr, Instagram, Reddit. On the flip side, notice the clout of Google — almost 50 percent.  Youtube was at a surprising high 20 percent (Youtube is owned by Google).

What surprised me even more was the following: Nearly nine in ten teens (88 percent) said if they had a health question or were looking for advice on a health topic, they would not post on a social networking site such as Twitter or Facebook.  There is a common perception that teenagers don’t care about health privacy since they share pictures, videos, and personal information so easily — but this clearly isn’t the case.

Instead of focusing so heavily on social networking sites — health organization that target adolescents should consider focusing on Google and Youtube. Google rankings matter a great deal as half of the adolescents who search on Google pick the first site in the search result and less than half look at the other sites. A health organization could consider utilizing Google advertising or work on optimizing their overall Google rankings.

Unfortunately, improving search engine optimization with Google is extremely complex and fraught with issues, but creating a Youtube channel that provides trusted medical content is much easier to do. Youtube is where health organizations should look for a cost effective and quicker bump in reaching adolescents.

For health organizations that aim content at adolescents this survey should give great pause at their overall online strategies.