Over the past several years, we’ve worked hard to try to help our colleagues discover the apps and devices that can improve the care they deliver. And there are a lot of great tools out there. 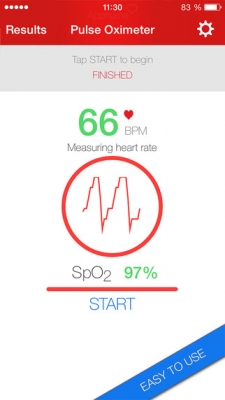 But in this largely unregulated space, there are also apps that are making unjustifiable claims and exposing patients to unnecessary risk. More than five years ago, we reported on apps that claimed to treat acne with a phone light. Nearly a year later, the FCC took action against these developers. In 2011, we highlighted apps that claim to diagnose skin cancer; these apps were subject to FCC action earlier this year. And we more recently reported on an app that measures blood pressure with just the phone – a claim we found to be totally indefensible.

We recently came across another app of which clinicians should be aware – Pulse Oximeter. This app from DigiDoc claims to measure your oxygen levels using just the light and camera of your smartphone. From its iTunes description,

The ONLY app to measure both the heart rate AND blood oxygen saturation – you DON’T need an external device. Integrated with Apple’s HealthKit. NOT FOR CLINICAL USE. Pulse Oximeter uses your iPhone’s camera to detect your pulse and oxygen levels from your fingertip. Track and record heartbeat and blood oxygen levels. Instant results, easy to use, simple charts to save your progress.

Whether you are training, doing simple exercise, or just monitoring stress levels, download the App today and use your camera’s flash to monitor your health!

It goes on to tell users that they can “Check your health anywhere, anytime! Your health is in your hand!”

Pulse oximeters typically use an infrared light source on one side and a sensor on the other to detect an oxygen saturation; a smartphone just uses white light (i.e. in the visible spectrum). According to DigiDoc, the app uses “reflective pulse oximetry,” which allows the light source and sensor (the camera in this case) to be next to each other.

And according to the white paper, the app measures oxygen saturation “within 90–100% (version 2.0.4) with an accuracy of 0–4 RSM compared to a medical grade pulse oximeter.” There is however no publicly available or published data supporting even that claim.

To be fair, the app does include the usual disclaimer:

NOTES: This app is for entertainment purpose only. The measure result can only be used for your reference. Consult a doctor if you have any health concerns.

Its white paper says early on that the app is “meant to be a useful tool for spot checks in recreational settings.” That’s important because it helps the app avoid FDA oversight – oximeters intended for recreation use or general wellness fall under “enforcement discretion” according to FDA documents (1,2)

That said, a quick scan of the reviews tells us that isn’t how people are using the app (the first one is highlighted on the DigiDoc website): 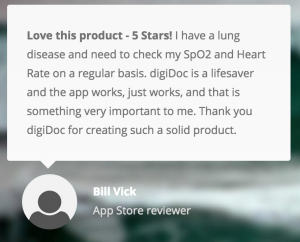 I contacted the developer of the app and heard back from Dr. Damoun Nassehi, a physician in the Netherlands and co-founder of DigiDoc. He was quick to point out that the app is not for clinical use, pointing out that he doesn’t use it in practice. According to Dr. Nassehi, “under good measuring conditions, the app is actually comparable to cheaper pulse oximeters.” DigiDoc has apparently not filed for 510(k) clearance “due to challenges in the form of false positives,” which I assume to mean general accuracy issues when dealing with abnormal values.

To his credit, Dr. Nassehi was forthright about the accuracy issues and added the statement regarding accuracy range to the app store description after we raised that concern.

That said, I do have big concerns about this app. First, it’s unsettling that people are spending money on an app that’s inaccurate when dealing with abnormal values. Second, while the app claims to be just for “entertainment” or “general wellness,” the user comments tell us that’s not how it’s being used. And I can’t blame them – the app store description delivers a mixed message. In some areas, the app is “not for clinical use” but in others it’s a phenomenal tool for “monitoring your health.”

Dr. Nassehi tells me that they are adding features to deal with the problem of inappropriate use of the app, like in app messaging. He also says that the decision to make this a paid app was (1) to fund further development work and (2) to incentive users to read the descriptions/disclaimers.

In my opinion, medical apps have a different bar to meet than others. There are real and consequential risks with inaccurate and poorly functioning medical apps. I’d worry about a patient with heart failure or COPD being falsely reassured by a “false positive” here – these are diseases where missing early signs of decompensation can make things a lot worse.

I completely support trying out new ideas and, when the risks are low, engaging the broader community in that effort. With the Pulse Oximetry app, if the aim was to do that, then I’d expect it to be a free app with a voluntary contribution. I’d also accept a statement in the app store saying this app is not accurate and not FDA cleared but that buying it will support further development.

As it stands, Pulse Oximeter makes clear claims about accuracy, utility, and charges for it. And our patients are using it for medical purposes.

I’d urge DigiDoc to either take the app off market until they can support their claims or at least make significant changes to their app store description. In the meantime, clinicians need to know that Pulse Oximeter is really popular and that they should advise their patients not to use it.