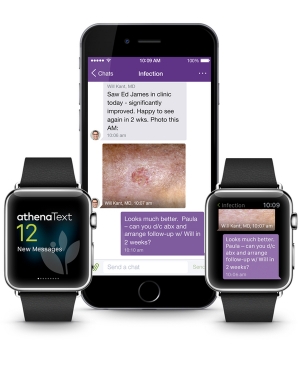 Athena Health, which counts among its holdings the popular Epocrates app, announced the launch of athenaText for iPhone and Android smartphones. The app will provide physicians with yet another option for HIPAA compliant messaging. And it includes support for the Apple Watch.

The app lets you send secure, HIPAA compliant messages, including images, to colleagues who are registered. For physicians and healthcare providers, athenaText verifies your identity through a series of questions when signing up. That allows you to “claim” your profile in their physician directory, similar to what Doximity does. 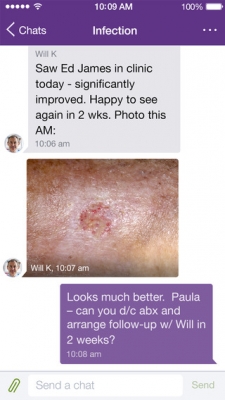 Contacts can be added by searching their physician directory. Right now, most of the colleagues I searched would need to be “invited” to athenaText (and presumably verified) before they can be messaged.

One key difference between athenaText and Doximity is that the former includes non-physicians. athenaText lets you invite others to join by email, phone number, and from your contact list entry.

So you could include social workers, case managers, and other members of the care team. That could make this platform more practical for, say, a small to medium size outpatient practice where you want to simplify communication among a multidisciplinary care team. In that way, it’s more like TigerText. 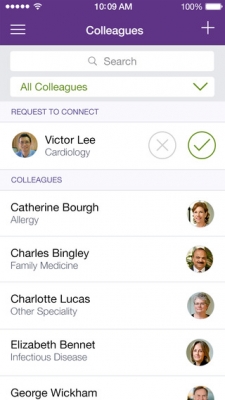 There are also a couple of particularly interesting features worth noting. First, it’s linked to Epocrates. So if I suggest starting atorvastatin in a message, tapping on the drug name in the message will automatically pull up the entry in Epocrates. You can also form groups within the app, another feature that could make the app useful for small to medium size clinics. It could also be useful if you have a group of colleagues that tend to curbside each other.

The app will include Apple Watch support, delivering notifications and message previews. It doesn’t appear to include the ability to dictate responses. 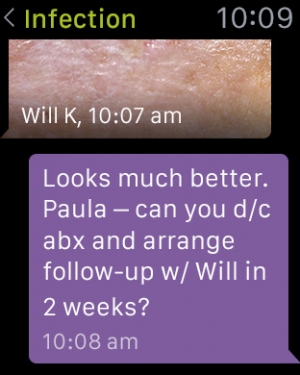 Right now, the app almost certainly doesn’t have enough users on board to make it useful if you’re trying to reach a colleague. And its user interface isn’t quite as friendly as TigerText. That said, the integration with Epocrates is an interesting, unique feature and this is an early version. Depending on where Athena and Epocrates take it from here, athenaText certainly has potential to become a really useful tool for improving communication in healthcare.