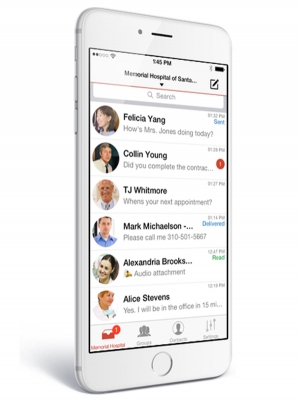 TigerText announced this week that its bringing its HIPAA compliant messaging platform to the Apple Watch.

TigerText is a secure enterprise text messaging platform that meets HIPAA requirements for electronic communication. In his review of TigerText, Dr. Eli Sprecher described how the app is used at Boston Children’s Hospital. The app can be used to communicate protected patient health information, send media such as pictures and video, or send group texts. And everyone on the care team can use it – physicians, nurses, social workers, case managers, patient advocates, and so on.

According to TigerText, the Apple Watch app will give users the ability to read as well as dictate messages. Specifically, the app will include:

With the increasingly multidisciplinary nature of the care team, improved communication is critical to effective care. That’s why HIPAA-compliant messaging was included in our wishlist of apps for the Apple Watch. Doximity recently announced that they would be launching an Apple Watch app that enables secure communication among physicians as well as delivering notifications when you get a fax on your secure Doximity e-fax line.

TigerText is already a popular tool at many healthcare institutions. And that is open to any team member, not just physicians, makes it a better fit for communication within a care team at a hospital or clinic.

Given the cost of the Apple Watch, it seems unlikely that we’ll see an enterprise level deployment within healthcare in the near future though I wouldn’t be surprised if we see a few pilots pop up here and there. As recognized by TigerText, its far more likely to start out much the same way as the iPhone and iPad did – in a “bring your own device” model. And with physicians’ enthusiastic uptake of iOS devices, we’ll probably see a fair number of Apple Watches in the clinic and on the wards.