Surgical robot hacked by computer science experts, not the imminent threat being implied in media 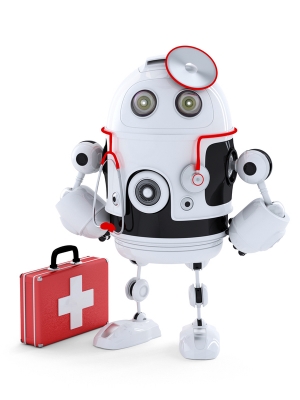 Researchers at the University of Washington in Seattle have demonstrated the ability to remotely hack a research surgical robot, the RAVEN II platform.

Before continuing, I’ll stop to clarify one thing. The RAVEN II is not a clinically used surgical robot like, say, the Da Vinci surgical robot. It’s an “open-source” surgical robot developed at the University of Washington to test and demonstrate advanced concepts in robotic surgery. We contacted Applied Dexterity which is now in charge of the RAVEN platform and according to co-founder David Drajeske,

The RAVEN II platform is not approved for use on humans. The system has been placed at 18 robotics research labs worldwide…that are using it to make advances in surgical robotics technologies…The low level software is open-source and it is designed to be “hackable” or readily reprogrammed.

Clinically used surgical robots, like the Da Vinci platform, operate on secure local networks using proprietary (i.e. not publicly available) communications protocols between the console and the robot. By contrast, RAVEN II can work on unsecured public networks and uses a publicly available communications protocol (see below). So while some have proclaimed an imminent threat to robotic surgery, that’s simply not the case.

That said, the work does have interesting implications; as pointed out by Mr. Drajeske and co-founder Blake Hannaford, RAVEN II is a great platform for testing these type of security issues. Tamara Bonaci, a graduate student at the University of Washigton, led this study to test the security vulnerabilities that could threaten surgeons using these tools and their patients. In this simulation, they aimed to recreate an environment that would be more akin to using these robots in remote areas.

They tested a series of attacks on the RAVEN II system while an operator used it to complete a simulated task – moving rubber blocks around.

One of the main use cases highlighted for surgical robots, or any number of medical robots for that matter, is that they can function in remote, difficult to reach, and underserved areas. In those areas, some of the conditions of this study are likely to be present – like having to use a relatively unsecured data network. And for cost reasons, using a more open-source platform may be important. So this study does however raise interesting questions about the use of medical robots – it just doesn’t mean that clinically used surgical robots are under some imminent threat.