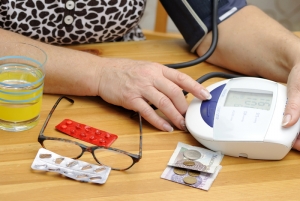 A recent retrospective study from the Center for Connected Health in Boston has suggested pretty impressive benefits associated with a remote monitoring program for heart failure patients.

While the benefits of remote monitoring in heart failure seem intuitive, their efficacy has been controversial. While a 2010 Cochrane meta-analysis suggested benefits, a sizable 2011 randomized trial (Tele-HF) failed to show benefit. The intervention itself is hard to study. Unlike say a drug, there are a lot of moving pieces and varied approaches to this intervention. Dr. Akshay Desai from Brigham and Women’s Hospital summarized the challenges nicely in a 2013 editorial.

In this retrospective case-controlled study, Agboola et al evaluated patients enrolled in a home monitoring program after a heart failure hospitalization. They matched these patients 1:1 with patients also hospitalized for heart failure in the same period; matching was on age, gender, and race. More on that later.

The home monitoring system captured vital signs including weights and symptom information with questionnaires. It also provided educational material. Nurses reviewed the data and provided biweekly education as well. If they noted concerning changes, such as increases in weight or heart failure symptoms, then they would contact the physician for intervention. In follow up of the 348 patients included (174 in each group), they found a reduction in hospitalizations up to 90 days and reduction in mortality up to 120 days (HR 0.63 and 0.33 respectively; p values < 0.05). Notably, they did also find that when the monitoring ended, the benefit disappeared. In other words, when the monitoring stopped, mortality and hospitalization risk for the monitored group became the same as the non-monitored group. That finding is particularly important. With the implementation of penalties for 30-day heart failure readmissions, there was an explosion of companies providing 30 days of monitoring. And while that may help the bottom line of hospitals, our patients would probably like to keep those benefits going for a lot longer than 30 days. There are certainly limits to the study worth noting. First, its subject to the usual biases of a retrospective study such as selection bias. For example, perhaps the patients enrolled in remote monitoring were more compliant by nature. In addition, the results do some limitations to generalizability - there may not be nearly as much benefit for patients who haven't been hospitalized recently. That said, the result is certainly plausible even if data from larger clinical trials is less clear. Given the challenges with studying these kinds of systems in the typical large, randomized trial with long follow up, this type of real world data is even more important in guiding practice.