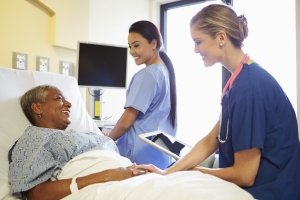 The challenge of integrating mobile medical technology – like medical apps – into the hospital environment was highlighted in a recent survey by the Gary and Mary West Health Institute. The national survey, “Missed Connections: A Nurses Survey on Interoperability and Improved Patient Care,” included 526 nurses (RN or higher, working in a non-school setting) and was conducted online by Harris Poll on behalf of the West Health Institute.

The key premise of the survey was that hospital efforts to use medical devices to lower medical errors may actually lead to medical errors when those devices are not “seamlessly connected.” In other words, the devices need to be able to easily share information in an accurate, timely manner. The frequency at which nurses re-enter the same data into each machine needs to be reduced. In addition, devices often don’t share their information with electronic medical records requiring nurses to record data manually and enter it into the medical record.

Key findings of the survey according to a press release and survey overview released by West Health are as follows:

Overall, managing devices and data entry is taking many nurses away from what they are there to do – take care of patients. However, the desire for seamless interaction between devices poses a great challenge given the various companies and software platforms associated with the various devices used in a hospital. In addition, coordinating these devices with electronic health records can add another layer to this challenge because various electronic health record systems may be used by one hospital or health system and the EHR’s may not be interoperable.

West Health indicates that open communication standards for devices is a first start towards more seamless connections between them. Indeed, industry standards on interoperability can help address the challenge nurses are facing. However, these standards often lack enforcement. There is likely a limited role for government to help coordinate the industry and set standards that are tied to incentives, such as grants to companies seeking to engage in the research and development needed to meet the standards.

The path forward is definitely not clear, and the problem of devices that do not communicate with each other in hospitals will continue to challenge the health care system for the foreseeable future.

This is an area ripe for innovation from medical app developers that could lead to benefits for patients and other healthcare stakeholders. In fact, West Health Institute estimates that a “system of connected devices could potentially save more than $30 billion each year by reducing redundant testing, manual data entry and transcription errors.” That’s a lofty goal worth working towards.