Evernote is getting harder to use for Android physicians

We’ve covered Evernote multiple times on iMedicalApps in the past. We’ve written on how it has empowered users to manage virtual, online libraries. And, for the harried student — whether dental, medical, pharmacy, psychology, and even pre-med — it can be a godsend.

I cannot tell you how many times someone has asked me for notes from a particular conference or recommendations for a particular journal paper. And, thanks to Evernote, I’ve been able to retrieve such notes quickly from their mobile Evernote app.

But that’s primarily because Evernote’s Mac app is quite good. Its Android app, on the other hand, is quite a different experience — and a mixed bag at that. Evernote recently re-designed their Android app, updating it to conform to Android 5.0 Loliipop’s Material Design user experience guidelines.

So, is the new Evernote for Android worth it? How does it stack up to its competitors? 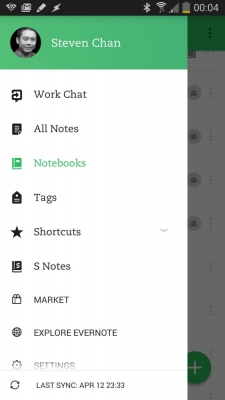 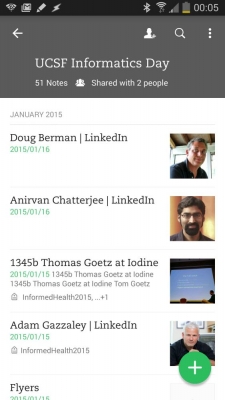 Anyone spending time with Evernote will notice that they really put a lot of thought in making their user experience feel pleasant. From graphics and cartoons providing first-time users tips, to its strict adherence to the native Android user interface, it feels like a robust application.

And, in a nice touch, Evernote now views all tags in a list within the Details panel for each note. This is perfect for those of us who take full advantage of Evernote notes’ ability to tag notes with multiple tags. Have a medical article that, for instance, covers bipolar disorders, belongs to the American Journal of Psychiatry, is something you want to review, and something to do for today? Tag it with all of those tags. 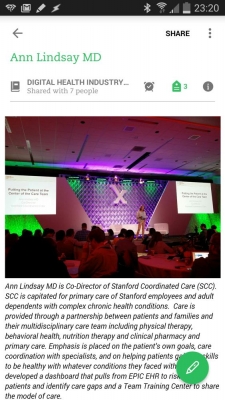 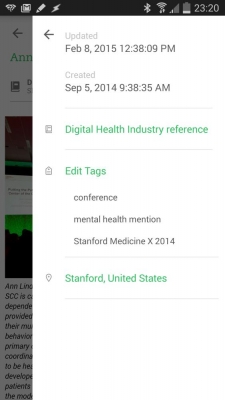 Evernote lets you save searches, combining tags very easily — although, if your phone is offline, Evernote’s saved search capabilities doesn’t work. You wouldn’t know it, because, while offline, Evernote reports no notes match the search query, while giving you different search results when online.

Evernote also includes its new Context feature, suggesting articles from external resources, your other notes, and other users’ shared notebooks. This allows you to find related articles easily and brainstorm new ideas.

This is great if you’re a healthcare entrepreneur or a hospital administrator, but will most likely be useless to most other medical practitioners. Give us integration with PubMed, UpToDate, AccessMedicine or — better yet, specialty-specific resources like PsychiatryOnline — and we’re there.

Despite the easy-to-use interface, there are some quirks that, unless you have the desktop Evernote application to rescue you, will lead you to seemingly irreversibly lose your data. 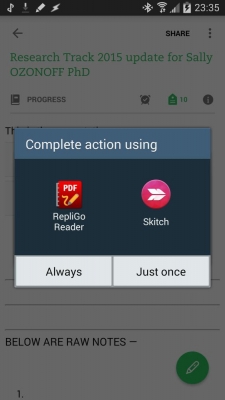 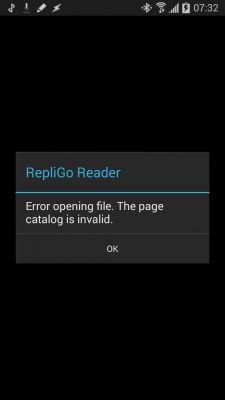 For instance, Evernote — for whatever reason — botches editing of note attachments. I often edit my PDF files in Repligo Reader, a robust PDF annotation and bookmarking app, since Evernote’s Skitch app has too few options. I cannot tell you how many times I’ve lost my annotations, despite saving it back to Evernote. One workaround is to not just save your Evernote attachment, but also save it in a temporary directory when — not if — Evernote loses your saved changes. And, at times, Evernote saves PDF files as 0-byte attachments (as seen in the screenshots above), but that’s more of an issue with Evernote’s web capture tool for Safari.

Evernote’s Android app also irreversibly modifies notes by simplifying formatting. For instance, here’s the note in its original form on the left — with checkboxes placed inline — and here’s the same note on the right, after I press the Edit button. I’m not sure why but Evernote even started checking off boxes for me: 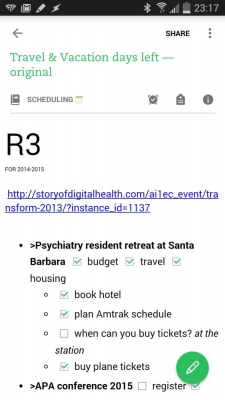 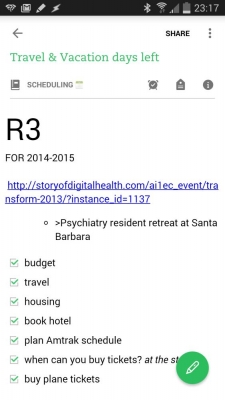 There was no warning whatsoever that Evernote was about to — to put it bluntly — butcher my outline. Evernote also does not even allow you to discard changes you — or Evernote — has made to a note.

And, worst of all, it is impossible to revert a note from Android’s interface. Evernote’s desktop interface allows you to restore a previously-saved version of a note. If you’re in the middle of a conference equipped with your Android tablet, and the Evernote app mistakenly chews up your note, you are out of luck. Restoring a note can only be done from the web or desktop interface. 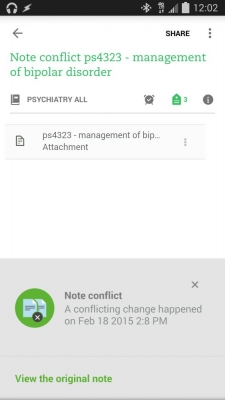 All of these issues, combined with Evernote’s random “note conflicts” that appear — such as the one updated at “2:8 PM [sic]” in the screenshot — can feel like Evernote is playing loose and fast with your data. No healthcare provider should entrust protected health information to this service. Evernote’s Android app does not even include the Mac and Windows app’s encryption options, which, we should note, should never be used to store PHI as Evernote does not implement the HIPAA Security Rule. 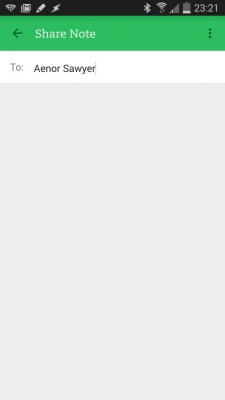 The worst offender so far has been their Work Chat interface. Since implementing it, Evernote has taken out quite a few options, from making it now impossible — from any of their interfaces — to display publicly-shared notebooks, to making sharing a convoluted experience. Want to share the link to a note? You can’t do it from within the note; you’ll have to long-press the note from the Notes view. Want to e-mail a copy of the note? Good luck trying to find it: they’ve buried it under the cryptically named option “Send a copy” menu item.

Profiles of users also do not properly show photos. I’ve uploaded my photo countless times, for instance, in both Evernote Web and Evernote for Android, and it still shows my profile picture as a large stylized “S.” There’s no integration with Gravatar.

In fact — as evidenced by the screenshot above — Evernote for Android does not seem to use the built-in address book at all, so you have to manually enter in people’s e-mail addresses. This makes it a chore to share notes with people.

Microsoft OneNote’s handwriting tools and multiple colors puts Evernote to shame; Samsung’s S Note also has, for years, allowed users to paste, stylize, and add a variety of graphics that Evernote does not support. Evernote only allows you to draw with black, red, blue, and green colors. And that’s it. 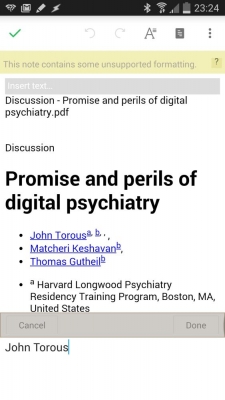 And, for years, other word processors — like nearly every word processor for Android and Pages for iOS — has offered more robust text editing. If you edit a note in Evernote for Mac and use anything beyond bold, italics, underline, and lists, be prepared for a world of pain while trying to edit the note here — as seen in this screenshot. And, even with simplified formatting, Evernote still won’t allow you to select more than one bullet point while editing.

Viewing the activity in a shared notebook is also impossible to do in Evernote for Android, as is selecting multiple items for editing. You can’t even move tags around. Other tools, such as Box and Google Drive, have these capabilities. Even basic, built-in file manager apps allow you to select multiple files. This makes it impossible to do anything as simple as re-tagging, moving, or deleting multiple notes. Why Evernote doesn’t include these basic tools is mind-boggling, and quickly becomes a frustrating experience.

Why Evernote has neutered the app from its Mac desktop counterpart is beyond me. Many users — from medical students to researchers — rely on solely mobile tools when they are on the wards or in conference. And they deserve better.

With all of these drawbacks, why use Evernote?

The key advantage, really, is Evernote’s ability to capture information effortlessly — from Post-Its to photographs to document-scanning and solid business card integration with LinkedIn. Its searching capabilities are solid: it’s one of the best I’ve seen and will serve many physicians and healthcare professionals well who invest the time to put their non-protected health information (PHI) work data in the system. Evernote’s Mac app is still a solid application that more reliably keeps one’s data intact.

And why use the Android app? It’s still the fastest way to bring up information on command. Their scanning tools, quick sketching, and business card-to-LinkedIn functions are a pleasure to use. And, their web page URL capture tool is one-of-a-kind.

But Evernote has some serious problems with data reliability and corruption. I thought it was just myself experiencing reliability issues, but they have been documented elsewhere.

Users can also consider some other tools. Microsoft, for instance, has made great strides in making their venerated OneNote desktop tool more available and workable on mobile interfaces. It has been widely discussed how Microsoft’s new strategy is “productivity and platforms,” creating software for non-Microsoft platforms as well. Box — with its Box Notes competition feature to Evernote — may actually suit physicians’ needs more, as Box supports HIPAA and PHI requirements, depending on whether this feature is set up in the business agreement. For instance, my home institution, UC Davis, offers Box, but UC Davis Health System does not have a licensing agreement for HIPAA protection.

In the end, we would still recommend continuing to use Evernote if you’re already invested in the platform. Knowing the quirks above will help you navigate and avoid instances in which Evernote would corrupt or misplace your data.

However, if you are new to Evernote, you may want to first investigate other apps, such as Google Drive, Box, and OneNote.

Evernote is getting harder to use for Android physicians