Clinical Sense App lets you play doctor on your phone

For many providers, medical applications are primarily about finding answers to clinical questions as rapidly as possible. However, a number of developers are exploring medical applications that resemble games. Games theory and gamification of medical education is still in its infancy, but more and more apps are being developed especially as the mobile technology platform continues to mature. The latest iPhone and Android devices are much more capable of high quality game play then even a generation or two ago.

One company, Medical Joyworks, has made a name for themselves via this gamification concept. Founded in 2010 and run primarily from Sri Lanka, Medical Joyworks claims that current “medical education is boring” and their goal is to “make medicine fun.” Their first and still most popular app, Prognosis: Your Diagnosis, was the first of several role playing apps centered on medical education. Although the app has become very popular, our review of the app felt it was fun, but lacked some substance for more advanced learners. Medical Joyworks has published a number of “sequels” to Prognosis since its debut, focusing on medical subspecialties such as cardiology. They have also released an app aimed squarely at patients with their popular My Prognosis: Pregnancy app.

Today we will review their latest release, Clinical Sense. This app is a role playing game in which the participant plays the role of a physician faced with challenging clinical scenarios. According to the Clinical Sense website, you can “live the life” of a surgeon, physician, oncologist, or psychiatrist. No other specialties are available at this time, though “physician” is essentially the “everyman” for this app.

The app opens with a Main Menu from which cases can be accessed. The first thing I noticed was the much improved and realistic artwork in this app. I viewed the app primarily on my iPad Air (2014) for this review and the graphics were much richer and less cartoon like then their prior efforts. At this time there are 24 cases available. I played 14 of them from start to finish and looked at all of them. 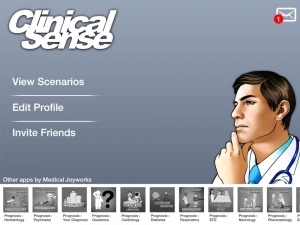 Regardless of your 3G or Wi-Fi connection, each case downloads very quickly (<5 seconds); I downloaded all of them in less than 5 minutes. Once downloaded, the cases do not require any 3G or Wi-Fi connection to be accessed. The age of the cases ranged from 2 days ago (Transplanted) to 1 year ago (numerous cases). It would seem that ongoing case development will be critical to keep Clinical Sense relevant to users after completing the initial 24 cases. Each case takes anywhere from 5-10 minutes to complete; this primarily depends upon how quickly you make your medical decisions at the key “decision points” built into each scenario and how thoroughly you read the supplemental information provided with each case. 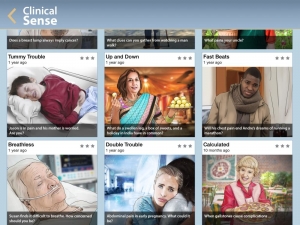 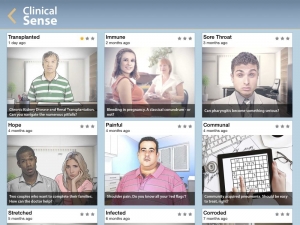 It isn’t completely clear which cases are geared for which specialty, but as a family physician, I could likely face any of them. Perhaps grouping them could help or at least offering the option of viewing by title vs. specialty.

For this review, let’s explore the “Sore Throat” scenario which is subtitled, “Can pharyngitis become something serious?” I suspect it can and will… The case opens with a graphic of a gurney in what looks to be an ER stating that you are seeing patients on New Year’s Eve. The stories in each scenario contain some “ripped from the headlines” text and attempts at humor. It works fairly well, but tends to be a bit dramatic. 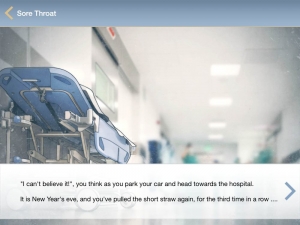 Our patient is a 32 year old male with sore throat, fever, malaise x 6 days. Minimal additional history is given; except that the patient is the “hospital Director’s golfing buddy” — the pressure is on! Some vitals are given (though not a complete list) and minimal physical exam data. The app doesn’t allow you to ask for additional history or physical data or to “perform” a virtual exam. It simply gives you what the author of the scenario wanted to give you. You are not able to “see” the patient’s throat for example. Adding heart sounds, respiratory findings, etc. would really make the app scenarios come to life. Instead they seem a bit too much like an old “Choose Your Own Adventure” story. 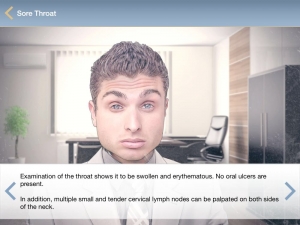 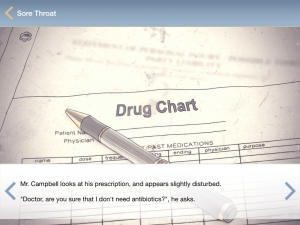 After several screens of text, you come to the first decision point of the case: a simple multiple choice type question, “What do you do now?” Again the app falls a little flat as the scenario already made some decisions for me (ordering a monspot and getting instantaneous results), and gives me only three choices. If you choose incorrectly, the app tends to hint strongly at this and forces you to do (initially) what the scenario creator wants you to do. I think having more branch points and consequences would be more realistic. 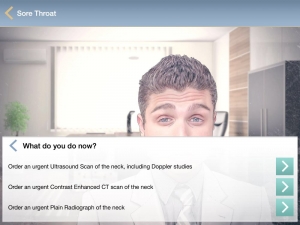 The scenarios bring up some fun and common “problems” such as the patient apparently wanting antibiotics when they are not indicated (per the negative rapid strep test). The app would be more fun and evidence-based if it allowed you to apply clinical decision rules such as Centor criteria or even engage in dialogue with the patient. For example, why doesn’t/couldn’t the patient actually speak to you?

We decided not to give our patient antibiotics and (not) surprisingly, the game has him returning to our office the next day much worse off. We are next asked to decide which imaging modality to order as the patient appears to have significant head and neck swelling. I decide to order a CT and the app shows an embedded link that opens up a short dialogue window discussing the radiographic features of Lemierre’s syndrome, a rare but potentially lethal complication of pharyngitis. The next screen discusses the workup and includes another embedded window on the etiology and work-up of Lemierre’s. The text appears to be well-referenced including the date of the literature search (22 January 2015 in this case). 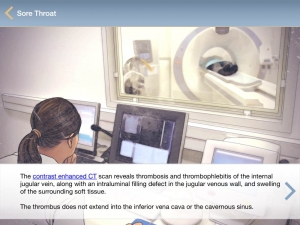 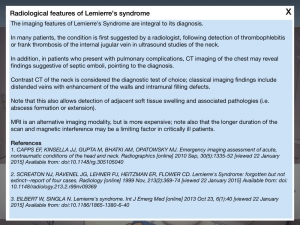 Despite making a correct diagnosis, the app continues to challenge, going deeper into in-hospital as well as post-hospital treatments such as how/if to treat the thrombosis in the jugular vein with heparin (you don’t) and even the proper treatment of a tension pneumothorax (need decompression). That complication seemed a bit out of place and potentially for additional drama. Here again, it would have been nice to have seen an actual chest X-ray to aid in the clinical decision and/or virtually perform the procedure. 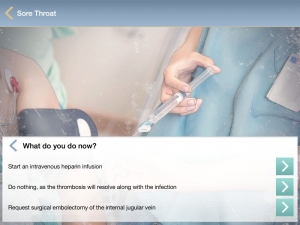 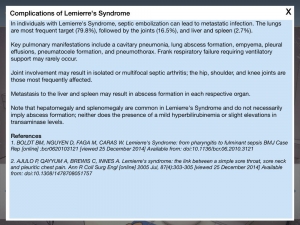 I will say that the depth of the disease process for Lemierre’s was pretty thorough since it included evaluation and discussion of metastatic complications of the disease. The app gives away some potentially good trivia by stating that the patient’s blood cultures grew out Fusobacterium necrophorum.

The scenario even has you interacting with the patient’s family, who wants to get him home to help with child care, and the Hospital Director who apparently wants his golfing buddy back. The case ends with a discussion of outpatient treatment. The app wants you to prescribe a prolonged course of oral ticarcillin/clavulanate (Timentin), however that is an IV antibiotic only. Likely a typo in the app, but it does make me question some of the other decision making and recommendations within the app. 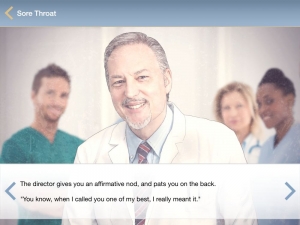 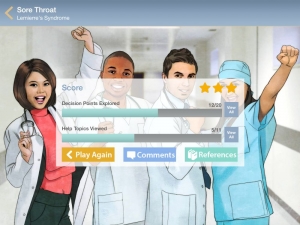 That all said, there is a growing debate of not utilizing antibiotics for strep pharyngitis for concern that antibiotics do more harm than good, and the overall complications are very rare, as is laid out in this clinical review.

How to use the app in clinical practice

The app is really more about challenging yourself with more rare clinical scenarios rather than using it for direct patient care. In this case, reviewing Lemierre’s syndrome was useful and may help me take better care of patients or consider a more unusual diagnosis on my differential. Most importantly, it tries to keep learning fun. Certainly, the app uses a much more active learning approach than a review article on a particular topic could ever be.

The app contains multiple decision points throughout each clinical scenario that are well referenced and appear accurate however, as we highlighted in the strep pharyngitis article, overall clinical decisions might not be researched enough. Further, I did find several possible errors during my use of the app. Links to PubMed abstracts and the dates of the literature search are included for each scenario.

Clinical Sense App lets you play doctor on your phone