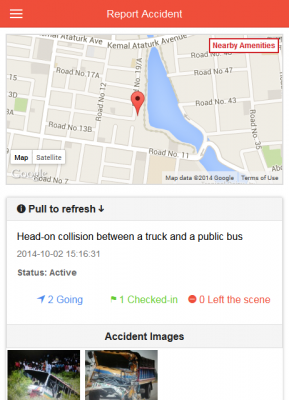 Imagine you’re walking down the congested streets of Dhaka, the capital of Bangladesh, and you hear a cry for help. You look further and you see a young woman screaming because her leg has been crushed in an accident between two motorized bikes that are commonly used for transporting people in Dhaka and she is bleeding profusely. What now?

In the developed world, you would probably call the local equivalent of 911 and she would most likely survive. Here, she probably won’t be so lucky. Why? Because of the lack of emergency services in this populous city. There is no 911 and very few people with emergency medical training, making the prospects of this woman surviving dismal. According to the World Health Organization, over 80% of Bangladeshis with trauma die before reaching a hospital.

Jennifer Farrell, an American medical student with prior EMT training and experience in the developing world, sought to change that.

While working in Bangladesh, she saw first-hand the need for improved emergency care and her response was the launch of CriticaLink in 2014. With help from a local call center company (MiakiVAS), CriticaLink developed an Android medical app that is “connecting people to save lives.” The free app has multiple functions, but the most important is connecting first responders to emergencies anywhere in Dhaka.

When an emergency occurs, a person can contact a call center provided to CriticaLink by MiakiVAS. They can also add a picture and other details using the app. The call center sends out information on the emergency to all users who are trained to provide emergency medical services along with a location using Google Maps. They also send out information on the nearest hospital, police department, and other relevant services that may help the responders. Those closest to the emergency will respond. When first responders arrive on the scene, they let CriticaLink know using the app. The app also has first aid tips for all users.

But, how can the app connect first responders when they do not exist? Because CriticaLink is much more than an app company. They are first and foremost a private, not for profit, emergency medical services trainer. Farrell and a diligent team of five Bangladeshi doctors provide rigorous, yet practical training to a cadre of young, optimistic Bangladeshis. The training takes a bare bones approach and teaches the trainees how to respond to emergencies with little or no equipment on the scene and how to use people around them as resources for some basic things they may need – like getting water or using a scarf for a tourniquet.

The young volunteers at CriticaLink include college students, a few medical students, and others from various walks of life. Once certified, CriticaLink gives the trained first responders a special level of access in the app that allows them to receive messages about emergencies in their area along with a related map. They are also given an ID badge, armband, and t-shirt to indicate their affiliation with the organization. As first responders build their experience, they receive ratings that can lead to recognition among their peers for the contributions they are making to saving the lives of their fellow citizens.

Farrell views the current effort as being in the pilot or beta stage. What Farrell is most proud of is that in a fairly short period of time, with little resources, a somewhat functional EMS system has been developed that can help people.  As Farrell states, you don’t need “the most sophisticated EMS in the world to have impact.” Also, CriticaLink has been successful in recruitment. The organization estimates that it has 500 first responders in its network, most of whom are young people – a good sign for the future. This group may over time have a domino effect as these individuals teach new cohorts of first responders.

CriticaLink faces a number of challenges, most of which are not surprising when it comes to work in the developing world. One of the challenges is generating the critical mass of awareness and first responders that will lead to consistent and long term utilization of CriticaLink. Another is figuring out how to pay for it. Currently, the organization depends on philanthropy; while government funding of this essential public service would make sense, it’s not something that can be relied on in a relatively impoverished country.

Farrell hopes to prove that CriticaLink can work well in Dhaka and bring the concept to other parts of Bangladesh as well as other nations with little EMS infrastructure. She wants this organization to be a reflection of the young people who are working to build a strong country not limited by tragedies of the past. The increasing interest that CriticaLink is receiving from young adults in Bangladesh is a testament to that idea.. The organization has three university chapters and likely more to come.

Because of the efforts of the CriticaLink team, Bangladesh has become a pioneer in mobile app emergency medical services and thereby better equipped to handle its emergencies. Citizens in other countries that lack emergency medical services should take notice and learn from this innovation. Hopefully, in the future, a young lady bleeding profusely from her leg will not be left alone to suffer but instead will receive the emergency help she needs.

Interested in learning more or helping out? Check out Farrell’s Tedx Talk, the CriticaLink website, their Facebook page, or their Indiegogo site. Farrell also invites readers with ideas or comments to email her directly at jennifer (at) criticalink.org.