Apps can be good for kids, pediatricians warming to mobile 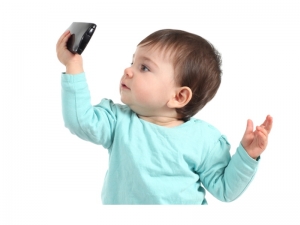 Guiding parents of small children regarding optimal mobile use is a challenging task for pediatricians.

In 1999 the American Academy of Pediatrics recommended discouraging all media exposure by children under 2 years of age, a policy most recently reaffirmed in 2011. The AAP’s guidance reflected studies showing little educational or developmental benefits for media use in children under 2 along with concerns that media use would distract or replace developmentally vital direct interactions between parents and young children.

However, as the media landscape radically changes and apps proliferate, pediatricians are in a challenging position regarding what to recommend to parents. The AAP guidelines do not mention tablets and only mention smartphones once, compared with 42 mentions of “television”. In October 2011, when the AAP guidance was republished, there were 500,000 iOS apps with only 140,000 native to the iPad; that’s compared with the more than 1.3 million available today with 675,000 native to iPad, many of which claim educational benefit. Smartphones have become ubiquitous among parents in clinic. What should providers recommend to families regarding smartphone and tablet apps?

Two recent viewpoint articles, by Dimitri Christakis in JAMA Pediatrics and Radesky, Schumacher, and Zuckerman in Pediatrics, attempt to fill in the gap in the AAP’s guidance by offering common-sense approaches to app use for parents. Christakis, the director of Seattle Children’s Center for Child Health, Behavior, and Development, argues that touch screen devices — unlike television — can offer similar developmental benefits as toys. Unlike passive watching of TV, apps can offer key benefits such as reactivity (reacting to what the child does), interactivity (prompting reactions from the child), and tailorability (the apps can behave differently depending on the age and developmental status of the child). The other key benefit of apps, which is also stressed by Radesky, Schumacker, and Zuckerman, is the ability for joint attention — that is, the parent and the child can share attention around the apps.

Christakis does counsel that toddlers should not spend more than 30 minutes to an hour on apps, which he admits is arbitrary but is based on the amount of time the average child under 2 is awake during the day and can maintain attention with standard toys. Christakis also warns against displacing activities — apps should not replace interactions parents have with children but should be in addition to those interactions.

Radesky et al., similarly warn against app use displacing “language and play-based interactions with caregivers,” which are crucial for toddler development. They do point out apps’ potential for promoting joint engagement between caregivers and children and to model teaching strategies, especially for low-literacy parents. They recommend that parents try the games or apps first then interact with the child throughout (through playing them with the child and asking about it after to see what the child has learned). There is also a role for clinicians in their guidance — they counsel providers to assess parents’ and children’s use of mobile technology in clinic and use it as a window into how parents interact with young children.  Radesky also recommends web resources such as PBS Kids, Sesame Workshop, or Common Sense Media to guide media choices and digital resources from sites like Resources for Early Learning or Zero to Three for ideas on developmentally appropriate activities.

Pediatricians often see their young patients playing with their parents’ smartphones or iPads in waiting or exam rooms. Without guidance from the AAP, it is difficult to know what to suggest. Christakis and Radesky et al., try to fill that gap by suggesting aspects of interactive games that can maximize their benefit for young children, although passively watching media on mobile devices is likely no better than watching TV. Providers can use patients’ media use in clinic as a “teachable moment,” as Radesky suggests, to counsel interactive gaming amid parent-child time as likely the most beneficial use for children under 2. But providers should also heed Christakis’s warning that more research is needed on the effect touch-screen devices have on toddler development before wholeheartedly recommending their use.