PreopEval14 is a great app for medically clearing patients for surgery

By Douglas Maurer DO, MPH, FAAFP

It is common practice in primary care to “clear” our patients for surgery. Not a week goes by, it seems, in my practice without a patient bringing in paperwork from a surgeon at our hospital or a local facility asking me to “ok” them for surgery, as well as perform various labs and diagnostic tests beforehand. The question for many is what needs to be done? It is all too tempting to do too much in order that a patient’s procedure won’t be cancelled because their primary care provider forgot to order “X” test. Furthermore, most primary care providers have had little formal education in performing preop evaluations. However, there are several evidence-based guidelines to help sort out the myriad of options.

Just deciding whether or not a patient is “safe” to proceed to the operating room is not enough. With today’s complicated medication regimens including various anticoagulation options, deciding what medications should be continued on the day of surgery or held (and for how long pre/post op) are very intimidating questions for primary care providers to answer in the typical 20 minute appointment!

Thankfully, there is a wonderful medical app designed to assist providers in making these complicated decisions. For years, I have used Dr Joshua Steinberg’s medical applications. He has designed a variety of useful point of care apps including Pneumonia Guide, PFT Eval, EFM Guide and PE & DVT Dx Tool. His previous PreopEval app was reviewed on this site several years ago. Recent updates and new evidence surrounding the preop eval has the update and reconfiguration of the app as PreopEval14.

The content of the PreOpEval App is based on consensus guidelines from the 2014 American College of Cardiology (ACC) & American Heart Association (AHA), 2012 American College of Chest Physicians (ACCP), 2011 European Society of Anesthesiology (ESA), 2014 Institute for Clinical Systems Improvement (ICSI), and several recent medical studies on the topic. All of this information has been distilled to a very user friendly point of care app.

Let’s walk through the app via a clinical case similar to one I just saw in clinic recently. A 45 year-old obese female with a BMI of 36 presents in clinic for a preop eval prior to bariatric surgery. Her past medical history is complicated by Type II diabetes, hypertension, hyperlipidemia, and a stroke ten years ago while she was taking oral contraceptives. She is on a number of medications including metformin, ramipril, atorvastatin, and clopidogrel. Now let’s use PreopEval14 to see what needs to be done to “clear” her for surgery.

When you first open the app, it immediately pops up a list of the guidelines on which the app is based. Once you tap on “Get Started”, you will see the app uses an “Algorithm” called “Cardiac Eval” and then has a list of four “Resources”: “Periop Meds”, “Timing”, “Preop Tests” and “Review”. Across the bottom of the app’s main screen are several icons labeled: “Pre-Op”, “Disclaimer”, “About App”, “References”, and “SOR keys”. I was impressed by how much “evidence” the app makes readily available to users. Too many apps tend to bury their references in the app and frequently do not cite the Strength of Recommendation (SOR) on which the app is based. PreOpEval14 does a nice job of including both. 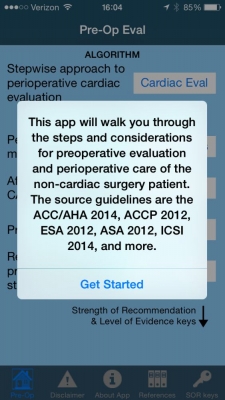 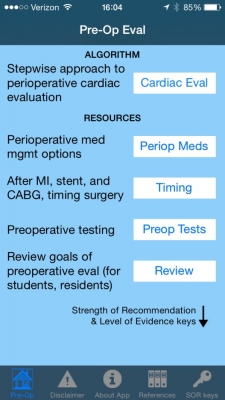 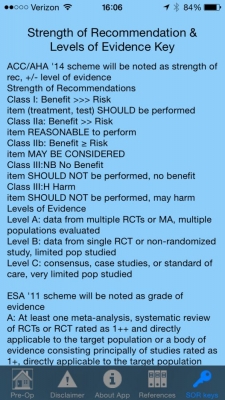 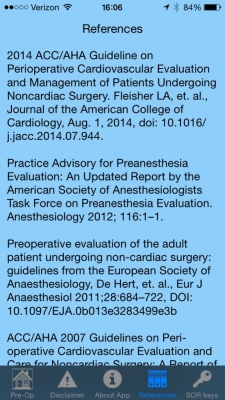 Once you tap on “Cardiac Eval”, the app takes you to “Step 1”, a series of questions about the urgency of surgery and guidance on non-CAD topics such as CHF, valvular heart disease and arrhythmia. So for our patient, her bariatric surgery is non-emergent surgery. For providers unfamiliar with what qualifies for emergent vs. elective surgery the app includes the ACC/AHA guideline information. 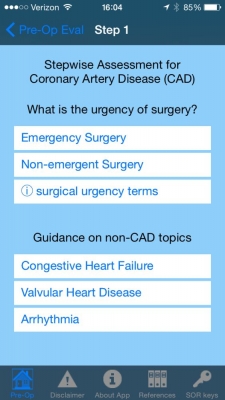 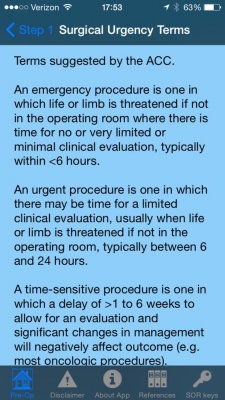