Review of the Nelson’s Pediatric Antimicrobial Therapy 2014 for iOS

As every pediatric provider or parent knows, kids get a lot of infections. From the dozens of viral URIs in healthy children to enteric gram negatives seeding VP shunts, there is a wide range of viruses, bacteria and fungi with which pediatricians do battle. Adding to challenge is the rise of resistant organisms and the increased awareness of the long term sequelae of antibiotic use. Point of care resources to help providers choose the best antibiotic strategies are vitally important – that’s what Nelson’s Antimicrobial 2014 app aims to provide.

The Nelson’s Pediatric Antimicrobial Therapy 2014 app is the mobile version of the Nelson’s Antimicrobial textbook published by the American Academy of Pediatrics. The app’s opening screen includes Contents, Favorites, Games, Updates/Errata, and a BSA Calculator. 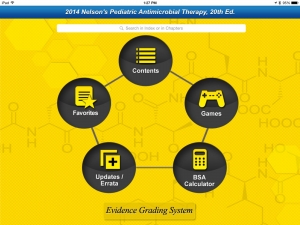 Contents is divided into the same chapters as the textbook itself, which include chapters on choosing antimicrobials, managing CA-MRSA, and antibiotic strategies for specific pediatric situations such as newborns and obese children.

The text’s formatting is useful on mobile devices but the tables are poorly formatted, especially on the iPhone. 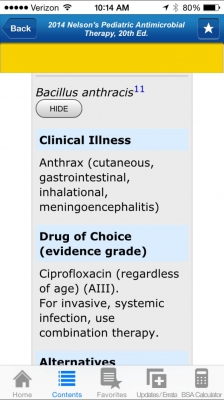 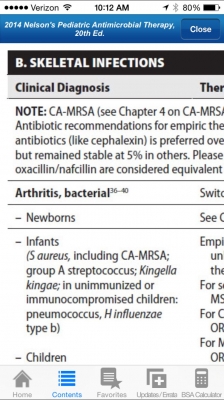 For each clinical situation, pressing “show” lists the recommended therapy and evidence grade. While the recommended medications include dosing guidelines in mg/kg/day, there is no built in dosing calculator – which other mobile apps such as Epocrates and Lexi-Comp include.

Additionally, while maximum/adult dosing is included in the chapter of all antimicrobials, it’s not listed under each condition. For example, if you look up “acute otitis media,” the medication dosing is in 90mg/kg/day but you would have to look up amoxicillin separately for max dosing (there is a hyperlink to that chapter but not to the specific antibiotic). 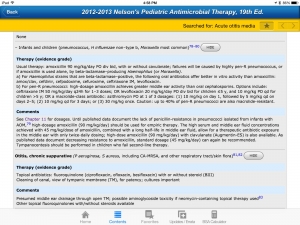 The app contains a couple of games that are better played on the iPhone than iPad. QuizRex is a game where blocks with antibiotic names are matched to clinical situations — matching correctly removes the blocks. The other game is PharmaRumble, where users choose an antibiotic based on its biochemistry. QuizRex is fun and mildly addictive although there are no explanations given or links to the chapters where the correct anti-microbial is discussed. 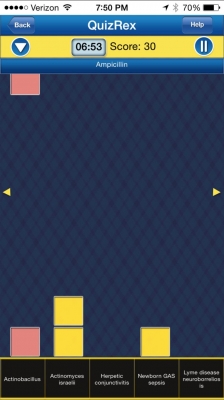 The Updates/Errata section is unusable — it opens to a non-functioning website in an in-app browser. 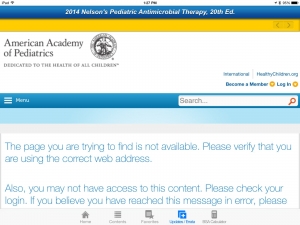 There are a few other hyperlinks which can only be opened in the in-app browser, not in any other iOS browser. And while content can be starred for favorites, it cannot be printed, emailed, or opened in other apps.