This past holiday season, in an eagerly anticipated move among the Diabetes community, the FDA approved the Animas Vibe, an insulin pump that integrates seamlessly with the popular Dexcom G4 continuous glucose monitor (CGM). The significance is twofold: 1) synchrony between devices from two separate manufacturers, and 2) consolidating two receivers into one for a combined controller/viewer for an insulin pump and CGM (See picture below).

The recent focus by the FDA on open dialogue and diabetes technology warrants cautious optimism for diabetes and digital health as a whole. Here are some key takeaways:

1) The FDA is well-aware of their negative public image:

Holding public forums, meeting with patient advocacy leaders like diaTribe, and opening up the doors of their institution suggest that the FDA wants to improve the perception that they are a faceless organization stifling innovation with overzealous criteria. A recurring theme throughout both sessions were that the FDA is committed to improving the balance between safety and innovation. As the saying goes, the first step to fixing the problem is admitting you have one.

2) The pace of innovation and FDA approval is speeding up:

The previously mentioned Animas Vibe was approved by the FDA within approximately 9-12 months after submission, and will be shipping in January. While not exactly lightning-paced, this does represent an improvement upon multi-year approval processes for other medical devices. It’s no accident that three major diabetes technology advances were approved by the FDA in past 3 months: 1) the Dexcom Share, 2) a new Dexcom CGM Algorithm, and the 3) Animas Vibe-CGM System.

Echoing this theme, while drafting this very article, the FDA ended up releasing a draft of guidance on differentiating between non-regulated wellness devices from their regulated medical counterparts.

3) Digital Health Must Adopt Universal Standards In Order to Be Successful:

In the device interoperability FDA workshop, Tidepool (a non-profit organization working on integrating diabetes data from multiple devices) CEO Howard Look summarized the frustration of working with proprietary diabetes devices by imagining a world where digital cameras could not share photos between different manufacturers. Dr. Joe Cafuzzo, lead for the Centre for Global eHealth Innovation, recommended widespread adoption of the IEEE 11073 standard which already includes specifications for glucose meters and continuous glucose monitors. He argued that adopting universal standards would increase rather than decrease revenue for companies, much like the DICOM standard did for radiologic imaging.

When it comes to digital health as a whole, the current environment of “The Internet of Things” makes proprietary formats archaic and unappealing in the long run. This explains why companies like Jawbone and Misfit thrive by maintaining third party support for many fitness apps and devices.

4) Medical devices will go to the smartphone and smartwatch:

As described at length in a previous article,  insulin pumps and continuous glucose monitors lend themselves to smartphone synchronization, and diabetes device manufacturers are publicly showcasing smartphone, smartwatch integration.  Currently, many Type 1 diabetics must carry around 3 separate gadgets in their pockets: the insulin pump controller, the CGM display, and their smartphones. To add insult to injury, the diabetes devices carry small low-resolution screens, and many are not touch-sensitive. Being able to access data and control devices on a larger, high-resolution, touch-sensitive smartphone display would be a significant advancement for diabetes technology. 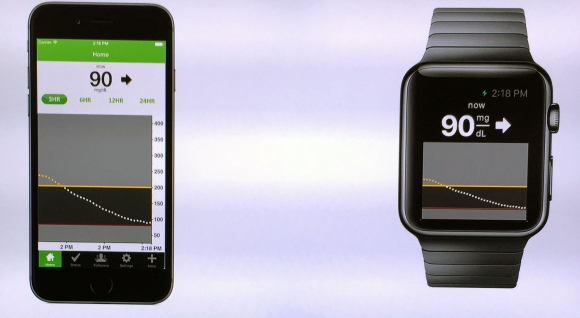 The recently FDA-approved Dexcom Share and Animas Vibe both represent meaningful steps in this progression by respectively pushing data to smartphones and consolidating devices, but many further steps remain before users can control and display information on their iPhones. Regardless, the very fact that progress is being made towards consolidating information to smartphones sets a precedence and roadmap for other wireless health technologies to navigate.

During the insulin bolus calculator portion of the FDA workshop, the conversation repeatedly returned to the perils and potential of smartphone app insulin calculators. Patient advocate Adam Brown of diaTribe laid out a compelling argument that restricting bolus calculator apps carries clear risks by forcing users to rely on error-prone mental math. Howard Look of Tidepool agreed, saying that compared with using mental math, “I would much rather my daughter [with Type 1 diabetes] use an app that hasn’t been regulated.”

On the other hand, Dr. Howard Wolport of the Joslin Diabetes Center recommended extreme caution, pointing to poor app interface design as potentially leading to unsafe insulin doses. For example, as pictured above, he argued that a slider for glucose input can lead to mistaken entries and that a toggle between mg/dL and mmol/L can be mistakenly switched.

Even after a lengthy back-and-forth between the panelists, there was no consensus regarding how and if insulin dose calculator apps should be regulated. Insulin bolus calculator apps are a fascinating case study for medical apps as a whole because the math is conceptually basic, yet incorrect insulin dosing can lead to catastrophic outcomes.

For apps that will assist with managing other chronic medical conditions, clarifying the issue of regulation regarding diabetes smartphone apps will likely set an important precedent.

6) Users/Providers must inform the technology, not the other way around:

Dr. David Klonoff, Editor-in-Chief of the Journal of Diabetes Science and Technology, reiterated that physicians and patients must be involved in software creation rather than engineers alone. It’s safe to say that this echoes the sentiments of the iMedicalApps staff and our readers, but we are also painfully aware of how this principle is often not carried through.  Going forward, digital health companies, physicians, and patient advocates must rely on each other to create life changing innovations.

I’ve repeatedly stated that people with diabetes represent the original quantified self movement, dating back to the popularization of glucose meters in the 1990’s. Similarly, I firmly believe that the current discussions with the FDA over diabetes technology will significantly shape the landscape for FDA regulation of consumer digital health devices as a whole.