Visual acuity testing is a basic part of the physical exam.  It’s usually done when patients present with eye complaints and most physicians are used to measuring visual acuity with a Snellen Chart. This is the traditional Snellen “Eye Chart” that patients are often presented with: 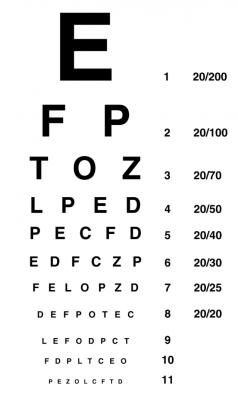 Most physicians carry around a pocket version of this chart. It’s been tested by the publishers for the appropriate distance you are supposed to hold the chart — there is a reference on the pocket cards telling you how far to hold it away from the patient.

Many physicians have resorted to using Snellen charts on their iOS devices. It’s significantly more convenient than carrying around a pocket card that isn’t on you all the time. The comments sections of many of these Snellen chart apps show health providers stating they use them.

When these charts first became popular in the App Store, they were tested for standard screen sizes, such as the original iPhone. However, the popular eye charts currently available haven’t been updated in years. Clearly they have not been tested on the larger iPhone 6 screen.

The following are just a few of the Eye Chart apps I looked at:

This is the same scenario played out by other Snellen eye charts. In my research of the current Snellen Charts, I couldn’t find a single one that had been tested on all iPhone screen sizes and updated within the past year.

Clearly there is a need for developers and health providers to step up and produce Snellen Eye chart apps that have actually been tested for various screen sizes and are updated appropriately. Being able to easily test a patient’s visual acuity at bedside without having to go and look for a card saves time and is tremendously more convenient.

However, this doesn’t make the apps pointless to use. There are still clinical scenarios where using a Snellen chart that hasn’t been rigorously tested is still clinically useful. For example, I still use EyeMD for specific purposes in the ER. When I need to know if a patient has a significant difference in visual acuity in one eye versus the other, any Snellen Chart will do.  When I need a specific visual acuity for a patient, I unfortunately have to rely on a pocket card I have in the ER.

For physicians, you should know that the Eye chart app you’re using most likely hasn’t been tested for your phone, and you shouldn’t be using it to measure specific visual acuity.