By Douglas Maurer DO, MPH, FAAFP

At the 2014 North American Menopause Society (NAMS) Meeting, the NAMS organization launched their first app, MenoPro. This is the first app to incorporate the current NAMS menopause algorithm which was published in the Journal of the North American Menopause Society in 2014. This algorithm was derived from NAMS 2012 position statement and 2013 clinician’s guide to menopause treatment.

The app is designed to be used for either providers or patients and its purpose is to aid in deciding the best treatments for menopause symptoms including both pharmacologic and non-pharmacologic therapy. This is obviously a huge issue since millions of women suffer daily from menopausal symptoms such as hot flashes. 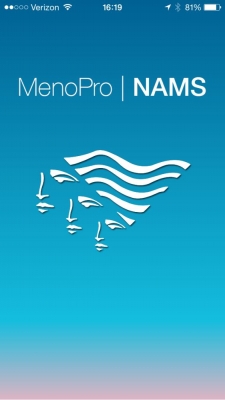 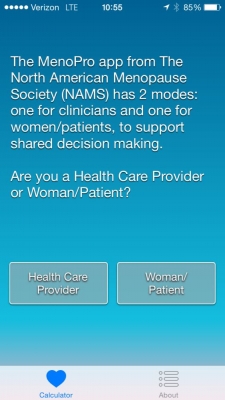 Since the 2002 publication of the Women’s Health Initiative (WHI) study which demonstrated reduced fractures but increased incidence of coronary artery disease, breast cancer, and thrombosis with use of combination estrogen/progesterone replacement, the use of hormone replacement therapy (HRT) has dropped dramatically. In the years since, several studies have validated the original findings of the WHI, while other subgroup analyses have suggested that there are lower risks with younger patients, short duration of HRT, etc. Currently, neither the United States Preventive Services Task Force (USPSTF)1 or the American Congress of Obstetricians and Gynecologists (ACOG)2 recommend the use of hormone therapy to prevent chronic conditions or coronary vascular disease.

Despite the evidence and various position statements, NAMS maintains that symptomatic women should be evaluated for pharmacologic treatment in a systematic way. Furthermore, they recommend that women try lifestyle modifications for at least 3 months prior to starting any medications for treatment of menopause related symptoms. The algorithm is based on evidence from a variety of trials including the WHI. NAMS emphasizes that only women at high risk for osteoporotic fractures should receive HRT. Everyone else should receive either non-pharmacologic therapies or non-hormone based pharmacologic therapies.

The app is easy to use with a clear and intuitive interface. The very first thing the app asks is if you are a provider or patient. For providers, it next asks various demographic questions about the patient including:

It only takes a few moments to go through the questions. At each stop point, the app will pause and state “Getting Recommendation”. At that point, the app gives specific recommendations for medication dosing including potential side effects, drug interactions, etc. 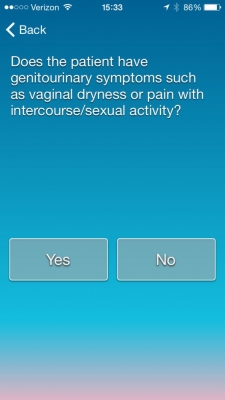 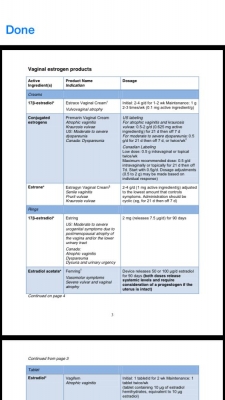 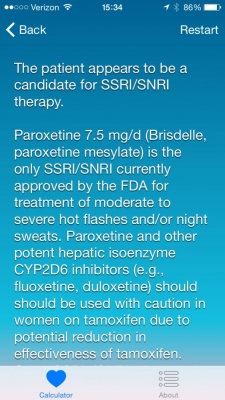 The app also includes many “hand-outs” on topics that can be emailed to patients, printed, or simply read from the device. 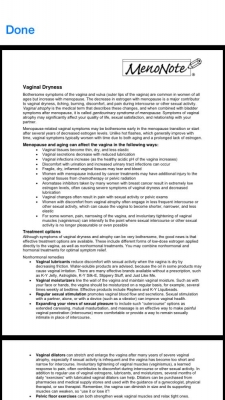 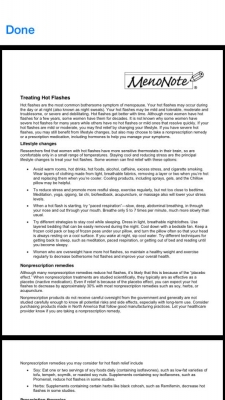 For patients who are interested in HRT, the app takes you through the information required to calculate an AHA/ACC ASCVD score for the patient. If the risk is > 10%, the app informs you that the patient would not be a good candidate for HRT and should consider non-hormonal options. 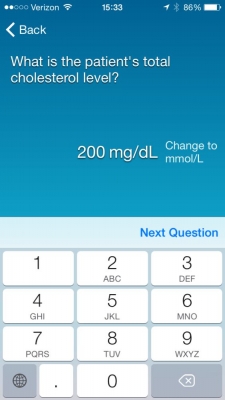 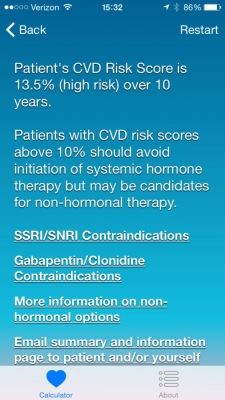 For patients, the app uses a nearly identical user interface and information to ask about their symptoms and potential interest in hormonal and non-hormonal information. This is my only real concern with the app as some of the information presented is quite technical and includes a lot of drug information that may be quite unfamiliar to patients. For the savvy patient, this is probably ideal, but I suspect many patients will be confused by much of the information offered here. The “handouts” included in some sections of the app are fantastic though and the ability to email the information to yourself or read it on the device is a nice touch. 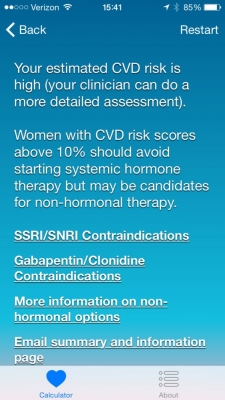 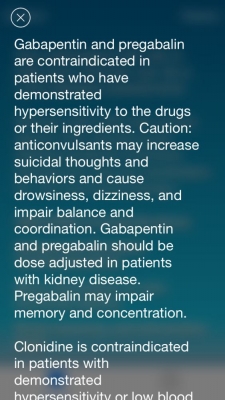 There are not a lot of “extras” with the app such as links to other information, websites, etc. However, the app does have an “About” section which includes some great information for providers and patients about where the information for the app comes from. For example, it includes a PDF of the complete algorithm that the “Calculator” section of the app uses. This is nice to review, especially for providers concerned about the veracity of the information. The “About” section also includes an overview document about how the app was developed and how to use it at the point of care. 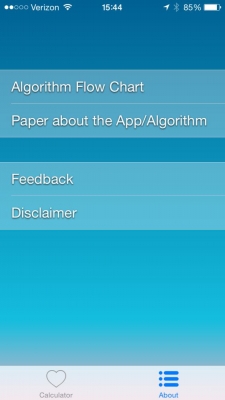 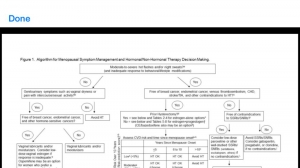 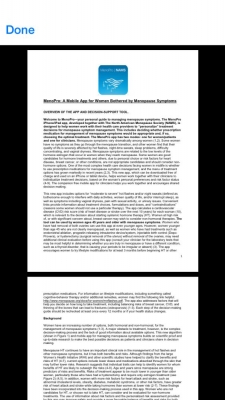 Evidence based medicine
Unfortunately this app is based entirely on a position statement and practice guideline that are evidence-based but have not been prospectively validated. Furthermore, the app still recommends HRT for many patients who have significant symptoms, are young, and < 10 years since menopause, despite USPSTF and ACOG position statements not to prescribe HRT.

What providers would benefit from this App?
Residents, mid-levels and Family Medicine, Internal Medicine and Ob/Gyn physicians.