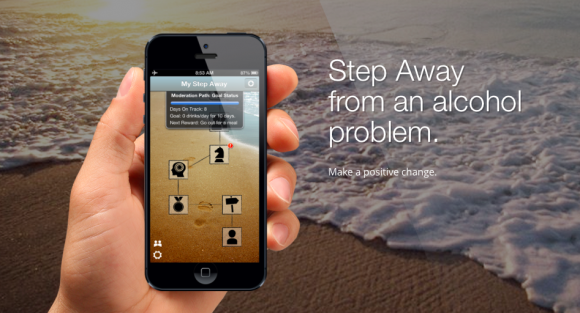 (part one of two)
One of the lesser areas covered by the digital health movement is mental health, yet mental health and substance use play important roles in physical health. Medical treatment costs for those with both chronic medical and comorbid mental health and substance use disorders can be two to three times as high as those without such comorbid conditions, according to the 2014 American Psychiatric Association’s Milliman Report. Alcoholism, in particular, afflicts 17 million adults, and is the third leading preventable cause of death in the United States.

What if an app could help attenuate or extinguish alcohol use disorder? Or other addictions?

Patrick Dulin, PhD, a psychologist at the University of Alaska’s Department of Psychology, has led an NIAAA (National Institute on Alcohol Abuse and Alcoholism) grant-funded team in producing Step Away. The team’s work has been published in Alcoholism Treatment Quarterly and Substance Abuse, with forthcoming articles in Telemedicine and e-Health and the Journal of Consulting and Clinical Psychology.

The iPhone app began as a Windows Mobile program in 2010, and is targeted towards those who possess some motivation to work on their addiction. Much like a personal coach or sponsor, the app helps them gain insight into their alcohol problem and teaches them skills they can use to manage problems, such as alcohol cravings, anxiety and moving away from a drinking lifestyle. It also helps remind them of their goals and their reasons to make a change, particularly during high risk times that can lead them back to drinking. The app maps a user’s drinking patterns, triggers, and mood with daily interviews and weekly feedback sessions. The app even lets users add their own support contacts and non-alcohol related activities to support the user’s goal, which can be either safe drinking or abstinence.

The team’s results from a limited pilot test including 28 users with an alcohol use disorder showed reductions in hazardous alcohol use — with 56% of days spent hazardously drinking at baseline versus 25% while using the Windows Mobile program. Drinks per day diminished by 52%. The application incorporated numerous user inputs, including:

iMedicalApps spoke with Dr. Dulin about Step Away and its implications for addiction medicine.

A lot of mobile health’s attention is focused on other health issues, but not towards substance use disorders and addiction medicine. Would you say that’s accurate?

Yes. A lot of things explain that. As a society, we struggle with stigma around alcohol problems. There are still vestiges of people believing that if [a person has] alcohol issues, it’s their own fault, it’s their own creation, and evidence of weak will. I think the acknowledgement of addictions is still low, and it’s only been recently that there’s parity for treating alcohol and drug addiction on a federal level. Some of that is starting to change, and it’s obvious that it is necessary by looking at statistics and how much damage [alcohol use disorders] have on people. The health costs are pretty phenomenal.

Yes, and in your research papers, you also mention poor availability of services, lack of insurance, cost of treatment, work-related complications, transportation problems, and — most importantly — “personal attitudes about attending a treatment facility.”

You know, the rate of identification of the disorder and the rate of treatment is so low. We’re looking at one in 12 people getting some sort of attention, any sort, whether it’s AA (Alcoholics Anonymous) or a counselor or treatment facility, for alcohol use problems. We’re still on the frontier for developing meaningful population interventions for people’s addictions.

So your app helps relieve some of the barriers to access. How is Step Away different from other health apps?

There are a few other services out there doing similar things. In New Mexico, there’s a group that developed the Drinker’s Checkup, a website that has been shown to be pretty helpful for people with a drinking problem. It’s a self-managed website primarily oriented towards assessment and feedback and doing some basic goal-setting sorts of things. That’s quite a powerful intervention — just the assessment and feedback — in any sort of alcohol treatment. Research is showing some pretty good effects from their website.

I’d say that the app Step Away and its first prototype really builds on some of that foundational work, [but even better,] using smartphone capabilities to help manage problems in the moment. With a website, how many people are going to go home and record their cravings, for instance? The beautiful thing about Step Away is that it has those interventions right there on a device that people carry with them all the time. Step Away takes these interventions that we know work, with 30 to 40 years of research on how to help people with addictions, and places them onto mobile health platforms.

So there’s the work being done in New Mexico, then there’s another group in Wisconsin working on [something similar], Dave Gustafson, University of Wisconsin, developed a system called A-CHESS (Addiction Comprehensive Health Enhancement Support System) [Ed. note: covered previously on iMedicalApps in early 2012 and late 2012].

Yes, I think CHESS was a web tool at one point.

That web tool has been in development for a long time. They are the first people who developed technology-based support for health outcomes. They developed some of their foundational knowledge into A-CHESS, for people in recovery. They have smartphone apps, doing some of the same things as Step Away does, but their tools are focused as an adjunct to existing treatment.

Step Away is different from A-CHESS in that it is being developed as a stand-alone, self-managed intervention system. [We are] trying to target those [who are] not finding their way into treatment facilities, and not willing to talk to somebody. It’s 90% of the people, really. People who want to work on it by themselves, and don’t want to admit to another human being that they have an addiction.

In the next part of this interview, we discuss how Step Away can extend to other substance use disorders and addictions, as well as the future of Step Away. Step Away is available on the Apple App Store for $4.99, for iPhone.