Extending to other addictions: our conversation with Step Away team researcher Patrick Dulin

(part two of two)
Step Away, an app produced by a team led by University of Alaska psychologist Patrick Dulin, helps those with alcohol use disorder by alerting them of potential triggers and events — such as a user’s proximity to a bar or liquor store — and by educating them on alcoholism. Their work has been covered in Alcoholism Treatment Quarterly and Substance Abuse. 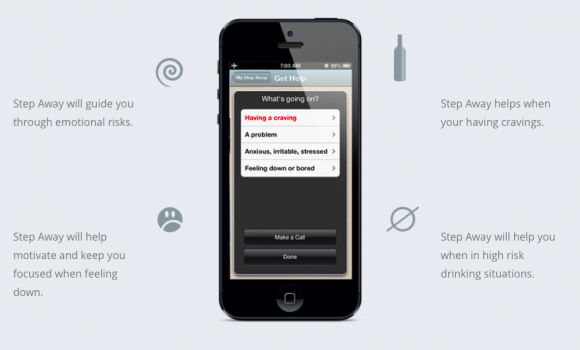 In our last interview, we discussed some of the barriers to access for those with alcohol use disorder. In the next part, we discuss more on how the Step Away mobile app works, and the future of addiction apps.

Alcohol is one type of substance, but there are other drugs as well: methamphetamine, cocaine, heroin, and opiate prescription drugs. Could Step Away extend to other substance use disorders?

Definitely! If you look at people with other kinds of addictions, it’s the same kind of [pattern]. There are some with more stickiness than others, of course, but I don’t think it would be difficult at all to create a version of Step Away for use with other types of addictions.

I’ve been approached by people to develop something similar for food [addictions] and overeating. There are similar processes that Step Away could provide. “Here’s your goal, here’s how you’re doing, [and] here’s your progress.”

In fact, we did this initial study of the Step Away prototype. One of the things that came out of qualitative interviewing of those who used the prototype is that just having that daily interview [is helpful]. “Hey, you’re working on this alcohol problem. Let’s figure out how you’re doing today!” Then it tells people, “You used to have 10 drinks a day; now you’re down to four…” People have said that [helps with] accountability.

There have been news reports about how many people eventually abandon their fitness trackers. What do you think makes people stay engaged to Step Away?

What makes them motivated to keep using the system is that the daily interview in particular, and the weekly feedback, enhance utilization. That’s a very important part of how it will be sticky for people.

In Step Away, the feedback is extensive: how users are doing over time, how their mood has fluctuated over the week, what their drinking patterns [are]. It also helps them think about things that could be difficult for them in the coming week. Is there a wedding coming up? Another stressful event? Let’s set up a reminder when that event comes up. It provides some extra help for upcoming events with a reminder, their goal, and reminder photos for making a change. So if they have a wedding [to attend on] Saturday at 5pm, they get a notice at 4:30pm, [the system will then show them] reminder photos for making a change.

And so, one of the things that’s important to describe in Step Away is giving people options — a motivational framework — to enhance their awareness of the problem and the things they struggle with, and giving them choices. It doesn’t really push anything. It’s not prescriptive. [It just presents] “here are options for you” once it’s high-risk time. If [the user] typically drinks Saturday evening, it will give the user other things they can do [then].

My experience clinically is that it’s a good approach to enhance their awareness and provide options. Anything more prescriptive than that… can end up with reactance and less buy-in. I’m really interested in helping people enhance motivation.

It’s kind of like an external frontal lobe! Let’s stay focused on a goal!

So what’s next in store for Step Away?

In the past, we got funding from NIAAA (National Institute on Alcohol Abuse and Alcoholism). But then after the study was over, there was no more money for ongoing development. So I arranged for some private funding to help develop the system and developed my own company as well.

I think the future is a combination of research focused on effectiveness and usability… as well as effectiveness over the long term. There are no good long-term effectiveness studies in the alcohol realm on these types of interventions.

And there’s a business element as well. I’m approaching it from both angles.

It’s certainly not an expensive app, and it will never will be, because the goal is to try to reach a lot of people who otherwise wouldn’t get any type of help.

Any other similar apps in store for the future?

We have another application at the NIAAA to do a long-term effectiveness study with Step Away. We want to gather a large group of participants — maybe 200 or so — and then a control group, so it would be a randomized controlled trial looking at effectiveness over the course of a year. We’re also asking academic questions about how people’s success relates to their goal of either moderating or abstaining from drinking. As you know, in the modern healthcare world, if an intervention is not shown to be effective, it won’t be taken up by the health care system. We’re focused on [augmenting] the knowledge base on the effectiveness of Step Away.

We’re [also] focused on enhancing the user interface. It can really be better as far as the ease of use. Providing a tool that is both engaging and easy to use is very important to us, particularly as our research shows that the more users utilize the system, the better their outcomes are. Also, the next step is to make an Android version. All these things require money for improvements and enhancements. We are going to be starting a crowdfunding campaign through Indiegogo to help to fund these improvements.

I think some people will look at what we’re doing, and [declare], “I’ve been working in addictions for 20 years, and an app is not enough.” [But] I think that for many people, especially those early on in their addiction process, [this] could be enough. In our initial study of the first version of Step Away, it helped people who were actively drinking and met criteria for an alcohol use disorder reduce their heavy drinking days by over 60%. We have evidence that technology-based interventions, whether through a website, an app, even a good self-help book, can be very helpful in changing drinking and it certainly beats the effect of no intervention at all, which is what 90% of people with alcohol dependence currently receive.

Step Away is available on the Apple App Store for $4.99, for iPhone.