Epic released the most important update to mobile health management and tracking today by updating their MyChart app to sync with Apple’s Health App, enabling a Track my Health section.  When health systems enable the Track my Health section, patient’s will be able to sync their MyChart app with their activity trackers and health devices — such as blood pressure cuffs and blood glucose monitors — using the Apple Health app as the intermediary.

I wrote several months ago why Apple’s partnership with Epic was a game changer for patients.

There are two key factors in play here from a public health standpoint and a populations based approach to mobile health management.

First — Epic covers more than 50% of the patient population in the United States.  They are by far and away the most popular combined inpatient and outpatient electronic medical record that physicians use to manage patient health. Millions of health care providers already use the Epic platform to communicate with patients, see lab results, order tests, and much more.

Second — with the release of Apple’s Health app and the HealthKit platform into iOS 8, Apple has made their app the most popular health tracker currently on the market. One in four iOS devices is running iOS 8, that translates into tens of millions of individuals.

Also, for better or worse, you can’t delete Apple’s Health app, it’s baked into the core of iOS 8. Whereas Samsung and other Android manufacturers have fragmented the Android health market with their individual iterations, Apple has presented a unified Health metric app on a singular mobile operating platform.  As an aside, it is unfortunate Google has not presented a counter to Apple’s Health app (Google Fit is a platform, not an app).

These two key factors are a big deal because there is significant interplay. From a public health standpoint you now have the ability to track health metrics in a more uniform way (Apple’s Health App), and now you have the ability to sync that data into an electronic medical record that is covered by more than 50% of the patient population. 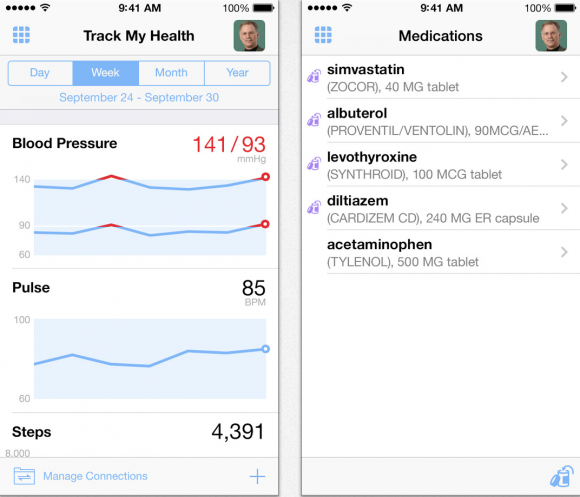 You now have the ability to pull up your patient’s chart, and along with seeing what medications they are on, you can easily see what is happening to their blood pressure levels at home — while this was present in smaller electronic medical records before, now it’s available on a tremendous scale to the general physician and patient population.

If your patient’s blood pressure cuff is wireless and has an app that syncs with the HealthKit platform, you are reassured the readings are more accurate as they haven’t been manually placed by your patient.  There is significantly less hassle for the patient in tracking their health at home.

This simple workflow is huge for physicians and patients. We don’t have to read sheets of blood pressure markings, or ask our nurses to manually insert the data into the patient’s chart.

The data now is “actionable”. It’s no longer floating around on pieces of paper, or being guessed by patients.  It’s in the same platform (Epic) we use to give patient instructions, titrate medications, view patient results.

Obviously — with this ability there should be caution. We need to be careful what metrics we are collecting as well. We already have massive amounts of data we need to go through during patient encounters, we don’t need to burden ourselves with extraneous information (e.g. Heart rate variability tracking).  The success of the Track my Health feature will be based on the ability to give physicians the right type of health information that matters.

But as a whole, the public health and mobile health tracking community should be excited by this collaboration between Epic and Apple. It opens up avenues to manage chronic disease in an entirely different way due to the number of patient’s and physicians who can now get involved.

Personally, I’m not sure even Apple or Epic really know what they have stumbled onto.