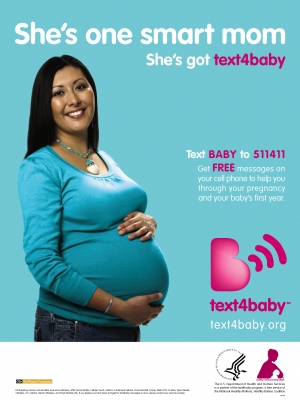 The health of a nation is measured through many indicators, one of the most important and widely used being infant mortality rate.

Infant mortality rates are a reflection of numerous complex, interconnected factors like access to medical care, quality of care, maternal health, knowledge-gap, socioeconomic disparities and public health policies. The estimated infant mortality rate for the United States in 2014 is 6.17 infants per 1,000 live births, a rate that measures poorly among other developed countries. The reasons for our relatively poor birth outcomes remain highly debated and complicated, but since 2010 Text4Baby has focused all of  its efforts on addressing one aspect of the problem and thats helping pregnant women and mothers obtain critical health information via mobile technology. With all of its popularity and success over the past few years, Text4Baby has now released an app version of Text4Baby, as a supplement to the SMS program. iMedicalApps will be releasing an article reviewing the app in the upcoming week.

Text4Baby is a free text messaging service for pregnant women and new mothers, although they have recently expanded the scope of their service to include information for expectant fathers and fathers with babies under the age of 1. Since its national launch in 2010, Text4Baby has enrolled nearly 756,000 users and has excelled in reaching its target audience:

Signing up is easy. Soon-to-be or new mothers and fathers can text “BABY” (or “BEBE” for Spanish) to 511411 or sign up using the website. After entering the babies delivery date, the user will receive on average 3 informational messages a week tailored to the woman’s due date or baby’s date of birth. Messages will be received until the baby turns 1 year of age. There are over 250 messages covering the following topics: safe sleep, immunizations, breastfeeding, nutrition, oral health, family violence, physical activity, safety, injury prevention, mental health, substance abuse, developmental milestones, labor & delivery, car seat safety, and exercise. In addition to messages/tips, the service offers appointment reminders (through texting appointment date & time)  and access to information on local health care services through an array of hotline numbers. 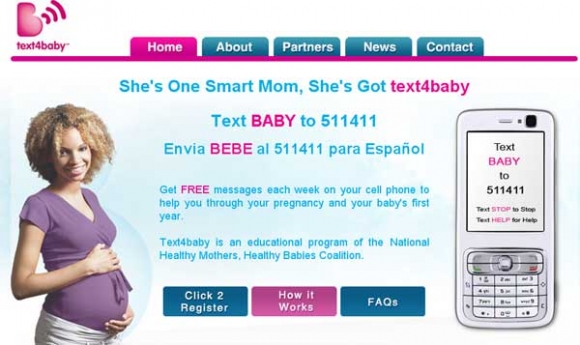 Text4Baby is partnering with research organizations and  granting them access to the enrollment database for research purposes. These partnerships have resulted in some interesting findings. Preliminary research shows that Text4Baby is improving appointment compliance, knowledge gap, resource awareness/utilization and patient-provider communication. The Text4Baby database has the potential to make a tremendous public health impact in driving how and what issues we decide to tackle in the maternal and newborn health sector.

According to a survey done by CSUSM:

Many well meaning mHealth initiatives fail due to their inability to constantly reevaluate their intervention through data and outcomes. Text4Baby has stayed true to its data-driven mission and has excelled in routinely monitoring and analyzing data collected by the program; a great example of how mobile health, when done right, can make a big difference.