iMedicalApps.com had the privilege of reviewing several newer glucometers, and we are publishing our reviews in the upcoming weeks.  These mobile monitors are hoping to transform the staid form factors and functionality of current glucometers. (Check out an older review of iBG Star, and we have one of the Verio Sync coming this week) 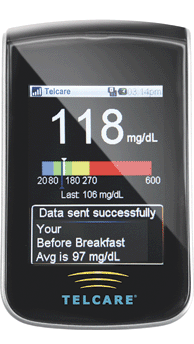 Blood glucose monitors, popularized in the 1990’s, are the precursors to the current generation of sensors in the digital health and quantified self movements. However, in the age of Fitbit’s and iPhones, glucose monitors are really showing their age. Most glucose meters are stuck in the past with old-fashioned displays, data that is difficult to export, and limited functionality.

The Telcare Blood Glucose Meter (BGM) aims to change that, with a color screen and cellular connectivity that automatically uploads your blood sugars to the cloud. While the Telcare device itself might be more on par stylistically with the Blackberry generation, the Telcare BGM serves as an essential transition step for glucose meters by adding cloud storage and analytics while retaining a familiarity for users of all ages and tech-savviness.

The Hardware: More Blackberry than iPhone 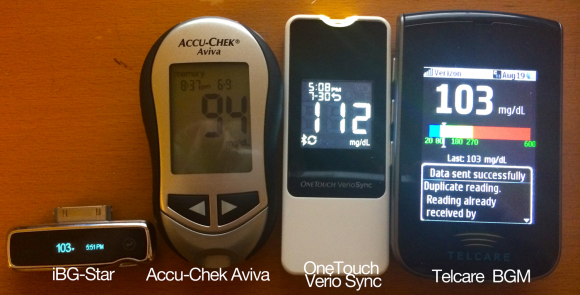 The Telcare BGM is bulky, more so than most other glucose meters, but this isn’t all that bad.  The large, color screen improves readability, which can come in handy for older folks or those suffering from diabetic retinopathy. And despite its heft, the Telcare is surprisingly light.  In hand, it feels no heavier than the Accu-check Aviva (pictured). 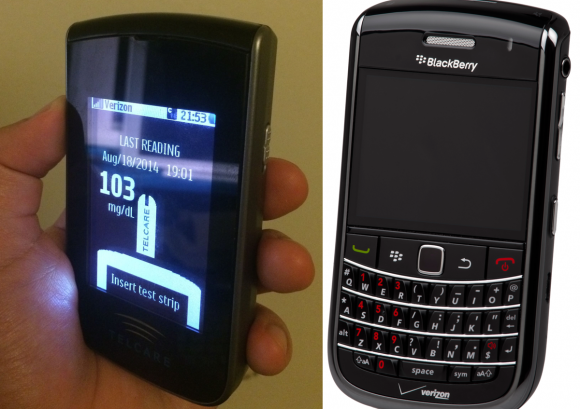 Aesthetically, it reminds me of the Blackberry Bold with its boxy curves, and lack of a touchscreen. To navigate the BGM, there are 3 buttons on the left side (up, down, and select), with a hard switch on the right side. The screen is fairly low-resolution (once again reminiscent of the Blackberry era), but is completely readable, especially when compared to traditional glucometers.

One important note is that the Telcare’s cellular synchronization and color display do lead to decreased battery life. During my testing period where I was testing my sugar 2-3 times a day, I had to recharge the glucose meter every 10 days or so. Keep in mind that traditional glucometers last months to years, so the concept of a glucose meter running out of batteries takes some adjustment. 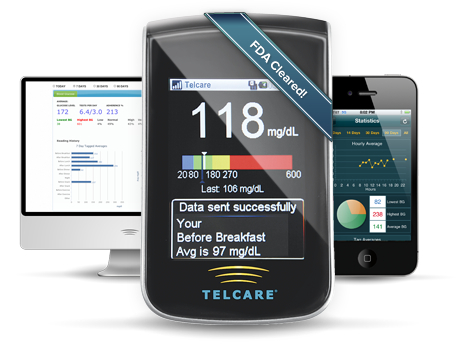 With its own cellular 3G antenna, the Telcare automatically uploads blood glucose recordings to its central cloud server using the Verizon network. At this point, users can access their data through any web browser, or use the partner app Diabetes Pal for Android or iPhone. 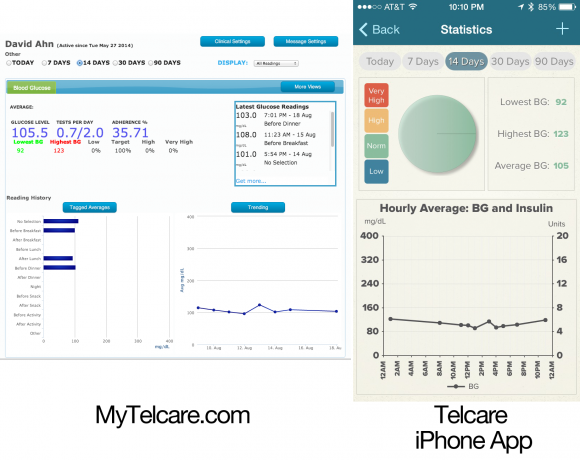 The web portal MyTelcare and the Telcare companion app Diabetes Pal are not particularly cutting edge, but are fully functional and easy to use. The iPhone app Diabetes Pal provides very straightforward graphs, pie charts, and hourly breakdowns of blood glucose, which go light years beyond the standard glucometer option of scrolling back through a glucose log one at a time. Both the web portal and smartphone apps also allow for the manual addition of extra blood glucose readings.

Cost: Will Your Insurance Plan Cover It?

When it comes to pricing, it’s an issue of good news and bad news. The good news is that every service provided with the Telcare BGM is absolutely free. The MyTelcare portal is free, allowing others to view your blood sugar data is free, and the smartphone apps are free. Even more impressive: there is no separate fee for the cellular service to upload sugars over the Verizon network. Forever.  (The cellular service is subsidized by the price of the test strips).

The bad news is that the Telcare itself costs $150 and uses proprietary test strips which must be purchased directly through Telcare. While they are priced similarly to other high-end glucose test strips (50 count costs $55), they might not be covered by your insurance plans. In the two years since its launch, Telcare is making headway and is gaining coverage with various insurance plans, and they will do a full inquiry for users who fill out this form.

The Telcare BGM: A Physician’s Perspective

As a digital health enthusiast and endocrinology fellow, the Telcare BGM hits close to home. I interact with diabetic patients and their blood glucose readings on an hourly basis, and I daydream about futuristic glucose meters that might revolutionize diabetes care like the iPhone did for the cell phone industry.

When I first heard about the Telcare, I was left wanting more. I didn’t fully understand why they would use a 3G signal to bypass the smartphone and transmit directly to the cloud. I worried the Telcare just wasn’t revolutionary enough. It seemed like a blood glucose meter that uploaded to the cloud, and that’s it.  What happened to all the potential for bluetooth syncing and smartphones? 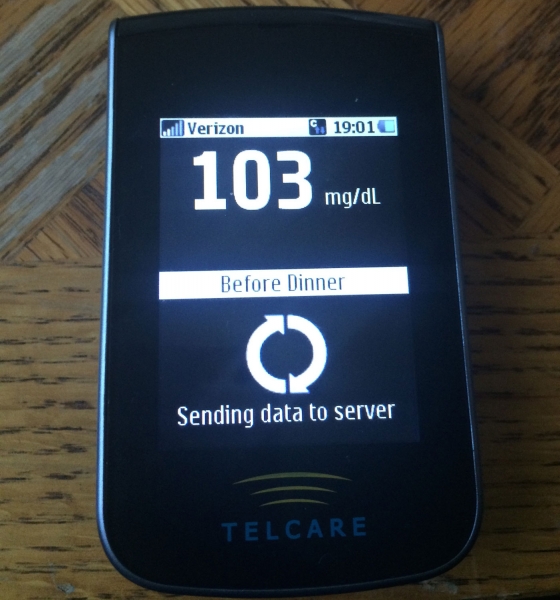 However, in use, I realized the 3G cellular connectivity is one of it’s strongest features.  It allows the Telcare BGM to be completely familiar, requiring no additional effort for uploading sugars to the cloud.  With many patients with diabetes being over 50 years old, I would not hesitate to recommend the Telcare to any of my elderly patients. It operates in the same way as any other glucometer, and features a large and colorful screen. By not requiring a smartphone, it means that every Telcare user’s sugars will be uploaded to the cloud regardless of whether or not they own a smartphone. For patients wanting to go further, they can install the smartphone apps or log into the portal, but it’s not required.

After a one-time setup process that is easy and straightforward, their providers and caregivers can log in (either via web portal or smartphone app) and view the user’s recorded blood sugars in realtime.  As a diabetes specialist, I often tell my patients to call, fax in or drop off their glucose log two weeks after making a medication adjustment. The reality is that only a fraction of my patients follow through. With the Telcare, I would be able to view my patient’s sugars (or see if they are not checking their sugars at all), which can improve the recommendations I make for them.

Obviously, there is a fine line between too much information. I don’t want to be overburdened by micromanaging every blood glucose reading for every single one of my patients. However, I can sleep easier by being made aware of routinely high blood sugars above 400, or severe hypoglycemia.

There’s also the potential for cost savings with improved glucose surveillance: in a study looking at insurance costs for diabetic patients using a combination of the Telcare BGM and a diabetes management call center, the net savings provided by the services were approximately $600 per user per year.

My numerous comparisons to BlackBerry are not by accident. In 2014, it’s easy to misconstrue this as a backhanded compliment, but Research in Motion (now BlackBerry) dominated the smartphone industry from 1999 to 2006. The BlackBerry phones served as a necessary herald of the future potential of smartphones.

Similarly, the Telcare BGM serves as a vital transition step for blood glucose monitors that are stuck in the stone age. From one perspective, it looks and feels like a traditional glucometer. It does not require a smartphone.  However, by wirelessly synchronizing its data to the cloud using 3G service, it opens up a world of possibilities with its MyTelcare web portal and Diabetes Pal smartphone apps. The ability for third parties (like health care providers, caregivers, or family members) to view glucose readings in real-time is simply not possible with other glucometer solutions.

In the current cautious FDA climate, and amidst physicians who are slow to adopt newer technologies, the Telcare BGM plays a key transition role between aging diabetic patients and providers, and their younger, tech-savvy counterparts.  Here’s to hoping that more insurance providers will also realize the significance of the Telcare BGM and include them in their coverage plans.