Kurbo Health, another Rock Health company, has created a mobile platform that aims to help parents and pediatricians guide overweight and obese children to lose weight safely and effectively.

How did you go about creating this app?

Strober: When I had this issue [of obesity with my children] and I went to doctors, they had no recommendations for me, no real suggestions, other than the basic “exercise-more, eat less”. This launched my spending time researching what was available to help parents with overweight children. I learned that there were a number of exciting companies for adult weight loss, whether it was myFitnessPal or Omada Health. In addition, I discovered the Stanford pediatric weight control program. They have an in-person program, but it was $3,500! With an in-person visit, as a working parent, I didn’t know how I was going to [accommodate] that.

I just realized that we had this great Stanford program that works. Why not take this into a mobile program, with a gamified mobile app and remote coaching.  Lots of research has demonstrated that for weight control, remote coaching via text, Skype and phone calls could be as effective as in-person visits, and more accessible. Plus, kids love their smart phones….why not engage them in the solution?

When did you start the mobile app adaptation?

Strober: We started May 2013, just over  year ago. We licensed the basic program from Stanford, developed the app and remote coaching model, and started the beta in March. The beta has gone great. 85% of the kids reduced their BMI. 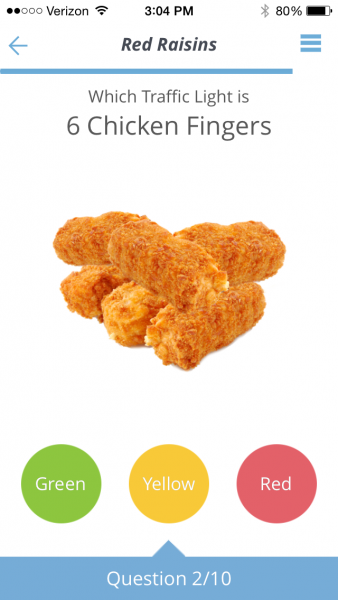 That’s remarkable. How does it work?

Strober: It’s based on the traffic light diet, and kids track their foods. Instead of tracking calories, they track Red, Yellow, and Green foods. Green foods are fruits and vegetables. Yellow are protein and whole wheat bread. And, basically, sugar, white bread and deep fried foods are Red foods. What we do is we get them to track their Red foods, and reduce the Red foods by 7% per week. Maybe they start with 70 red foods, and the goal is to reduce it by a few a week until they get down to 3 or 4 reds per day. The kids then become intrinsically interested in losing weight.

So it coaches them. Do their parents track their progress?

Strober: We try to take the parents out of the equation. The coaching is done by the program, not by the parent. The program [can give feedback and say] “You have too many reds.”

The goal is to take some of the pressure off the parent, and put the pressure on the program.  You’d be surprised: at the beginning, [the kids] might not be that motivated, but once they start realizing it can work, they are pretty likely to continue. We do have them input their weight once a week, and show charts. So we give them feedback.

I can imagine that this may be dangerous for teenagers with eating disorders such as anorexia, bulimia, and binge eating disorder. Has that been considered?

Strober: We have a fantastic expert on eating issues on the advisory board and he is advising us on how to make sure we are careful with at-risk children, and we have alerts built in if a person loses weight too fast or [is] not eating enough foods.  Children under 13 are required to have a parent sign them up so we make sure they are engaged and able to support their child through the process. 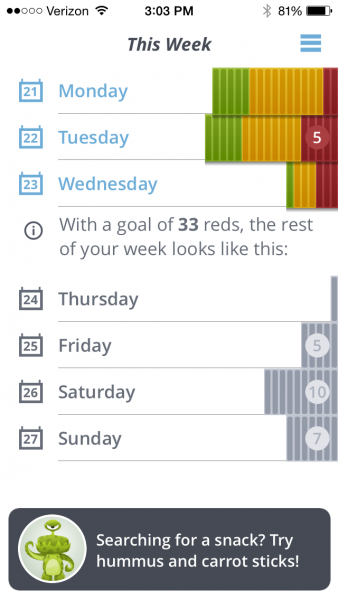 It really does work. It’s not magic. This is not a pill. This is behavioral modification. It’s simple, it’s easy to follow, and it doesn’t feel punitive, so the kids don’t feel like they’re being deprived of what to eat. So they seem to really respond well to it. The parents lose weight too! We also had a mom [who] lost 35 pounds and her daughter lost 15 pounds.  It’s fun for the whole family. They can track their stats together, and it reduces the tension in the household.

Strober:  Currently we have a free app with virtual coaching that works great for very motivated children.  But most kids need additional support and motivation and we charge for coaching.  The coaching is $75/month. That’s for a once a week call, checking on the child’s progress, giving them feedback and suggestions on how they can improve.

A large affordable care organization ([ACO]) in Santa Clara was interested in this, and they did a survey where over 80% of the overweight kids said they would prefer a mobile app treatment, not in-person treatment. So [the ACO] will be recommending this to the kids for those above 85th percentile of body weight.

Kurbo Health is an iOS-only app, available on the App Store and on the Kurbo website at www.kurbo.com. An Android version is due September.A 2 week free trial of the service is available for consumers.