The Proband app is a pedigree drawing app developed by the Center for Biomedical Informatics at Children’s Hospital of Philadelphia that utilizes the iPad’s touch screen to easily draw pedigrees. The intuitive app can be used by anyone – clinicians, genetic counselors, or patients to capture complex family histories and export it as a PDF. The app’s $4.99 price and a couple of small formatting quirks will, however, limit its utility somewhat.

Purpose of App Review
Taking detailed family histories is one of the first skills that aspiring health professionals learn. And as genetic linkages become better described, from clear Mendelian patterns in conditions such as Tay-Sachs or Cystic Fibrosis to multifactorial environmental and genetic patterns in diseases as diverse as Autism and heart disease, a complete family history pedigree may become a standard part of a patient’s medical record. Proband, an app named after the “proband” i.e. the individual being studied in the pedigree, utilizes the touch screen benefits of the iPad to easily draw pedigrees. It is an easy-to-use app that lacks a couple of features that would be expected for its $4.99 price tag.

User Interface
Proband first opens to a tutorial on the app’s interface. It is virtually all touch screen based. One can create a blank pedigree without a template, open an existing pedigree, or create one based on a three-generation template. One finger touch adds a female (by default, the first person added is the “proband”), two adds a male, and users can drag to create relationships between nodes. 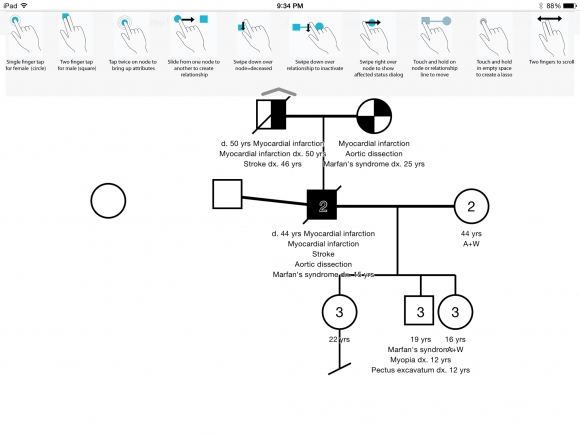 Double-tapping a node brings up a detailed attribute window, where users can input a number of characteristics such as age, health, and adoption status. In the details window, users can also add up to four conditions in disease quadrants that will apply to all characters in the pedigree and diagnoses/carrier status that apply to the individual alone.

Users can also free-text in notes. The app automatically places many of the standard notations in pedigrees, such as sex, adoption status, pregnancies, or donor status. To save space, users can also input numbers to indicate that one symbol refers to multiple family members. Holding down and circling (“lassoing” in the app’s parlance) an area opens up an annotation function, that can be used to input ethnicity.

Once the pedigree is complete, it can be exported, either as a PDF or as a Proband file. It can also be emailed as a PDF or Proband file. Exporting as PDF prints notes and the key to the disease-based conditions, along with a list of conditions included under the “diagnosis” tab. 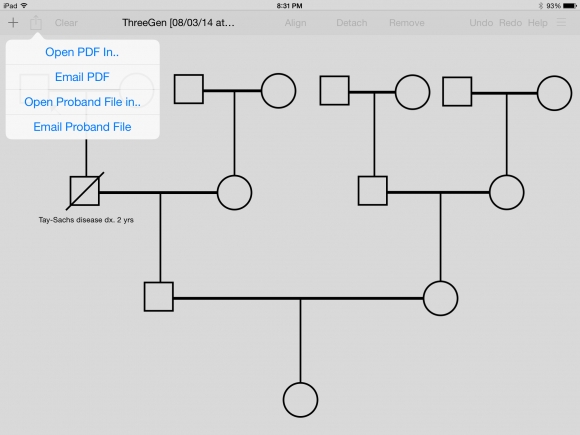 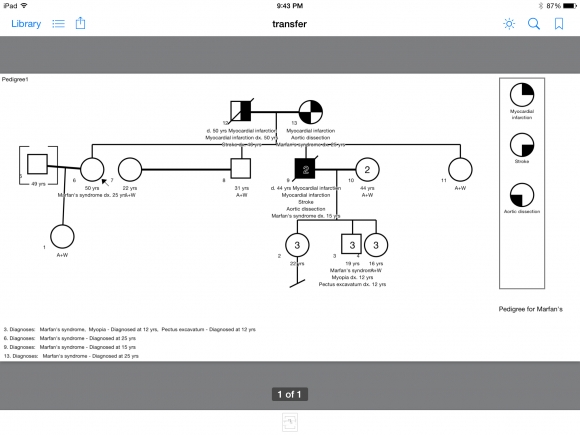 The app is intuitive and easy to use, but there are limitations of its touch and drag-and-drop format. The pedigrees get cluttered easily, and although one can pull partially completed areas of the pedigree, the formatting makes the text unclear. Pressing the “align” function straightens the relationship lines, but it results in some nodes becoming even more cluttered. Furthermore, the text runs across the lines, making it hard to read. Another frustrating feature is that you cannot add names or initials to the nodes;for more extensive family histories it can be hard to keep track of who is who, especially if there are family members with the same age and sex. Lastly, while a minor annoyance, the app does not automatically order the nodes under genetics conventions, i.e., by age and with the male on the left. 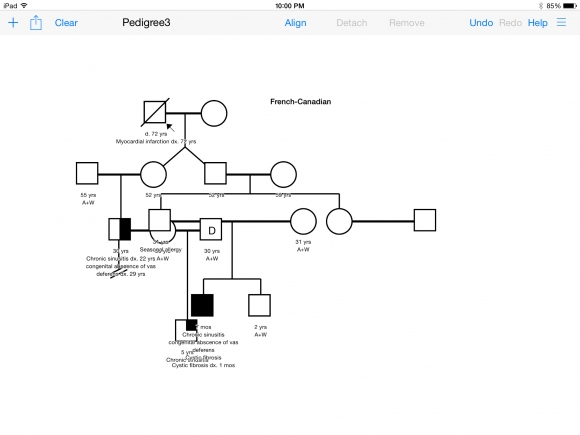 The app uses standard genetics notations and pulls diagnosis data from the Human Phenotype Ontology (HPO), which is based on data from the NIH’s Online Mendelian Inheritance in Man (OMIM) database. OMIM is one of the key data sources used in clinical and research applications of human genetics.

Patients that may benefit from app

Patients who have a history of genetic conditions.