What the iPhone based Artificial Pancreas means to patients and physicians

At the recent 74th annual American Diabetes Association Scientific Session in San Francisco, results from a simultaneously published article in the New England Journal of Medicine were formally announced. The publication consisted of two separate studies demonstrating the efficacy and safety of an “artificial” or “bionic” pancreas for people with type 1 diabetes. 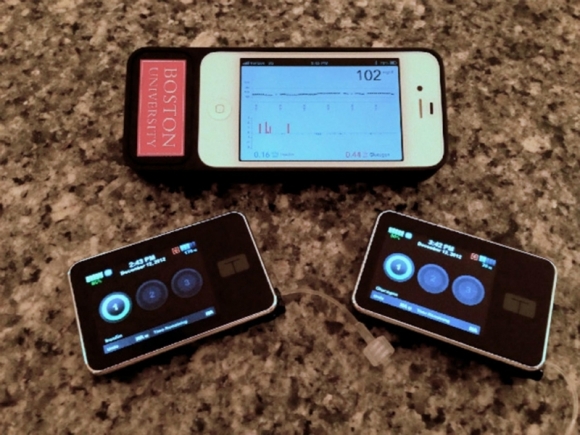 While small details from what was previously referred to as the Beacon Hill study were familiar to the diabetes community, the announcement from the ADA served as a coming-out party for the Boston University-based project. Utilizing an iPhone and two of the latest diabetic gadgets (a Dexcom G4 continuous glucose sensor and Tandem T:Slim insulin pump), it’s no surprise why such news would catch fire.

So What Is An Artificial (or Bionic) Pancreas?

Type 1 diabetes, by definition, results from a failure of the pancreas to properly secrete insulin and regulate blood sugar. The Boston University team led by Dr. Steven Russell and Edward Damiano is one of several groups throughout the world working on combining several devices to re-create pancreatic function of glucose sensing as well as hormonal regulation of glucose.

Most artificial pancreas projects consist of a continuous glucose monitor (CGM) and a multi-hormone pump controlled by a software program to mimic the logic/intelligence of a pancreas. For this project, they used a Dexcom G4 CGM and two separate Tandem t:slim pumps for secreting glucagon and insulin–hormones which respectively raise and lower blood sugar levels. The final piece is the brains, running on an iPhone 4. 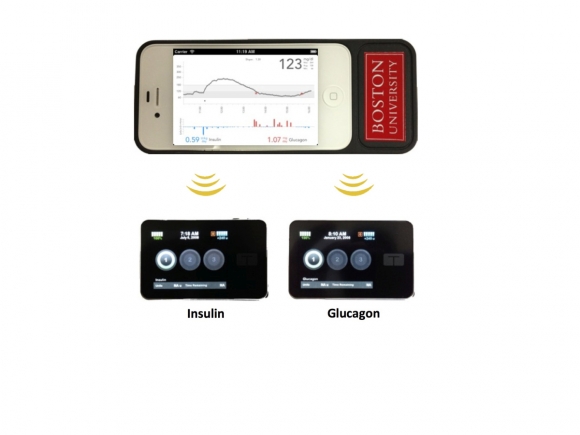 For patients with type 1 diabetes who have grown accustomed to manually monitoring their blood sugar, closely monitoring their diet, and calculating/administering insulin multiple times a day, the potential to live a life free from this constant mental burden and fear of hypoglycemia seems almost too good to be true. Amazingly, to start off, the bionic pancreas only required the user to enter in a single parameter: their weight. As such, the software setup for a 24 year old female with Type 1 diabetes to use the bionic pancreas would be no more complex than configuring a treadmill to count calories burned.

The NEJM article details two cross-over studies: one adult study that looked at 20 subjects who were given free reign to eat and exercise at will during a 5 day period. While they were under the constant supervision of a nurse and housed in a hotel, their behavior was not limited so long as they remained within a 3 square-mile area around the hotel. Another cross-over study looked at 32 children at a diabetes youth camp. During the experimental phase, they were outfitted with the bionic pancreas and participated in similar activities to the other camp goers.

Of note, the bionic pancreas was not completely autonomous: both groups required twice a day fingerstick glucose-checks to calibrate the CGM and required manual input of meal start times. 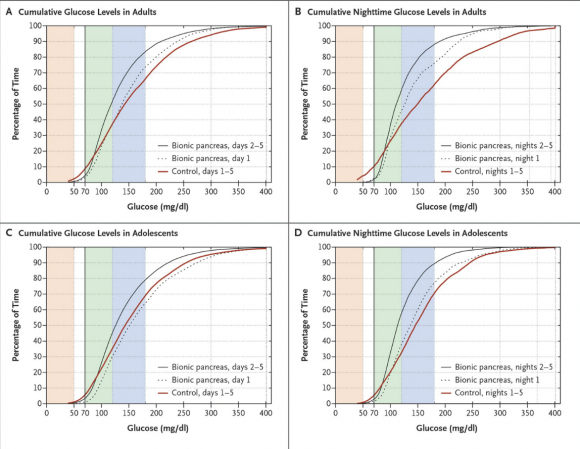 When analyzing the data, the adult study showed that the bionic pancreas resulted in improved glucose levels vs the control group on days 2-5 (day 1 served as a calibration period), with lower time spent in hypoglycemic range. (Pictured in the above image; look at total time spent in the green range)

The adolescent study also demonstrated improved glucose levels with the bionic pancreas, although time spent in hypoglycemic range was only equivalent to the control group. Therefore, the authors concluded that “as compared with an insulin pump, a wearable, automated, bihormonal, bionic pancreas improved mean glycemic levels, with less frequent hypoglycemic episodes, among both adults and adolescents with type 1 diabetes mellitus.”

News of the Bionic Pancreas Takes the World By Storm

Within a standard news cycle, articles highlighting the success of the futuristic artificial pancreas graced the top media outlets: US News & World Report, WebMD, USA Today, NPR, Huffington Post, NY Times, TheVerge, Boston Globe, FoxNews, CNBC, and Bloomberg all ran their own coverage of the story. The widespread appeal of the successful bionic pancreas studies demonstrates the public’s current fascination with digital health. The potential for “wearable” sensors and gadgets to completely fix a chronic medical condition that frequently affects patients at a young age perfectly embodies the hope for technology in medicine. Hopefully, such widespread attention will result in further fundraising to support innovative research efforts such as this.