The FDA has approved the CardioMEMS device, an implantable pulmonary artery pressure monitor intended for patients with NYHA Class III heart failure who have been hospitalized in the past year.

The device, implanted via a right heart catheterization, sits in a relatively distal pulmonary artery and is fixed into position by two nitinol wire loops. Perhaps the most notable component of the device is that it does not require a battery to function or communicate with external readers. Pressure data and heart rate are measured and transmitted to the patient’s physician for review. 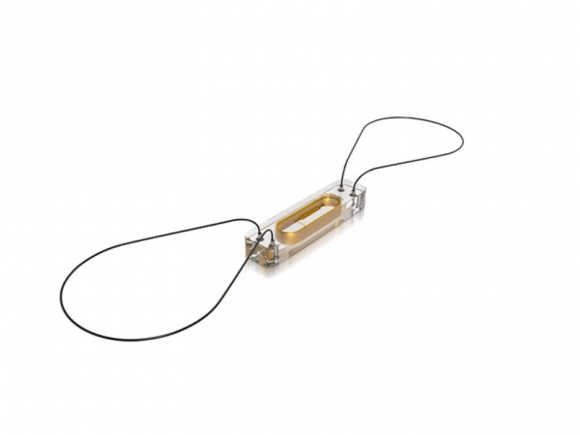 Accordingly, with this approval in hand, St. Jude has announced it plans to exercise an option to acquire CardioMEMS and possibly integrate the device into its Merlin remote monitoring platform; that raises some interesting possibilities both around strategies for actually using the PA pressured data and integration with data from other cardiac devices.

As described by CardioMEMS,

In CHAMPION-HF, approximately 500 patients received a CardioMEMS device and were subsequently randomized to a treatment group in which clinicians had access to the data and a control group in which they did not. In this study, they demonstrated an approximately 30-40% reduction in hospitalizations during the follow up period as well as an improvement in symptom scores. There were a total of 15 serious adverse events which were primarily periprocedural including: 4 bleeding complications, 2 arterial embolizations related to anticoagulation interruption, and 1 delivery system failure requiring device retrieval.

Integration with St. Jude’s Merlin platform also raises some additionally possibilities. A particularly interesting and relevant feature is Mobile Direct Alerts, which send customized notifications of prespecified events to a clinician’s mobile device. That these alerts are customized raises the prospect of a similar rule based notification system for CardioMEMS data based on changes in PA pressure.

In addition, many patients with a CardioMEMS device are likely to have a pacemaker, ICD, or CRT device raising the possibility of integration of multiple data streams. For example, these devices can track heart rate (including variability/ranges), arrhythmia occurrences, metrics related to activity levels using embedded accelerometers, and fluid status using transthoracic impedance. Perhaps somewhere in this mountain of data, we’ll ultimately find a set of metrics to follow that can help identify worsening volume status or hemodynamics earlier – before patients are in distress and rushing to their local emergency room.

When the device was initially reviewed by the FDA in 2011, it was rejected in large part due to the involvement of the sponsor in the trial itself. Company nurses regularly communicated with clinicians and make recommendations about therapeutic adjustments, raising concerns about whether this involvement is really what drove the benefit.

The unpublished follow up data submitted to the FDA demonstrated that in the 6 month to 12 month period, when control patients crossed over, their hospitalization rates improved with an absolute reduction about 8% at 12 months. However, the quality of life improvement was lost by 12 months. It was ultimately concluded that the number needed to treat to avoid one hospitalization was 3-5; and each of those 3-5 patients required a hospitalization for implantation. Based on the updated data, the panel voted 6-4 that the benefits outweighed risks despite voting 7-4 that the device was probably not effective. In their recommendation, the panel advised a post-approval study to further evaluate the device with some panel members suggesting that their yes vote hinged on the relatively low risks they saw with the device coupled with suggested but unproven benefits. With this post-market monitoring, the device’s performance outside of the trial setting and in a more diverse population than the predominantly older white male population of CHAMPION-HF will be under particular focus.

On the other hand, perhaps the release into the wild will allow clinicians to explore the use of a novel data source on its own or in combination with other remotely captured data streams and possibly define a novel approach to improving heart failure management.