A company out of MIT is developing an implantable birth control device is being developed that can be controlled remotely.

The 20 x 20 x 7 mm device, developed by MicroCHIPS, is designed to be implanted subcutaneously in the buttocks, upper arm, or abdomen. It delivers a 30 microgram dose of levonorgestrel daily. The drug is held in reservoirs on the microchip. The seal of the reservoir is melted by sending an electric current through it. Using wireless technology, the device can be switched on and off with a total system lifespan of up to 16 years. 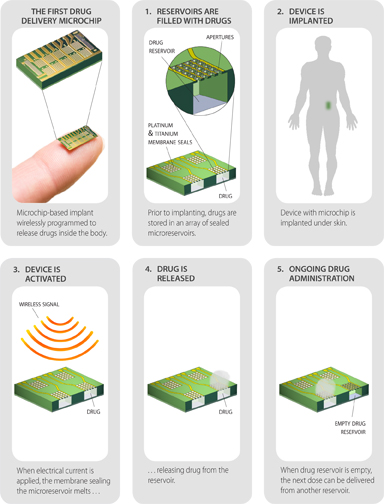 The idea for the device arose during a visit from Bill Gates to Robert Langer’s lab at MIT. Langer was asked if a birth control method that a woman could turn on and off was feasible. Langer, who was one of the developers of the controlled release microchip, thought it could be used for that purpose.

But don’t expect to see this device on the shelves of your local pharmacy any time soon. Studies need to be done to evaluate the safety, reliability, and efficacy of the device. Women will need to be confident that the device truly is on when they think it is and off otherwise. Beyond that, the device will also need to be secure so that other people cannot secretly adjust it. If the array of current implantable devices is a guide, we can expect a proprietary control system rather than integration with consumer devices at least in the beginning. That being said, integration with consumer mobile devices is probably not that far off given that they are being used in artificial pancreas systems.

Plans for this platform don’t stop with birth control, as MicroCHIPS describes it as a tool to not only deliver an array of drugs but also for patient monitoring. Currently, the are also testing drug delivery for osteoporosis, multiple sclerosis, and hypoglycemia.