South Korean researchers have developed a wearable device that captures body heat and converts it to electricity.

The team, led by Professor Byung Jin Cho of the Korea Advanced Institute of Science and Technology University, is able to produce approximately 40 mW of power.

The device–a thermoelectric generator–is small, light, and very flexible. It contains all the characteristics necessary for it to be functionally wearable.

The device produces a very small amount of power (approximately 40 milliwatts). As a comparison, your low energy home CFL light bulbs use at least 10 watts (250 times more power). Despite the small amount of power, this is still an exciting development. As the technology is refined to be as efficient as possible (to produce more power) and devices are made more efficient (to require less power), the gap will begin to close. There is potential for small wearable generators to be used to continually charge implantable devices such as pacemakers in the future. 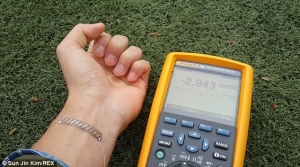