Android will soon have the ability to share data amongst health apps and devices on the new Google Fit platform, announced at the Google I/O developer conference keynote in San Francisco. The platform will allow apps to not only draw data from various devices — such as Polar and Nike+ wearable trackers — but also allow apps to access on-phone sensor devices, edit the user’s fitness history, and add data to their fitness history.

Conspicuously absent during the keynote were mentions of medical or healthcare industry data, such as that from electronic medical records. Epic, which runs the United States’s most widely-used electronic medical record system, has indicated that Epic Systems will work more extensively with Android later in 2014, but has not indicated whether it would integrate with Google Fit. 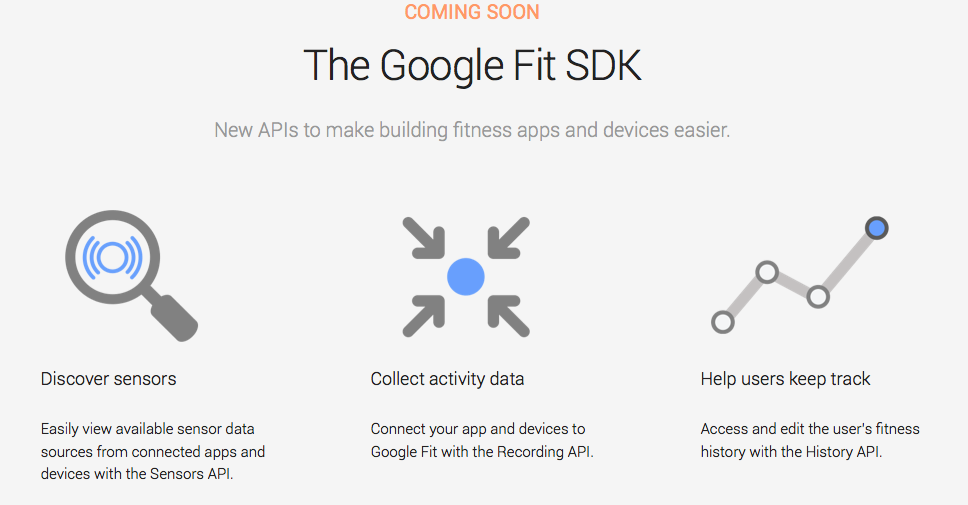 While not an application itself, the Google Fit platform is comparable to Validic, a platform launched by a North Carolina Research Triangle-based startup that standardizes data from numerous disparate fitness devices into one single accessible data programming interface. The story of Google Fit comes shortly after Apple’s own Healthkit platform was announced, which incorporates not just fitness data, but also health and medical data with integration into Epic’s medical record system — a potential game-changer for physicians  — and advisory content from Mayo Clinic.

Also notable is Apple’s inclusion of a user-facing Health app that provides users with a dashboard-like overview of data such as diagnostics, calories burned, calories eaten, sleep hours, vital signs, and even lab results. No such app has been announced with Google Fit.

Although Google shut down its Google Health personal health record project in 2011, Google has continued work in other healthcare-related initiatives. In 2013, it launched Calico, a start-up that focuses on solving age-related illnesses. Google Glass is used in medical diagnostics research, surgery, emergency departments, and medical education. And Google Helpouts, its fee-for-service HIPAA-compliant videoconferencing platform, has given users access to physicians, nutritionists, fitness experts, and mental health providers from mobile devices and the web.

The Google Fit software development kit (SDK) will be available to developers to use in fall 2014.