Spirometry measures lung function, volumes and air flow.  It is an important tool used for generating pneumotachographs, which are helpful in assessing conditions such as asthma, pulmonary fibrosis, cystic fibrosis, and COPD.

The Spirometry Interpreter & COPD Treatment application is a tool to help medical professionals interpret spirometry results and suggest treatment based on COPD severity. The app was developed by the At Home Sleep Clinic & Breathing Center.

One of the first things we notice about this app is its color scheme. The use of a bright light orange as background with reds, greens and cyan create an odd contrast that doesn’t make it easy to like.

The app’s only screen is composed of a series of sliders to adjust FVC%, FEV1% and FEV1/FVC. Moving these sliders to change the settings to our patient’s variables provides a one sentence interpretation of the condition and we can mark a check box to indicate if our data is post bronchodilation.

Since the interpretation is a single sentence long, the results are pretty basic, indicating whether or not it’s obstructive or restrictive and little more than that. The design impacts this as well as it’s not intuitive and at first, you don’t know where to expect the interpretation to appear.

The app contains a disclaimer and upon scrolling through it we discover that this app was created using MIT’s App Inventor, an educational suite developed by MIT used to teach programming which helps to explain the simplistic approach. 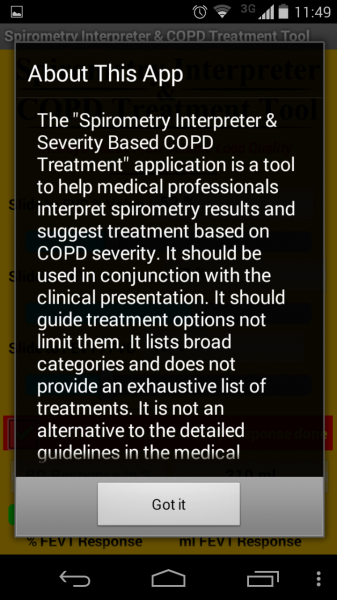 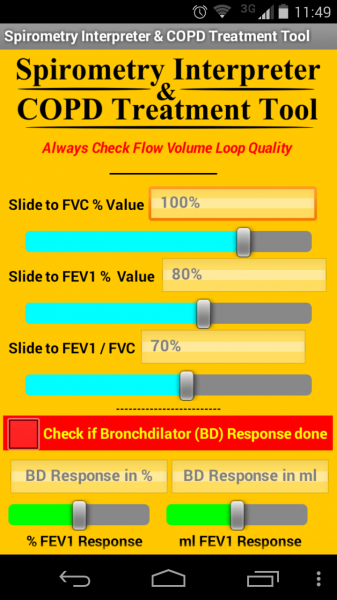 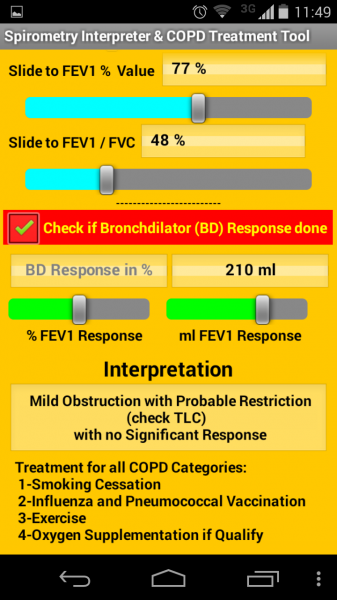