Several weeks ago, hardware manufacturer Jawbone surprisingly released UP Coffee, a simple, free iOS app that promised to be the simplest way to understand how caffeine affects your sleep.

UP Coffee can tie in the sleep tracking data collected by Jawbone UP devices, but also operates independently as a tool to help users become more aware of how their bodies process caffeine, and how UP users collectively consume caffeine.

I’m a huge fan of Jawbone’s UP24 and corresponding UP app, and was eager to give the UP Coffee app a spin.

After 3 weeks, the app proved to be basic, but delightful and insightful to use. On one hand, the app is far from being scientific or ground-breaking, but on the other, it still succeeds in achieving its simple goal of causing its users to be more aware of how caffeine affects them.

Caffeine is omnipresent. It can be found in coffee, tea, sodas, candies, and even medications (such as extra strength aspirin). As a society, we are meticulous in tracking usage of medications, recreational drugs, and nutritional supplements, but caffeine often flies under the radar. While we frequently take advantage of its stimulant properties in the morning or final stretch of an overnight shift, we overlook these effects when drinking a diet coke with dinner.

Personally speaking, I remember believing that caffeine didn’t affect me until medical school forced me to actually start sleeping and waking up at uncomfortable hours. Primary Care Providers frequently discuss sleep hygiene when counseling patients regarding excessive daytime sleepiness, which includes avoidance of caffeine after mid-day. In short, many people underestimate the effect caffeine has on their sleep. 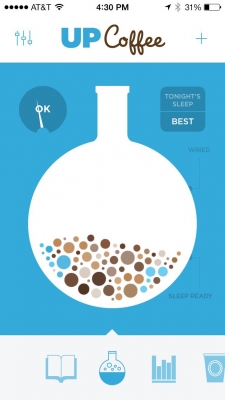 The Jawbone UP Coffee app is extremely simple in design and ambition. In the same way activity tracking apps try to motivate users to be more active, UP Coffee aims to track caffeine intake in hopes of encouraging users to better understand their own susceptibility to caffeine. For Jawbone UP device owners, this caffeine activity is compared with sleep data in order to generate graphs and trends.

The UP Coffee user interface is quite pleasing. When first signing up, the user inputs their gender, height/weight, target bedtime, and a rough estimation of their sensitivity to caffeine (ranging from not sensitive to extremely sensitive).

Then, the main screen shows a large flask with blue and brown dots swooshing around based on the motion of the iPhone (the above screenshot does not capture the movement physics). The brown dots represent caffeine. Every time a user consumes a caffeine-containing product by manually adding it via a list of common drinks/supplements/candies/medications, more brown dots pour into the flask. The more brown dots there are, the more the dots quiver nervously, representing the jitters one might get from too much caffeine.

Over time, the dots begin to disappear as the caffeine is eliminated from your system. The flask has two thresholds, marking when the user might feel wired or sleep ready. On the top right of this screen, there is a prediction for the quality of your sleep tonight. The flask graphics and animations were beautiful, fun, and accurately portrayed the physiology behind caffeine consumption and its elimination from the body. 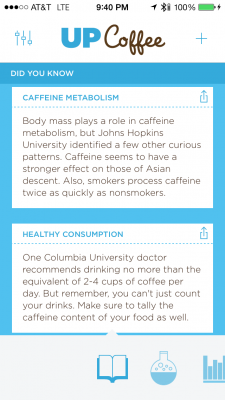 Much like their Jawbone UP activity app, Jawbone excels in promoting user engagement. A significant limitation of the app is that it requires manual input of every source of caffeine. Despite this, I diligently continued to input my sodas and coffee, in hopes of learning trends related to sleep. The simple process of entering each drink educated me the about the amount of caffeine (in mg) in my go-to drinks. Diet coke had 59mg in 21 fl oz, and my tall Starbucks latte had 75mg. By raising my awareness of every mg of caffeine entering my system, I began noticing trends–a black tea when studying in the evenings made it harder to fall asleep at a reasonable hour.

In addition to the insights I gleaned personally, the app provides insights of its own. Each day, the app provides an interesting factoid regarding caffeine (see above for an example). Similar to the insights featured on the Jawbone UP activity app, these tidbits were interesting enough to capture my attention most days, and I even saw some of my friends share the factoids on their Facebook timelines. 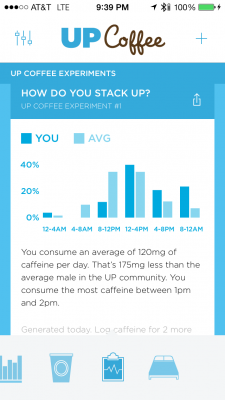 After using the app for 7-10 days, the app starts to display results from experiments, which provide insights based on your user data. Experiment #1 showed me that I am consuming an average of 120 mg caffeine per day, which is 175 mg less than the average male in the UP community. It also revealed that I consumed the most caffeine between 1 and 2pm. 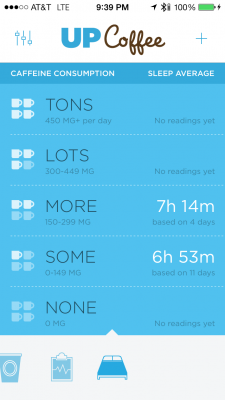 Experiment #3 tries to address the question of how does caffeine affect your sleep?  It (incorrectly) reported that I sleep 17 minutes longer for every extra 20 mg in my bloodstream. While completely incorrect, I don’t necessarily blame the app, because a third of the data it analyzed was taken during a week of vacation where I was sleeping in.

Since it was looking at duration of sleep rather than bedtime, it determined I was sleeping longer on days when I was consuming more caffeine, but in actuality, I was sleeping in because I slept later from the caffeine. Over time, with more data points collected on days where I have to regularly be at work by 8 am regardless of how late I sleep, I would expect the analysis to be more accurate. One point of improvement would be to add another experiment which looks at bedtime rather than duration of sleep.

Despite the incorrect conclusion from the above experiment, using the app consistently showed me that I was sleeping later and less tired on nights where I was consuming caffeine later in the day. While this revelation is a no-brainer, there’s something to be said about coming to this realization on a personal level. For example, while consuming less calories obviously will lead to weight loss, maintaining a food diary might more meaningfully reveal that cutting out a certain snack can lead to weight loss.

Conclusion: A Fun Way to Learn More About Yourself

To be clear, the UP Coffee App is very limited. It’s far from a medical-grade tool. It won’t provide any life-changing insights (we already know caffeine affects sleep). It requires manual input of every source of caffeine. The sleep analysis requires a Jawbone UP bracelet, and even then it might not be accurate in its calculations, especially if you don’t have a fixed wake-up time as it analyzes duration of sleep rather than bedtime.

Despite these limitations, its free to use, and its simplistic yet beautiful design combined with engaging factoids effectively draws you in. I find myself remembering to log my caffeine consumption in hopes of learning the results of its ongoing analysis, and along the way learned real-time about my own susceptibility to caffeine in the real world. In my experience, Jawbone’s strength is that they understand that the benefit of life-logging is in the process, rather than the raw data itself. While most users probably won’t use UP Coffee for more than a few weeks or months at a time, they can expect to enjoy the experience of learning about the interplay between their caffeine and sleep via this delightful app.

Users that would benefit from the app