One significant criticism of mobile health is the sheer number of “pilot” projects inundating the third world. Some countries, like Uganda, have even called for a moratorium on such projects. A recent PLoS Medicine paper noted that “in 2008 and 2009, approximately 23 of 36 mHealth initiatives did not move beyond the pilot phase.” Even PLoS Medicine’s editors have called for a technical reality check for researchers to continue the advancement of mobile medical projects, questioning the interoperability, open standards, and evaluation methods of mobile health projects.

One thing missing from this checklist: the user experience.

User interface designers and experts have cited numerous projects around the world as models for others – the Praekelt Foundation’s (@praekeltfound) MAMA project (@mamaglobal) in South Africa, the Ona records project in Kenya, and Medic Mobile. Their primary theme? Including the end-users in the initial design.

Matt Berg (@mberg), CEO for ONA, works on open-source data collection with assembling of medical records in low-resource situations in rural Africa. His team’s field tests found that, because healthcare workers don’t work in a linear way: they didn’t like seeing a series of screens. They wanted mobile tools that worked more like paper so they didn’t have to go from screen to screen. 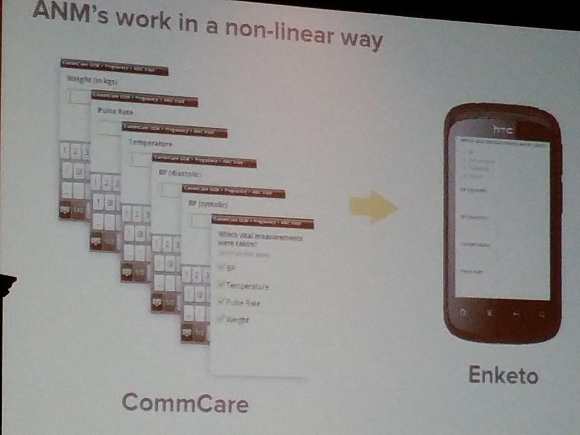 His team also learned that prototyping was important: they ended up making simple web versions of the app and PDF mockups to test on their users. This enabled his team to save lots of time in development.

Marcha Bekker (@marchaneethling), Head of Business Development for Praekelt Foundation, helped build an SMS system, mobile website, and a mobile app for MAMA to allow mothers to report their pregnancy experiences in areas such as South Africa and Bangladesh. Based on her team’s design experiences, they proposed 3 rules for designing a new app for resource-limited settings:

Design to understand the user

Dianna Kane (@diannakane) designs applications for Medic Mobile (@medic), a nonprofit that works to improve health services in more than twenty countries with technology such as SMS and mobile applications. She outlines some similar principles when designing applications:

With every project, Kane notes, her team seeks to understand current trends by producing needs assessment maps, group drawing activities — such as the one pictured here — and even “live sketching” in areas with no whiteboards by role-playing sets of interactions to help understand existing pain points and current problem-solving strategies. They have group participants imagine handing off data to one another as if they were applications or devices used by doctors, patients, and other types of users.

Kane’s firm also employs “sketch cards,” a way to design and brainstorm. It is ideal for language barriers. Instead of writing in a notebook, she would lay out certain cards with roles and actions written on them to allow users to design their ideal workflow. This can translate into an app design — such as a how and when dialog boxes should appear.

There are many ways to design an effective user experience. The important lesson we learned from these innovators though is that an important — yet often forgotten — part of any successful strategy is to engage with and learn from users.

These individuals spoke at the recent mHealth Summit in Washington DC