Samsung will probably be making the most mass produced wearable heart rate sensor of our time. At World Congress today, Samsung announced they will be adding a heart rate sensor in their new Gear 2 smartwatch.

The original Galaxy Gear was launched just 6 months ago to mostly negative reviews due to poor battery life, a slow user interface, and overall poor functionality. While the new Gear 2 addresses many of these features, the big change with the Gear 2 that is getting a lot of press is the lack of an Android operating system.

The new Gear 2 will be using Tizen instead. Tizen is a Linux based OS that Samsung has poured a tremendous amount of resources into.

Samsung isn’t the first company to create a smartwatch with a heart sensor such as Adidas’s Smart Run (although some would argue that the Smart Run doesn’t run non-fitness apps, so it’s not a true smartwatch).  However, the reason this is a big deal is Samsung’s Gear 2 will probably be the most mass produced wearable heart rate sensor to date. The current wearable devices that measure your heart rate are geared directly towards fitness and activity tracking. 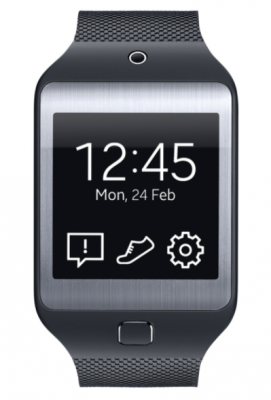 Samsung’s Gear 2 can obviously be used for fitness, but its target crowd isn’t the population that only frequents gyms. It is aimed at people who like the Pebble, and those who will be buying the upcoming Apple Smartwatch. The wearable heart rate sensor just went mainstream, and it’s going to be released in April of this year.