When we first reviewed Figure 1 we were impressed by the potential of a crowd-sourced community of physicians readily sharing medical images. Investors were equally optimistic, as Figure 1 raised $2 million in seed funding in December 2013.

The team at Figure 1 has gradually been converting potential into reality through a steadily growing and thriving community of users, with over one million image views per week. Not content to rest on their laurels, the Figure 1 team has been developing new features such as browseable image categories, and just last week simultaneously released their first Android app and interface for the web.

The idea of Figure 1 was born when Dr. Joshua Landy, an Toronto-based Pulmonary/Critical Care specialist, became dissatisfied with the paywalls of private medical image libraries and with Google Images’ lack of medical selectivity.

By creating a free platform that offers physician verification (via personal registration or Doximity integration), Figure 1 hopes to harness its rapidly growing community of physicians to create an easily accessible yet expertly-curated medical image library. 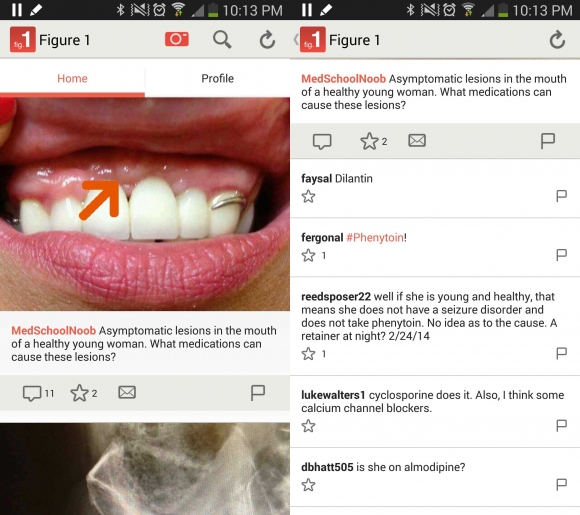 Compared with our initial review 6 months ago, the Figure 1 community has grown immensely, a vital step for any crowd-sourced platform.

The steady stream of new image uploads are met with multiple comments, with many comment sections exceeding 5 posts. Figure 1 tells us that each image uploaded is viewed thousands of times, and that the service is receiving over a million image views each week. Furthermore, the Figure 1 team highlights a particularly interesting finding or case each week in their Image of the Week mailing list. 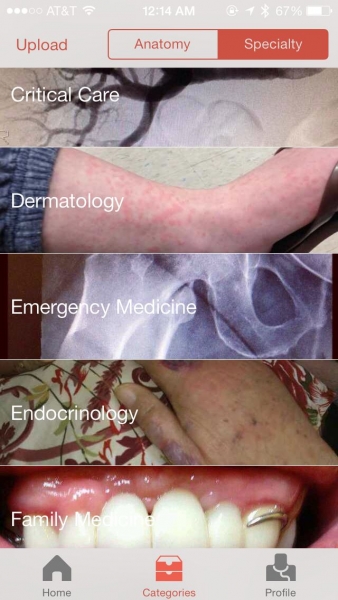 With a steady stream of updates, Figure 1 introduced the highly-anticipated image categories (by specialty or anatomy). This option allows users to casually browse the massive database topically and get a better sense of the impressive breadth and range of images in their library. In addition, the implementation of categories also allows other users to suggest alternative categorizations (each image can be in multiple categories) to assist in future discovery of these images.

Most importantly, Figure 1 expanded beyond the iOS platform by releasing a website interface and an app in the Google Play store. The Android app captures the feel and design principles of its iOS counterpart, and does not suffer from many of the bugs and shortcuts that makes some Android ports feel rushed. The Android app incorporates the same tools to de-identify photos by allowing the uploading user to block out faces, tattoos, and distinguishing features of patients. Unfortunately, image categorization has not yet made its way to the Android experience, but the Figure 1 team expects the Android and iOS team to have feature parity over the next few months. 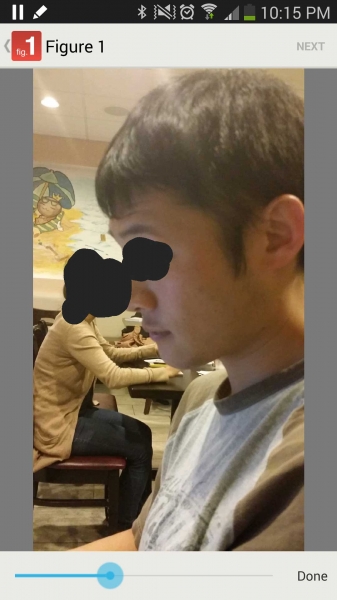 The website interface for Figure 1 does include image categorization and retains a clean, simplified, but highly functional user interface.

However, in its current form, the website is more of a read-only experience, allowing users to view and search the database, but does not allow for uploading of new photos or the posting of new comments. In this way, Figure 1 appears to be following the natural progression of Instagram in their calculated expansion to various platforms.

Figure 1’s expansion extends beyond the scope of software as well, as they are now available internationally in Ireland, the UK, Australia, New Zealand, the USA, and Canada. In the future, Dr. Landy plans to continue to innovate new ways at looking at and engaging in discussions by implementing a new interface and moderation structure in the next major app releases, which he anticipates will further enrich the overall user experience. At iMedicalApps.com, we’re excited to see how far Figure 1 has come, and eagerly anticipate what they have in store.