Editors Note — Fitbit has now recalled the Fitbit Force, please read this post to see why.

The same day my recent Fitbit Force and Jawbone UP24 comparison review hit publication, I got a text from my sister, an ED physician.

After receiving her Fitbit Force as a gift on Christmas, she began to develop a small rash on her left wrist in February, which she initially attributed to a bug bite. Putting two and two together, she realized the more likely suspect was the scattered reports of nickel allergies that hit the mainstream tech press in mid January. This led to a heartfelt public apology and generous return/exchange policy by Fitbit.

However, it appears this issue might be more widespread than initially believed.

Based on the Fitbit user community reports (a complaint thread over 160 pages long at time of publication) and iMedicalApps commenters, it appears that the rash might be more widespread than initially believed. The delayed timing of the occurrence of these rashes suggested a contact dermatitis or delayed hypersensitivity reaction, with many users not developing symptoms for over 2 months. My suspicion is that while the Fitbit Force launched in Fall 2013, widespread use increased after Christmas. This would be consistent with the small scattering of reports in late December/early January, with more widespread reports occurring in late January, early February, as evidenced by the community thread. 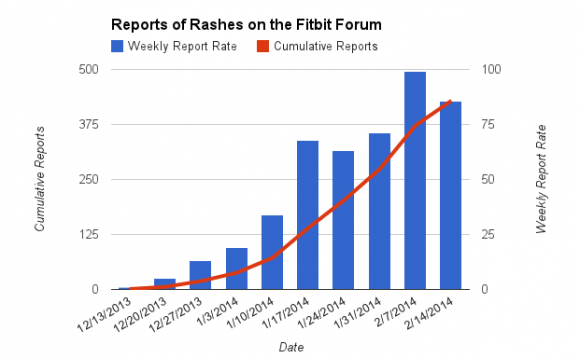 Reviewing the thread, the user community has been very proactive in sharing helpful information about their visits with dermatologists, and even compiled a useful spreadsheet with information on about 500 cases, including date of ownership, date of rash, and treatments attempted.

It appears that this issue affects users of all colors and all sizes, and is most likely allergic in nature given accounts that people are using stronger steroid creams (such as triamcinolone and fluocinolone) for treatment. While there are some very rare reports of this occurring with the Fitbit Flex (also worn around the wrist), the overwhelming majority of instances are with the Fitbit Force, which suggests the culprit could be the altimeter port (pointed out below) or charging port, both of which are not on the Fitbit Flex. 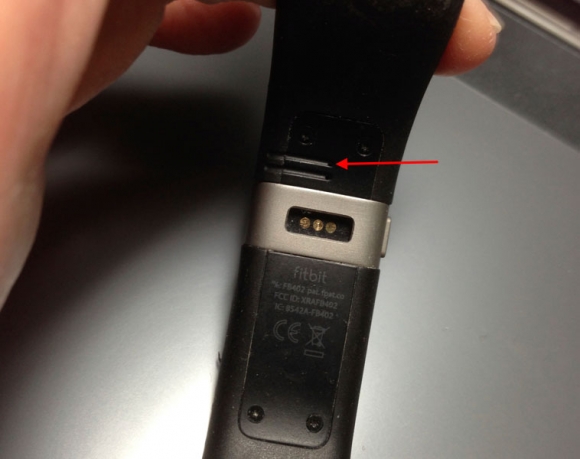 Curiously enough, the issue was initially attributed to nickel allergies, but some users are skeptical that nickel is the culprit. My sister, as well as many affected users, has never had an issue with other nickel-containing jewelry. As a remedy, some users have tried to cover the charging port with tape, without any alleviation of their symptoms.

In fact, one user named jasontproject writes that he had shifted the Force from his affected hand to his unaffected hand, added electrical tape to cover the entire grey metal surface and power opening of the back, and still began to develop rash-like symptoms within 6 days. He suspects the issue is with the altimeter port, based on the location of his new rash.

Regardless of what the issue is, the affected user community has been proactive in learning more about this issue, and while Fitbit has been faithfully honoring their policy of refunding or exchanging any culprit devices, some users feel that Fitbit should go farther as to halt product sales until the issue is identified and resolved. For now, we will keep a close eye on this issue, and try to raise awareness.

Sadly, this is not the first time hardware difficulties have significantly hampered a new fitness tracker launch. The initial Jawbone UP was temporarily removed from the market several years ago due to widespread issues with malfunctioning, with every owner being granted a full refund. It remains to be seen what will come of the Fitbit Force, but it looks like the rash isn’t going away, both for Fitbit and wearers of the Force.