The wide popularity of New Year’s resolutions suggests that people like tying personal change to a calendar event.

It seems we feel a new year is a good time for a new us, but do we feel similarly about a new month or a new week?

Evidence from 83,969 users who downloaded Smoke Free – Quit Smoking Now, between February 27th and 2nd December 2013 suggests that we do.

Smoke Free is a smoking cessation app that prompts users to complete a diary of their cravings over the past 24 hours. In addition, half the downloaders are randomly assigned to an experimental condition where each day for 31 days they are challenged to complete a mission designed to help them fall out of love with smoking, manage their cravings and recast themselves as a proud non-smoker. As such, it may be the first randomized control trial of smoking cessation performed with an app.

Looking at the aggregated data, we found several surprising insights that we share here in the hopes that we can guide others in the effective development of apps promoting healthy behavior change.

One interesting insight was when users tend to set their quit dates. Quit dates were most frequently set for the start of the week, with more set on a Monday than on a Friday and Saturday combined. The effect is even more pronounced when looking at quit dates throughout the month; more than double were set for the 1st than for any other day. 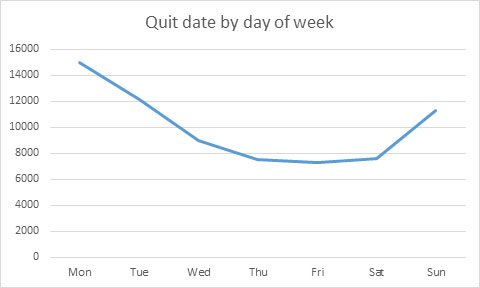 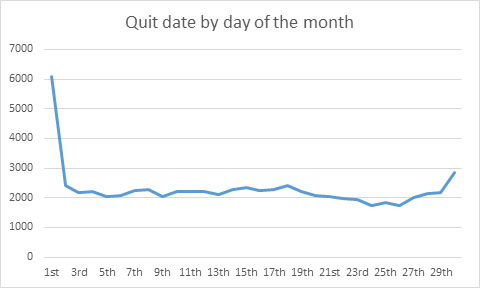 However, this doesn’t mean the 1st is also the most popular day of download, as the data also reveals that people are much more likely to seek out the app after they’ve begun their quit attempt. More than a quarter set a quit date up to seven days in the past compared with only 9% who set one up to seven days in the future. In total, 42% of people said their quit date was prior to the download date and only 15% said they were yet to start. 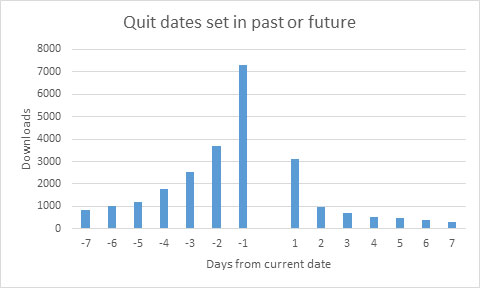 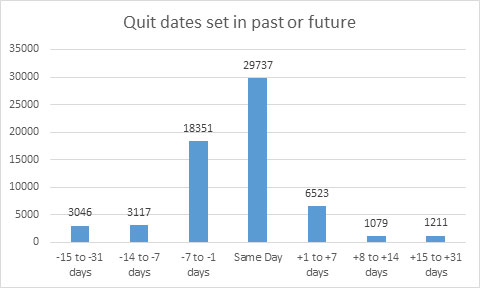 Whether this is because people don’t want an app to help with change preparation (as opposed to executing the change) or whether it’s that they don’t expect an app to serve this purpose is uncertain. It may also be that individuals are not aware of available tools, something which that may suggest that healthcare professionals are not making app recommendations.

What’s more clear is the value they find after this point, with a large number of the reviews on the iTunes store talking positively about the calculators indicating money saved, cigarettes not smoked and health improvements made. If we assume that patients are in the action stage rather than in a preparation or contemplative stage, then apps should be tailored to that frame of mind. Perhaps apps that focus on giving people a sense of progress could help people maintain the kinds of lifestyle changes that smoking cessation, weight loss, exercise uptake and alcohol reduction entail.

Again, these are some of our observations as we look to continue to improve Smoke Free – Quit Smoking Now. Please share your own findings, observations, and thoughts below – learning from the experiences of others can help guide the development of better apps that drive healthy behaviour change for our patients.

David founded one of the first web development agencies in the UK and has 20 years’ experience building web sites. He’s recently decided to use his powers for good and has started a PhD on developing an app to help people reduce their consumption of alcohol. His web site is: 23.co.uk