Physician’s 2 year review of GymPact, now called Pact, an app that pays you for exercising

This is a revised version of our January 2013 review of GymPact, updated with new screenshots and insights into the app that allows you to earn (or lose) money by going (or not going) to the gym.  On 1/1/2014, GymPact rebranded as Pact and introduced new goals for dietary tracking. This review will be later updated to reflect these changes.

With the New Year just behind us and excess holiday weight still lingering, many patients and health care providers alike resolve to get in shape and lose weight, hoping this year can be the one where lasting change begins.

Thankfully, that process started two years ago for me, and I lost 25 pounds! (I did re-gain about 10 pounds in 2013 due to my preparations for passing my internal medicine boards). My success is partly thanks to GymPact, a free, simple app that pays you when you go to the gym, and fines you when you don’t.

It almost sounds too good to be true, but it’s not. 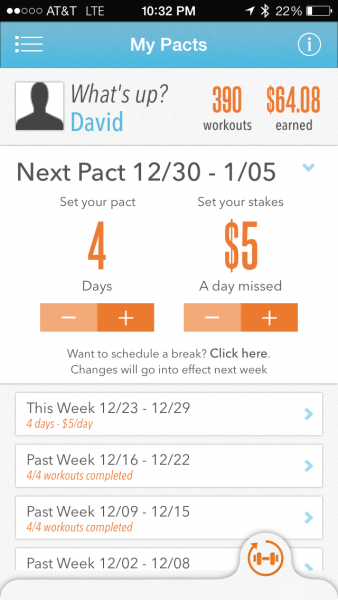 GymPact, which debuted in January 2012, was created by a pair of Harvard students who were inspired by the simple behavioral economics principle that people are more motivated by NOT losing money than by simply earning money.

Therefore, GymPact asks users to make a two-fold commitment: for each week, they must in advance 1) set a target number of gym visits for the upcoming week and 2) agree to a fine ($5-$50, the default is $5) for every number of visits they fall short of that goal. Then, at the end of the week, those that succeed in carrying out their pact are rewarded the money paid out by the users who did not meet their goals. (This amounts to approximately $0.25-$0.60 per workout). As GymPact’s popularity has grown, the payout has dropped, especially in the first several months of the year when users are more highly motivated (For reference, payouts were originally $0.50-$0.75 per workout).

In order to verify that you are in fact going to the gym, visits are logged via GPS check-in via the iPhone or Android app. There are a few simple rules to prevent users from taking advantage of the system:

On 1/1/2014, GymPact rebranded themselves as Pact and added two new nutrition-based goals, made possible by a partnership with MyFitnessPal.  An update to this review will be published after we are able to put the new features through their paces.

The App: Simple, and Gets the Job Done 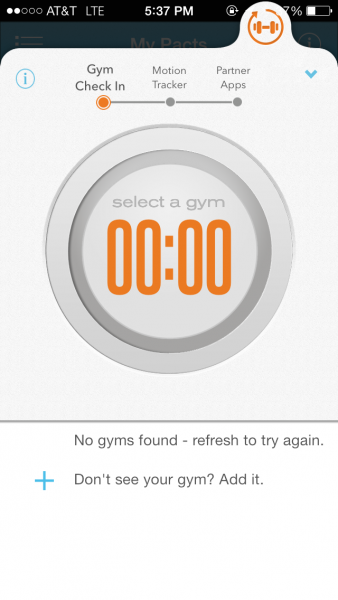 The app for iPhone functions exactly as promised. When arriving at the gym, you open up the app, tap Check In and then your workout has begun. From that point on, the GPS feature of your phone ensures that you stay at the gym for at least 30 minutes or the app will not formally count your session as a workout. If the location of your gym is not recognized, you can submit it to be registered in the future.

Upon completion of your workout, you simply tap the checkout button. In case you forget, the app will also check you out automatically once the GPS has detected that you are no longer at the gym. Newer updates with the GymPact app in 2013 allow for automatic checkouts to register, even without re-opening the app.

Via the profile screen on the app, you can quickly see how many workouts you have submitted and how much money you have earned. On the Settings screen you can also change your pact for the next week, withdraw your rewards  (via PayPal account), or schedule a vacation.

Newer Features: At-Home Workouts, or Use Your Activity Tracker 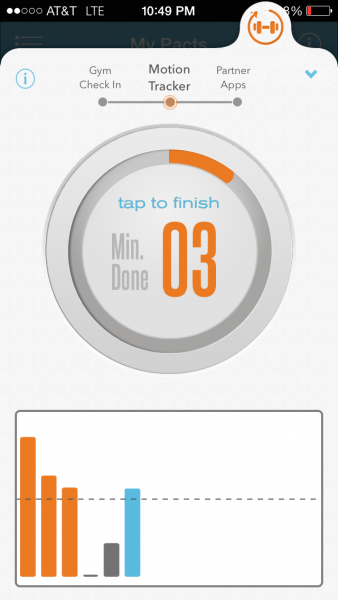 More recently, Gym-Pact has conveniently added two alternative methods for logging a workout session, which do not require a membership or visit to the gym.

The first option is titled Motion Tracker, and the user begins a session. Over the next 90 minutes, the user has to log a total of 30 minutes where the iPhone’s motion sensor detects a certain threshold of activity (the horizontal dashed line on the screenshot). The minutes do not have to be consecutive, allowing for resting or walking periods. The motion sensor seems to be sensitive enough to discern between real motion (such as running or walking) and inactivity. GymPact also continues to log activity correctly while the phone is locked.

However, it does not register activity when the GymPact app is not the primary app open. I don’t often use the Motion Tracker, but it does help out in a pinch. 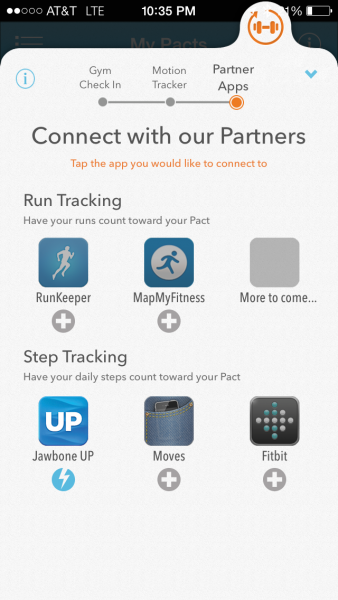 The second alternative is via third party partner apps, which include activity trackers (Fitbit and Jawbone products are currently supported) or iPhone apps (RunKeeper, MapMyFitness, or Moves).  Once you connect the GymPact app to your account with the partner app, workouts will be automatically imported from third party workouts. For example, hitting my daily goal of 10,000 steps on my Jawbone UP24 registers as a workout. This allowed me to automatically count a day-long trip to Disneyland as a workout (and rightfully so!).

The availability of these additional options significantly upgrade the user experience with GymPact. Prior frustrations with being caught being in an underground gym, or with an unexpected gym closure (on a holiday, for example), no longer prevent users from meeting their goal.

In my previous review, I described GymPact’s customer service as excellent, always being quick to credit missed or glitched workout sessions. However, I have noted that the customer service experience definitely dropped a notch in early 2013, likely due to increased popularity at the turn of the year.

One of my close friends actually stopped using GymPact because they never properly credited his $5 introductory credit despite several e-mail exchanges with customer support. He also was frustrated because of multiple workout sessions that did not get properly counted or remedied, despite contacting customer support.

Likely in response to these concerns, GymPact revamped their customer service reporting tool and workflow for missed workouts. Now, there is an established 24 hour window after each workout where the user will receive priority service, and penalties/fees will not be assessed until these issues are resolved. If the complaint or issue is reported after that 24 hour window, it becomes more difficult to make sure the workout is properly counted.

The upside to the new 24 hour reporting window is now that missed or glitched workouts are more easily corrected when the user reports the issue within that window.  However, the downside is that there is less lenience, so be sure to report any issues in a timely manner. Also, other non-workout issues take longer to get addressed.

At this point, I would rate the customer service as good, but I would highly encourage users to be vigilant and make sure workouts are being counted, and to be quick to report any errors. Hopefully, the new customer service workflow will better handle the influx of new users at the beginning of 2014.

After 2 Years of Use: I’m STILL a Believer 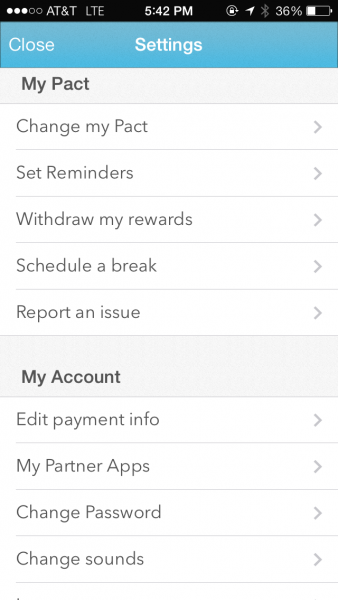 GymPact beautifully executes a very simple concept of using negative reinforcement (a monetary penalty) to promote positive behavior (going to the gym). Both its business model and utility for end-users are fairly transparent: motivate users to work out by giving a fine to them if they do not reach their goal. Throughout the past year, many of my concerns and doubts have been relieved. Initially, I was suspicious that the service would flounder due to people cheating the system, leading to a lack of penalty payments being distributed to reward those who completed the pact.

However, the reality is that the actual reward (averaging out to about $0.25-0.50 per workout) is so small that it provides very little incentive to cheat, though, it is still enough to provide satisfaction for the honest users. If anything, it seems that the service is thriving as they are now expanding to the Android platform, and have been quick to fix bugs and add additional features (such as Runkeeper integration, and support for the taller iPhone 5 screen).

Most importantly, though, the app brings about real results. It doesn’t take a medical degree to realize that going to the gym is directly correlated with increased physical fitness. When I first started going to the gym regularly, GymPact was clear motivation for me to workout, especially earlier in the week, rather than pushing off workouts until later.

As a result, logging my sessions and going to the gym became habit. The pacts also motivated me to continue going to the gym during residency months where I would otherwise have not, such as my night float rotations and ICU/Wards months.

Obesity and physical inactivity is an epidemic that directly affects medical outcomes. Patients and doctors alike are guilty of not taking serious initiatives in making lifestyle changes for the sake of their physical well-being. GymPact is a simple but powerful tool for the iPhone (coming to Android) that effectively helps users embrace going to the gym, and rewards them financially for doing so. More satisfying than the $140 or so that I’ve earned, however, is the improvement in my waist line and overall sense of healthiness.