How innovation in mobile health is reshaping mental health

Psychiatric health conditions and behavioral issues received greater prominence at the 2013 mHealth Summit, with presentations and panels given by prominent national researchers. This focus comes at the right time, when today’s mental health system is extremely dysfunctional.

“Most highly trained staff do routine, low-value tasks,” Doub says. “Our psychiatrists—our most scarce resource—are doing routine med checks, and not focused on the most complex, hard problems.”

Here’s our roundup of some of the most interesting work being done to use mobile health to improve mental health. 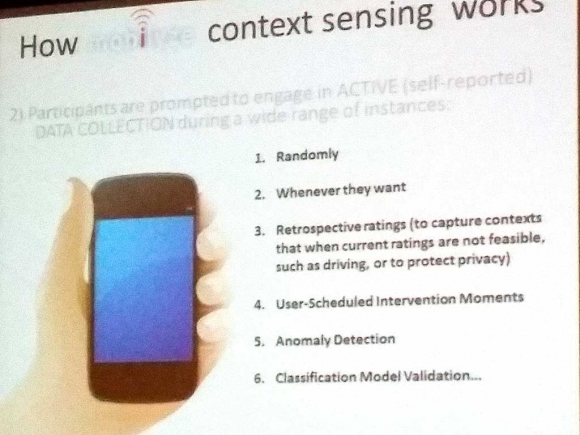 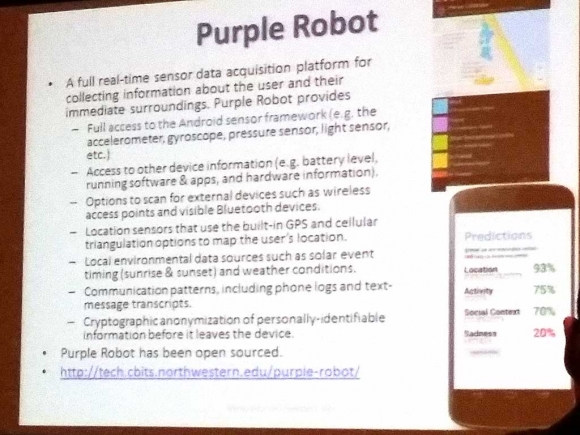 “We see a lot of people using external sensors,” Mohr says, “but one problem…in mental health is that if you ask someone to wear a sensor, they may not do it. Most people with depression don’t even take their medication on a regular basis….but most  people carry their phones.”

Mohr’s group at Northwestern University has released Purple Robot, an open-source Android sensor framework, that has been tested and used in research projects. His future projects will look at retrospective prompting of patients for mood assessments at moments in time in which a patient may not want to answer questionnaires.

Another researcher, Dror Ben-Zeev PhD, presented at the NIH Pavilion on his work with schizophrenia management applications at Dartmouth University’s Center for Technology and Behavioral Health, a subset of the Dartmouth Psychiatric Research Center. His team’s system, FOCUS, uses innovative techniques such as sleep modeling which uses a combination of device lock time, ambient light, and ambient audio to predict sleep times within 40 minutes of patient-reported sleep time without requiring the device to be placed under a pillow. 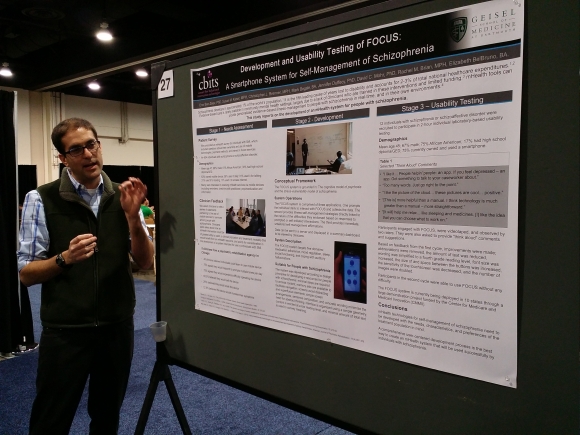 “We’re optimistic about the acceptability of this with high-risk substance use disorders & homelessness for people with schizophrenia,” Ben-Zeev says. “Up to 65% of patients with severe mental illness now uses these technologies,” referencing an earlier survey his team published in 2013 in Administration and Policy in Mental Health Services Research.

Ben-Zeev’s current project, CrossCheck, involves both the patient and treatment team to help prevent relapses by both messaging a patient during a possible relapse with interventional tools and alerting the patient’s treatment team to perform a home visit and act on a previously-determined plan.

Overall, more work needs to be done not only on technology interventions, but also within the culture and politics of psychiatric disorders. The Mental Health panel agreed that resistance within the mental health and substance abuse industries prevents innovation from occurring.

We can hope, however, that given the current state of affairs in mental health, innovators like those cited above can help mitigate these concerns and bring useful new tools to patients in need of them.

Steven Chan, M.D., M.B.A., is a resident physician at the University of California, Davis Health System, researching psychiatry, telemedicine, mobile technology, & human behavior. Steve previously worked as a software and web engineer as well as a creative designer at Microsoft & UC Berkeley. Visit him at www.stevenchanMD.com and @StevenChanMD.