Diagnose app can help you make evidence based clinical decisions

Evidence based medicine is the use of mathematical estimates of the risk of benefit and harm (derived from high-quality research on population samples) to inform clinical decision-making in the diagnosis, investigation or management of individual patients.

In practice, it requires clinicians to contextualize the best available research evidence by integrating it with their individual clinical expertise and their patient’s values and expectations.

Diagnose is a medical app available for both Android and iOS that attempts to aid physicians in the difficult task of providing evidence based diagnosis through the use of pre and post-test probabilities and likelihood ratios.

Diagnose is a simple to use medical app. It provides us with a list of diagnoses or conditions we can tap on. There is a search feature available to help us find conditions faster.

So let’s say you have a patient who you suspect might have COPD and you pull up Diagnose to make sure. We know that he’s been a smoker for the past 10 years but he smoked less than 70 packs year so we tap on Smoking ever to mark that as positive, then we tap on Smoking > 70 pack year until we marked that as negative.

He’s coughing a lot so we mark Coughing as positive as well. That put our post-test probability to 20%. 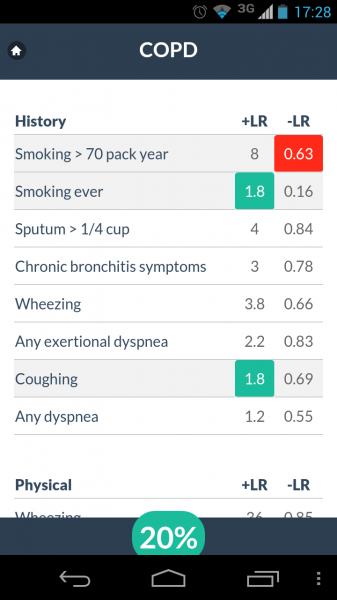 During our physical examination we notice that he’s wheezing a lot and has decreased breath sounds. Upon tapping those as positive findings, Diagnose updates the post-test probability.

Obviously, if you’re concerned for COPD, it’s important to have pulmonary function studies performed at sometime, and using this tool, it could lead you towards getting these studies done on your patient. 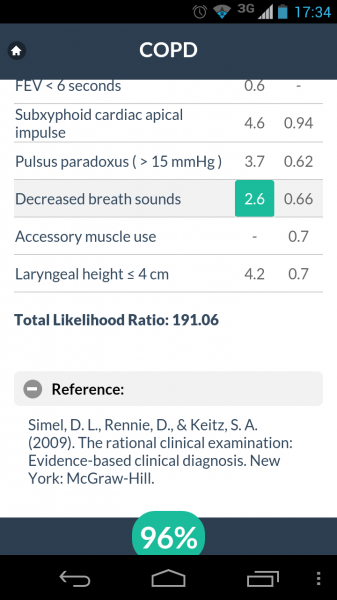 Having an intro tutorial to likelihood ratios would have helped make this app friendlier to physicians new to evidence based practice. 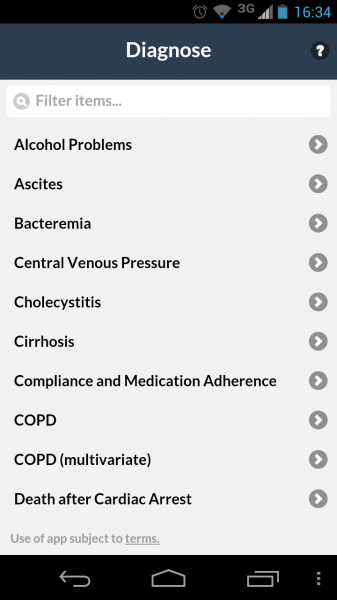