Basis B1 Band review, a wearable sensor that tracks many metrics, but not for everyone

As the wearable fitness and activity tracker market has evolved, the Basis B1 Band has set itself apart by adding multiple sensors (heart rate, skin temperature, perspiration) at an added cost ($179 – the price was dropped from $199 in January 2014 with the introduction of a 2014 Carbon Steel Model).

Even at first glance, Basis Science went in a different design direction than other trackers on the market: the B1 Band looks essentially identical to any other retro digital watch, complete with an always-on digital watch face.

Since its launch in the 1st half of 2013, the Basis experience has consistently been improved, with the introduction of mobile apps, and software/firmware upgrades introducing features such as  “Body IQ,” which accurately and intelligently detects walking/running/biking in real-time. In January 2014, they announced a new software update which introduced Advanced Sleep Analysis to identify REM cycles during sleep.

With the Basis B1 Band’s approach, does more equal better? Yes in most cases, but the B1 may not be for everyone.

Hardware: Beneath the Surface of an Unassuming Retro Digital Watch… 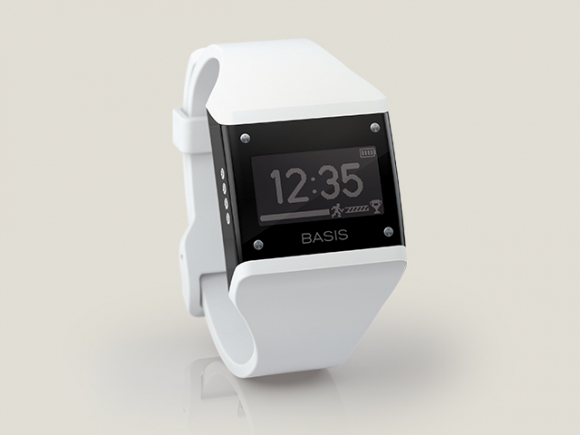 Whereas competing activity trackers adopt a somewhat futuristic, sleek, form factor, the Basis Band disguises itself as a standard, retro-style digital watch. While not as massive as some popular men’s analog watches, the B1’s digital watch face is not small. From pictures, I was concerned it would be too thick, but its design hides its girth pretty well.

The face of the B1 has four silver, touch-sensitive pins in the four corners of its surface that allow for easy scrolling through data–time, date, steps, calories burned, heart rate, and total amount of daily time spent running/walking/biking.  Underneath the time, there is a horizontal progress bar that displays a rough at-a-glance view of how far one has gone toward reaching the 10,000 step count (which can be adjusted via mobile app or website). 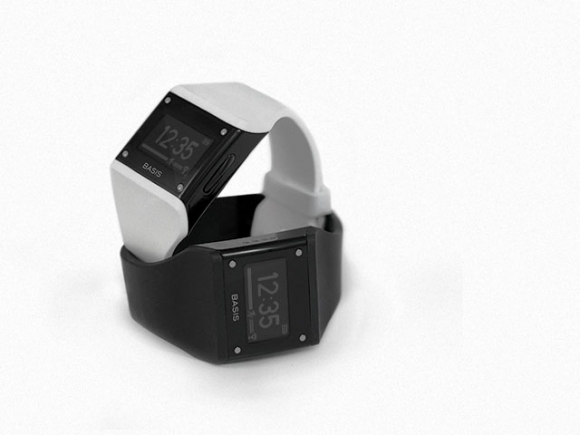 To be perfectly honest, I was concerned that the display would be bland or boring, but the font was quite readable and modern. The always-on display cannot be overstated enough, and it puts other activity trackers to shame. Furthermore, the wrist straps of the watch can be easily swapped out for various colors, which significantly change the appearance of the watch.

Three significant concerns, though. First off, the battery life only lasts about 4 days, likely due to the inclusion of multiple sensors and the always-on display. Charging the watch every four days doesn’t bother me, but I wish there was a better early-warning mechanism for the low battery. On multiple occasions, I would unexpectedly find that the battery had died overnight or mid-day, or be notified of the low battery at a time when I couldn’t charge it.

Moreover, while the wrist band is adjustable to fit even the smallest wrists, the bulk and overall design of the watch is distinctly masculine in my opinion (and a casual sampling of my female friends).  Finally, there appears to be some issues with water leakage on some units despite being water resistant. The first B1 I received began to show condensation under the screen from wearing it while in the shower, which rendered the touch-sensitive buttons useless and obscured part of the screen. While this could be an isolated issue, I noticed the same issue mentioned in another review and in the official message boards. Thankfully, customer service was excellent and they replaced the item swiftly. 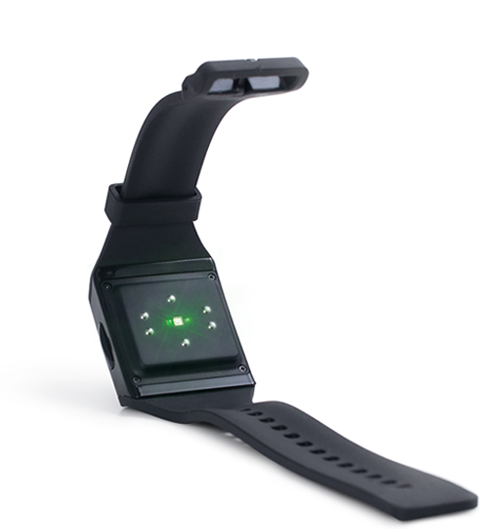 The Basis B1 Band one-ups most other activity trackers on the market by adding an optical blood flow monitor (to detect heart rate), perspiration monitor, and a skin temperature sensor to the standard 3-axis accelerometer. 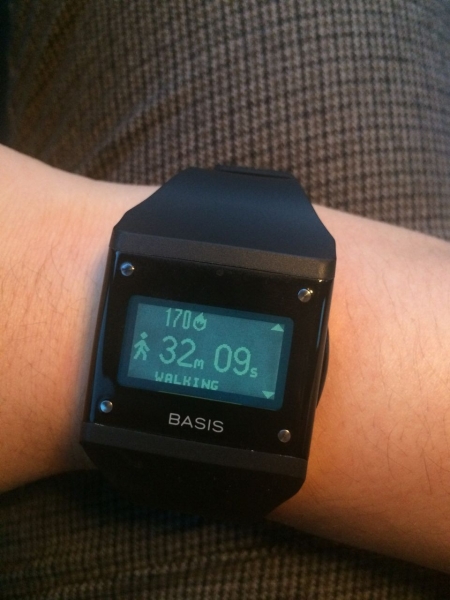 The multiple sensors absolutely shine when it comes to activity and sleep detection. In October 2013, Basis released a new detection algorithm called Body IQ which automatically changes the watch functionality when it detects certain activities: walking, running, or biking. Even if walking from a nearby hospital parking structure, the Basis Band will display a second line underneath the time showing how long you’ve been walking.

Furthermore, this time spent walking/running/biking will count toward a daily total that can be accessed by toggling through the display (see above image). The sensitivity of Body IQ was quite remarkable. When doing run-walk interval training on a treadmill, the Basis Band clearly distinguished each walking and running interval, accurate to within a few seconds. This is pictured below in the graph of my activity during a workout. In the left half of the image, a gray stick figure represents the periods when I was walking or running. 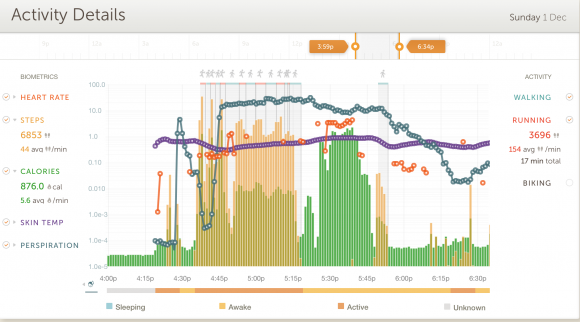 Adding perspiration and skin temperature also allows for more accurate measurement of activities that might not clearly count if solely relying on motion detection. For example, after the above interval training workout, I followed up my time on the treadmill with a short session on a recliner exercise bike, during which my hands barely moved. As you can see in the graph, the Basis B1 was able to detect that I was still active by the perspiration sensor (the dark green line), and appropriately increased the predicted number of calories burned (the light green bars), even though almost zero steps were registered (the yellow bars). The ability to measure this “activity” despite the lack of motion is essentially impossible with other competing products that simply utilize an accelerometer.

I was most impressed by the Basis B1’s ability to automatically detect sleep. With other devices, the user often forgets to trigger the onset of sleep detection, rendering that feature nearly useless. However, the Basis Band uses an intelligent algorithm with multiple sensors to accurately and confidently log duration and sleep quality. It’s eerily accurate, even logging short 20 minute naps during the day, with only rare false positives. During times of sleep, the Basis Band also records resting heart rate. As an endocrinology fellow, knowing when my diabetic patients are sleeping could provide significant insight into glucose patterns. When this review was written, their Advanced Sleep Analysis software update (announced January 2014) had not gone live, but given my positive experience, I have full confidence in its performance and accuracy.

On a down note, though, the heart rate sensor thoroughly disappointed me. The optical heart rate monitor’s Achilles heel is that it is only accurate and reliable when at rest. While great at measuring resting heart rate overnight, or while seated and watching a sporting event on TV, the heart rate sensor becomes almost unusable while in motion, only logging sporadic measurements (see the above image, where there are only a few HR data points, noted by the red dots).

Unfortunately, this limitation is not clearly noted in marketing material, and can only be found on their FAQ page: “Basis is designed to capture heart rate patterns throughout the day and night, and is a nice alternative when chest strap monitors are impractical or uncomfortable. Basis is not focused on minute-by-minute uses for traditional heart rate monitors like athletic heart rate training or medical uses. ” In my opinion, the failure to prominently disclose this limitation borders on false advertising. Thankfully, the Basis B1’s added benefits go beyond its crippled heart rate sensor.

With their website and mobile apps (Android and iOS), Basis Science utilizes an achievements system to motivate players with gamification principles. Titled Habits, you select a few achievements to strive for, and reaching these goals earns points to unlock and select additional habits. These habits range from a variety of topics, such as Wear It (simply wearing the band for over 14 hours a day) to Move It (being active for 30 minutes a day) as well as Consistent Bedtime (going to sleep every day within 30 minutes of a selected time). In addition to having daily goals, there are also weekly goals for achieving a certain number of days each week. Especially over the first month of ownership, the unlocking system provides motivation for interacting with the app and striving to achieve goals.

Until early November 2013, the iOS app was quite limited in scope. It essentially only showed a static view of your current day and where you were in achieving the day’s habits. However, a recent significant iOS update–and update to the website as well–brought about significant improvements, including the ability to see Insights, which is an overview of previous days, including sleep times and detected episodes of exercise, and the ability to unlock and view habits. With the current software version of the MyBasis app, the mobile experience is finally up to par with the other activity trackers, which each have thorough mobile apps.

The Basis Science team does an excellent job compiling the massive quantities of data points into an easy-to-understand interface. They split their web panel and mobile apps into three primary categories–Habits, Insights, and Data. The Habits panel focuses on your data via the above-described achievement system. The Insights panel simplifies each day into the main events each day–sleep and exercise (walking, running, biking). The Data panel is a very comprehensive look at the raw data, bringing up a complex graphing system which allows you to toggle on/off specific parameters (heart rate, skin temp, calories, steps, etc).

The only limitations to the software are as follows: 1) there is currently no method for diet or nutrition tracking, and 2) there is currently no third party app integration, so there is no sharing of data between other fitness/nutrition apps such as LoseIt! or MyFitnessPal. After enjoying these features in the offerings from Fitbit and Jawbone, these shortcomings are meaningful, especially at this price point.

Syncing: Manual Syncing is Getting Outdated

However, the trend in activity trackers seems to be going towards automatic, continuous syncing, which is now found in several competitors–the Jawbone UP24, Fitbit Force, and Nike FuelBand SE. I would expect future Basis Science products (the B2?) to incorporate the passive, continuous syncing that the B1 band sorely lacks. 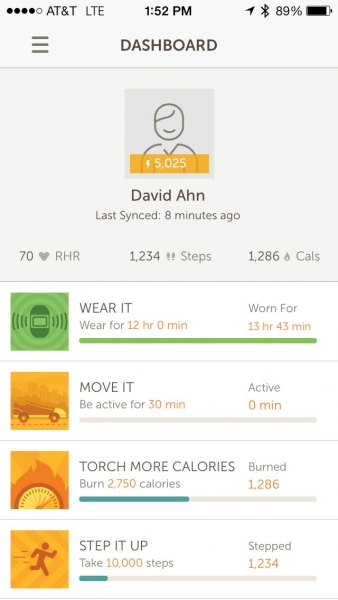 In short, the Basis B1 Band is an outstanding activity tracker, and clearly one of the most advanced on the market. Styled to look like a standard retro digital watch, the B1 blends right in (in a good way). The always-on time display is a no-brainer and frustratingly absent in the competition. The automatic sleep detection is incredibly accurate with respect to the initiation and end of sleep, and the newly announced software update for in depth sleep analysis and REM cycle identification should only widen the Basis Band’s lead on the competition when it comes to sleep analysis.

In real world applications, the activity tracking with the Body IQ easily ranks among the most precise of its competitors. This is done by adding skin temperature, perspiration, and heart rate sensors usually found in much more expensive products. Even the gamification process with the unlockable habits and achievement points helps motivate users for the long term.

However, with its $179 price point ($30 dollars more than even its priciest competitors), the B1 is not devoid of its own shortcomings and is not for everyone. Most glaringly, the lack of third party integration looms large as the Basis B1 offers no nutrition tracking support. Similarly, the much-hyped heart rate tracker’s disappointing failure to reliably measure heart rate during exercise borders on false advertising. Prior to the recent Fall 2013 releases of the Fitbit Force, Jawbone UP24, and Nike FuelBand SE, the Basis B1 stood head and shoulders ahead of the class. Now, it’s competitors (especially Jawbone and Fitbit) have an edge on the Basis B1 when it comes to third party app support (e.g. MyFitnessPal, LoseIt) and continuous, automatic syncing via LE Bluetooth.

Regardless, the Basis B1 Band is the ideal activity tracker for the hardcore Quantified Self devotee, but more casual consumers might be better served with the friendlier and more cost-effective Jawbone Up24 and Fitbit Force.